William was the son of Roger de Huntingfield[1][2] and Alice de Quincy.[2] His birth date is uncertain but was probably in about 1160.[2]

William married Isabel de Gressenhall before 1194.[2] They had the following children:

In 1194 he was in a dispute with his stepson William de Stuteville over his wife's dowry from her second marriage to Osmund de Stueville.[2] The following year he and his wife leased Wendling, Norfolk from the Abbey of St Edmunds, Suffolk.[2]

William entered royal service by 1203, when he was made interim custodian of Dover Castle, Kent while Hubert de Burgh was absent.[1] In 1208/9 he was an eyre justice.[1] He served as Sheriff of Norfolk and Suffolk in 1209/10.[1] In 1210 he sent knights to fight for King John in Ireland.[1] In 1213 he and Aubrey de Vere, Earl of Oxford, jointly accounted for customs duties for Norfolk and Suffolk.[2] In 1214 he was with King John in Poitou, where he witnessed a number of charters.[1]

The following year William joined with the barons who rebelled against the king. He was one of the Surety Barons for the Magna Carta.[1][2] Late in 1215 his lands were confiscated and he was excommunicated.[2] He gained control of Essex and Suffolk for the rebels[2] but King John then ravaged his estates in Norfolk and Suffolk.[1][2]

In May 1217 William fought with the rebel barons in the Second Battle of Lincoln, and was taken prisoner.[1][2] In October that year he returned to allegiance to the Crown, and his lands were subsequently restored.[2] In November 1218 he was present at the Council which limited the use of Henry III's great seal white he was a minor.[1]

William held lands in East Anglia, Lincolnshire and elsewhere, including Frampton in Lincolnshire.[2]

William died on crusade before 25 January 1220/1. His death place is unknown, but may have been in the Holy Land.[2]

"William de Huntingfield was another of the group of East Anglian landowners who were active in the opposition to King John. He had connections with Robert FitzWalter, the main rebel leader and one of the Twenty Five, and with another rebel, the Lincolnshire knight, Oliver de Vaux. He held seven knights’ fees of the honor of Eye in Suffolk, including the manor of Huntingfield, from which he took his name, and several knights’ fees of other baronies, including that of Lancaster.

"William entered King John’s service in 1203 as temporary custodian of Dover Castle, and acted as an itinerant justice on the eastern circuit in 1208-9 and as sheriff of Norfolk and Suffolk in 1209-10. He sent knights on John’s expedition to Ireland in 1210 and served in person with the king in 1214 on his failed venture to Poitou. The signs are that by instinct and upbringing he was a natural royalist.

"It is not surprising, then, that he was a latecomer to the opposition, turning against John only in 1215 and joining the rebels at their muster at Stamford in Easter that year. Like others, he may well have been moved by a sense of financial grievance, as he had offered speculative fines for favours, which had left him indebted, although John had offered some respite. After being appointed to the Twenty Five, he joined Robert FitzWalter and William de Mandeville in asserting rebel control over East Anglia and in offering assistance to Louis of France after his arrival in England. Like Richard de Montfichet, he was captured at the battle of Lincoln in May 1217, and in September two his knights came before royal agents to negotiate his ransom.

"William died before October 1225, leaving as his heir his son, Roger (d. 1257), and a daughter Alice, widow of the Lincolnshire knight, Sir Richard de Solars."

Images: 4
Topographical History of the County of Norfolk 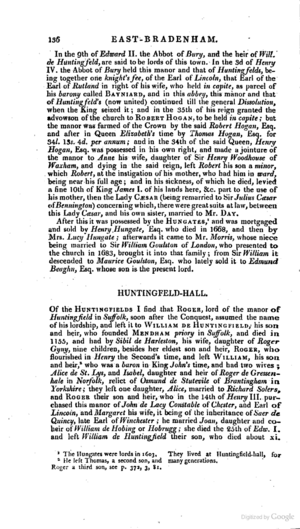 The Manors of Suffolk 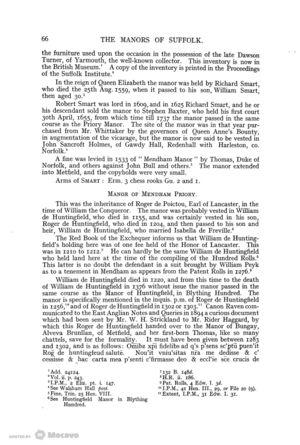 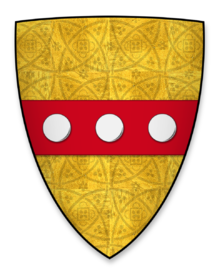 Michael Cayley
I have now finished the main work I intend on this profile, and created profiles for 2 children who did not have them. If anyone spots and typos or slips, please correct them, or message me. Thanks!
posted Dec 28, 2019 by Michael Cayley

Liz (Noland) Shifflett
Just to clarify - Frampton, Lincolnshire exists. A WikiTree category for it does not. I don't create wanted categories, and I'm not comfortable creating categories for other projects, so I deleted [Category:Lincolnshire] since that is now a "nopeople profiles category".

posted Jun 09, 2018 by [Living Hampson]
Shelley Freestone
https://en.wikipedia.org/wiki/William_of_Huntingfield
posted Feb 26, 2018 by Shelley Freestone
April (Dellinger) Dauenhauer
I agree with Chet Snow's reply to the same Comment as below from Chase Ashely on Robert De_Vere, which ends with:

"Respected genealogist Richardson does not so why should we?"