Besides military service, he also served in a civic capacity, with the Ottawa Public School Board as member representing St George's Ward and later chairman.[1]

He was a veteran of the Boer War and the Great War.[1] Ultimately his military career was 40 years starting with the Governor General's Foot Guards in 1874, then in 1878 with the Princess Louise Dragoon Guards for a time, but mostly with the Canadian Artillery Militia from 1887.[1][4]

For the Boer War, he was one of the first volunteers, organising the Artillery Brigade and commanding 'D' Battery. He earned the Queen's South Africa Medal with three bars (Belfast, Cape Colony, Orange Free State).[5]

When the Great War started, his offer of service was accepted despite his age in Feb 1916.[4] He organised the 3rd Division Ammunition Column and commanded in France, a unit in which his William also served.[1][4] He eventually commanded the 3rd Division of Artillery[4] was twice mentioned in despatches.[6][7] and was awarded the Distinguished Service Order for his services in France.[8]

In peace time before and after the Great War he was Inspector of Artillery stores in the Department of Militia and Defence, since Sep 1908.[1][4]

He was a 32nd Degree Mason, a Shriner and member of the Scottish Rite.[1] He was at one time president of the Ottawa Valley Motor Association and for 25 years he was a member of the Canadian Artillery Association.[1]

He died in 1922 and was buried in Beechwood Cemetery, Ottawa, Ontario.[9] 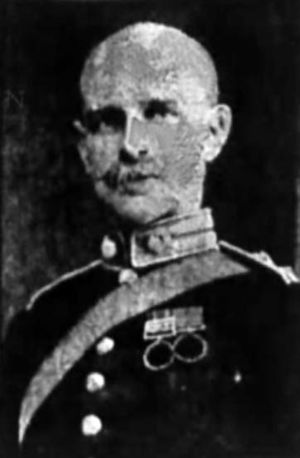