Zora Neale Hurston was an American award-winning leading pre-War black woman author of the early 20th Century, as well as an accomplished folklorist and cultural anthropologist. Her most popular novel, Their Eyes were Watching God, was published in 1937.

She was once both popular and acclaimed, but her reputation was later diminshied, and she died forgotten and impoverished, buried in an unmarked grave. Her posthumous rediscovery by Alice Walker led to her restoration in popularity and reputation as among the upper tier of the pantheon of black American authors.

Zora was born the fifth of eight children to John Hurston, a carpenter and Baptist preacher, and Lucy Ann Potts, a former schoolteacher. [1]

She was married three times, in failed marriages which produced no children; first to Herbert Sheen from 1927-1931, then in 1939 to Albert Price for seven months, then to James H. Pitts in 1944 for less than a year.[2]

Long believed, as recently as 1990[1], to have been born in Eatonville, Florida subsequent research has shown that she was actually born in Notasulga, Alabama, although her family relocated to Eatonville when she was very young.[3]

Zora cited varying dates for her own birth, leading to conflicting accounts in biographies until census records finally established that she was in fact born in 1891. [3]

Eatonville is thought to have been the first "all black" town incorporated in the U.S. Zora's father was elected there three times as mayor. [3]

Zora's mother Lucy died in 1904 when Zora was thirteen and her father then remarried. In her teenage years Zora lived with various relatives, while working as a maid for whites, and serving as a wardrobe girl for a traveling Gilbert & Sullivan performance company. [3]

From the fall term of 1917 through the spring of 1918 Zora completed her high school requirements at Morgan Academy (now Morgan State University) in Baltimore, again while working as a maid. [3][1]

During the summer of 1918 she worked as a waitress in a nightclub and a manicurist in a black-owned barbershop which served only white customers.[1]

While at Howard Zora published her early works such as her first short story "John Redding Goes to Sea" (1921).[3] That first story appeared in the campus literary society's magazine, the Stylus.[1]

In 1925 she moved to New York City where she became one of the contributors of the Harlem Renaissance.[3] There she attended Barnard College through 1927 on a scholarship, where she studied with noted anthropologist Franz Boas who encouraged her to pursue a degree in anthropology. During that time she did field work for Boas in Harlem.[3] She also then won second-place awards both for her story "Spunk" and her play Color Struck (both 1925). Also early in New York she published her story "Sweat" (1926) in collaboration with Langston Hughes.[1]

In 1927 with a fellowship from the Carter G. Woodson Foundation and later with financial support from arts patron Charlotte Osgood Mason, Hurston pursued cultural anthropological fieldwork, travelling to her native Florida, where she collected folklore and other material, as well as in Alabama.[3][1]

In 1928 she received her Bachelor of Arts degree in anthropology from Barnard College,[3]and also became estranged from her husband Herbert Sheen early that year. Zora finally divorced him on July 7, 1931.[1]

Continuing to write, she produced the highly regarded and successful early stories and novels "How It Feels to Be Colored Me" (1928), "The Gilded Six-Bits" (1933), Jonah's Gourd Vine (1934, a Book-of-the-Month Club selection originally titled Big Nigger, published by J. B. Lippincott, which would remain her steady publisher throughout her repeated successes of the next decade), and Mules and Men (1935).[3][1]

In 1932 Hurston created a concert program of Negro music at Rollins College in Florida. [3][1]

In January 1935 she was offered a fellowship from the Rosenwald Foundation to pursue a doctorate degree in anthropology and folklore at Columbia University, but Zora seldom attended classes, and backed out of the program, in favor of her work on other projects. [3][1]

In March 1936 she was awarded a Guggenheim Fellowship to study West Indian Obeah practices, leading to her gathering of folklore in the Caribbean.[3] She spent the summer in Jamaica, and then in Haiti for the winter, where she wrote her best-known work, Their Eyes Were Watching God (1937), in only seven weeks.[1]

In early 1938 she compiled her gathered folklore of the prior year into Tell My Horse, her second book of folklore. [1]

in June 1939 Zora was awarded an honorary Doctor of Letters degree from Morgan State College.[3][1]

On June 27, 1939 she married Albert Price III in Florida, and that summer she began work as a drama instructor at North Carolina College for Negroes in Durham.[1]

In February 1940 Zora filed for divorce from Albert Price, which was followed by a brief reconciliation.[1]

In late 1941 through early 1942 Zora worked as a story consultant for Paramount Pictures Studios, and then published her autobiography, Dust Tracks on a Road (1942). [3] That book, the last one to be published by Lippincott, proved to be the peak of her career, when in February 1943 it won her the Anisfield-Wolf Book Award in Race Relations, and Zora also then appeared on the cover of the Saturday Review. In March she also received Howard University's Distinguished Alumni Award.[1]

In November 1943 Zora's divorce from Albert Price was granted.[1] She married James Howell Pitts in Deland, Florida, in January 1944, but they divorced later that year. [2]

After this, Zora's literary career foundered. In 1945 her book Mrs. Doctor was rejected by Lippincott. [1] She continued to publish short works, but her next few novels were also rejected,[3] and it would be several years before Hurston would again be published with her last novel Seraph on the Suwanee (1948, published by Charles Scribner's Sons). It was written while Zora was in British Honduras to study black communities in Central America.[1]

In September 1948 Zora was arrested, falsely accused of molesting a ten-year-old boy. The case was dismissed in March 1949.[1]

After having lived in New York again through the late 1940s, Zora moved south to Belle Glade, Florida by the winter of 1951, where she drifted into obscurity, working for brief periods as a librarian or a reporter, but most often as a maid. [3] But Zora still continued to publish some short works, and in 1956 she received an award for "education and human relations" from Bethune-Cookman College.[1]

Zora's literary downfall was a result of the severe criticism she had received throughout her career, accused of not writing black fiction in the protest tradition. The most well-known and influential black writer of her day, Richard Wright, had excoriated her popular novel Their Eyes as exploiting those "quaint" aspects of Negro life that satisfied the tastes of a white audience. The end of the 1940s had become dominated by Wright's confrontational brand of social realism in black fiction, leaving little tolerance for the quieter literary voice of a black woman in search of more placid self-realization. [4]

In 1959 Zora suffered a stroke and was forced by poverty to enter the St. Lucie County Welfare Home in Fort Pierce, Florida, where she died of "hypertensive heart disease" on January 28, 1960, penniless. [3][1]

A collection was taken up for her funeral, and she was buried in an unmarked grave in the segregated cemetery Garden of Heavenly Rest in Fort Pierce. [3][1]

In the late 1960s, young black women's studies on campus began a steady revival of Zora's works, which were by then mostly obscure and out of print. By 1971, copies of Their Eyes had become an undergound phenomenon. In the term 1971-1972 Alice Walker was teaching the novel at Wellesley when she discovered in an essay by a folklorist that Zora was buried in an unmarked grave.[4]

In March 1975, Walker documented her search in a personal essay in Ms. magazine, titled "In Search of Zora Neale Hurston."[3][4][5]

That article instantly sparked a major renewed interest in Their Eyes, which by then had again fallen out of print. In March 1977 the book led the Modern Language Association's published list of out of print books that were most in demand at a national level. It was described by the program coordinator as "unanimously at the top of the list."[4]

That year Robert Hemenway published his Zora Neale Hurston: A Literary Biography, which became a runaway bestseller at the MLA convention in December. Alice Walker had written the foreword. [3][4]

In March 1978 Their Eyes was resurrected in steady print for the next decade in a new edition by the University of Illinois Press.[4]

Alice Walker followed that and continued her championing of Zora's works in I Love Myself When I Am Laughing... And Then Again When I am Looking Mean and Impressive: A Zora Neale Hurston Reader, which Walker edited, as published by the Feminist Press in 1979.[4]

More biographies and collections and new editions and scholarship of Zora have since followed, keeping Zora's works in print, and her scholastic reputation under continuous higher study.

Is Zora your ancestor? Please don't go away!

ask our community of genealogists a question.
Sponsored Search by Ancestry.com
DNA
No known carriers of Zora's ancestors' DNA have taken a DNA test. 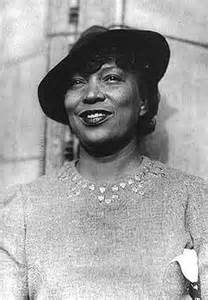 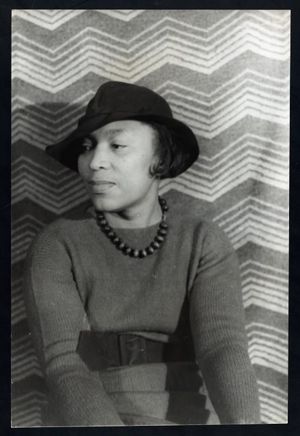