John Hussey MP was a member of aristocracy in the British Isles.

Hussey was knighted at the Battle of Blackheath in 1497. Six years later, he was "Knight of the Body" to Henry VII, followed by an appointment as "Master of Lyfield Forest", Rutland in 1505 and Comptroller of the Household in 1509. He was promoted to Knight banneret on 16 August 1513 at the battle of the Spurs.

In 1521 he was made chief butler of England. In 1529 he was summoned by writ to the House of Lords as 'Johannes Hussey de sleford, chivaler'.

He was a signatory to the document sent from England begging the papal sanction to Henry VIII's divorce from Catherine of Aragon, and was one of those at the queen's trial who gave evidence as to her previous marriage with Prince Arthur. He was appointed in 1533 as chamberlain to the illegitimized "Princess" Mary, and his allegiance to her father seems about the same time to have begun to waver.

Hussey and his cousin were implicated in the Pilgrimage of Grace of 1536. Though Hussey denied participation, he was accused of conspiring to change laws and depose Henry VIII, and abetting those who made war on the king in October 1536.

The charges may have been levied in part because of Hussey's Catholic sympathies, and because Hussey and his wife, having served 'Princess' Mary, were partisans on her behalf.

After being indicted and tried for treason, Hussey was found guilty by the House of Lords and beheaded at Lincoln in 1536.

The order of wives is disputed in various sources.[1]

Hussey married Margaret Blount supposedly in 1490 at Mangotsfield.[1] They had three sons: 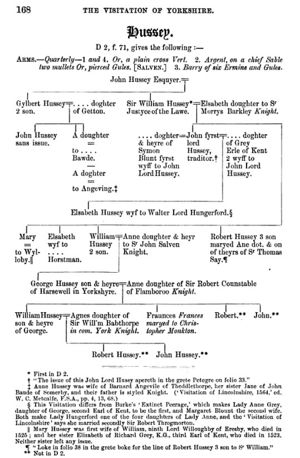