Anne was the eldest daughter of Edward Hyde and his second wife Frances Aylesbury. She was born in 1637 at Cranbourne Lodge in Windsor and named for Edward's first wife, Anne Ayliffe.[1]

Hyde was a royalist, one of the principal advisors of King Charles I during the Civil War and frequently opposed to the less prudent advice of his queen Henrietta Maria, who became a lasting enemy. Named to the council of the Prince of Wales, later Charles II, he continued to advise him during his exile after the war and became his chancellor.[2]

In 1654, Hyde's daughter Anne was given a place in the household of Mary Princess of Orange at Breda in the Netherlands, where Anne later began a liaison with Mary's brother James. Prudently, on 24 November 1659, Anne obtained from him a written promise of marriage and early the next year, when Charles was restored to the English throne, she was pregnant.[3] [4]

As Anne was the daughter of a commoner, the accepted outcome in such situations was that she would be accepted as James' mistress. Anne, however, appears to have held out for marriage: ". . . her ladyship had the spirit to declare, that it should be known she was his wife, be the consequences what they might." [5] She had the promise in writing, even though James managed to retrieve the paper.[6] The idea outraged the royalists, most notably James' mother. Hyde himself, desperate to retain the royal favor, advised Charles to send her to the Tower and perhaps have her decapitated.[2] Servants of James helpfully swore that they had slept with Anne.[7] But Charles, who grew to like Anne and called her "a woman of great wit and excellent parts", finally allowed the marriage, which was secretly solemnized on 3 September 1660.[4] Charles appeared to think that at least one person in James' family ought to have some wits.

The child, named Charles, was born 22 October and given the title Duke of Cambridge, but he died of smallpox 5 May the next year. Samuel Pepys wrote: "I hear to-night that the Duke of York’s son is this day dead, which I believe will please every body; and I hear that the Duke and his Lady themselves are not much troubled at it."[8] Subsequent children would not be tainted by rumors of illegitimacy. While there were subsequent children, only two daughters, Mary and Anne, survived to adulthood.

The marriage of James and Anne was not a happy one, due mainly to James' relentless philandering. He not only had acknowledged children with two mistresses - Arabella Churchill and Catherine Sedley - he engaged in random assignations.[9] Anne was falsely accused of poisoning one acknowleged mistress, Lady Denham.[10]

Anne was not popular at court, which was due in large part to her father, who had been given the title Earl of Clarendon and was widely condemned for his pride and profligacy.[11] After the naval disaster of 1667 in the Dutch War, Clarendon was unfairly held responsible by courtiers jealous of his power and sent into exile; Anne never saw her father again.[12]

At some point during the decade, both Anne and James converted secretly to the Catholic church, from which James later incurred great liabilities that led to the loss of his throne.[13] When in February 1671 Anne bore her last child, Catherine, she was already fatally ill with breast cancer. She died on 31 March 1671 after rejecting the last rites of the Anglican church and reportedly receiving the Catholic rites. She was buried in Westminster Abbey, in the vault of Mary, Queen of Scots.[4] 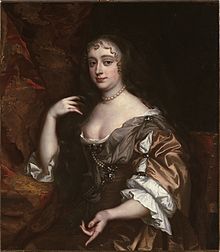