Carolina “La Belle” Otero, (née Agustina Otero Iglesias), sometimes simply called Otero, was a Galician dancer and singer, actress, and courtesan who came to fame while working in the Folies Bèrgere in Paris, France. She was, by some accounts, the greatest of "Les Grandes Trois," the three most sought after courtesans in La Belle Époque France.

Note
La Belle Époque is the French term that refers to the years from approximately 1875 to 1914. Called Época dorada in Spain, this time period corresponds to the The Gilded Age in the United States and the Late Victorian and the Edwardian periods in Great Britain.

Agustina Otero Iglesias was born November 4, 1868 in Valga, Pontevedra, Galicia, a small town just north of Spain. Her family was poor, and when she was just a child, she moved to Galicia's capital, Santiago de Campostela, where she worked as a maid. When she was 10-years-old, she was raped, an attack that left her sterile. [1][2]

In the early 1880s, when she was 14, Agustina ran away to Lisbon with her boyfriend Paco. There, she made her living as a singer and dancer, with Paco as her dancing partner. Wikipedia cites a 1965 Time magazine article, stating that while she was still 14, she "reportedly married an Italian nobleman, Count Guglielmo."

Presumably, her marriage to Count Guglielmo ended in divorce or annulment, for she next married "René Webb, an English cotton spinner"[3] in November 1906.[4] Her entry in Who's Who on the Stage: 1908 reports a considerably embellished biography full of danger and intrigue that is well worth reading.

By the time she was 18 or 19, she was singing in cafes[5], and in 1888, when she was 20, she found a sponsor and moved to France to pursue her dancing career, calling herself "La Belle Otero" (The Beautiful Otero). Shortly thereafter, she had star billing at Les Folies Bèrgere in Paris and soon became one of the most famous women in France[6][7]

Much has been written about how she was much sought after by the rich and famous, including nobility from across Europe, with duels fought over her, and rumors claiming that as many as six men committed suicide after she ended affairs with them. (Noted in just about every source I've found that mentions her. Lloyd-391 02:21, 5 November 2014 (EST))

She is one of the earliest film stars, having been recorded in a one-minute 1898 piece in which she dances "Valse Brillante," which is still available on YouTube (see https://www.youtube.com/watch?v=gnBJJkuc5I8).[8] Additionally, the 1954 film La Belle Otero[9] seems likely to have been a biographical piece, although it may have been fictionalized. (IMDB provides no plot or synopsis, so this is totally guess work on my part. Lloyd-391 02:21, 5 November 2014 (EST))

Otero retired from the stage in 1918 or 1922, depending upon the source consulted, at or shortly after the age of 50. Interviews from the later part of her life suggest that while she chose her quiet retirement, she was never able to let go of longing for the excitement and notoriety she had found during her earlier life. Wikipedia cites her as having said, "Women have one mission in life: to be beautiful. When one gets old, one must learn how to break mirrors. I am very gently expecting to die."

I, along with my husband, run an online shop selling vintage postcards, called Red Poulaine. In the course of our business, we handle images of many famous individuals from the mid- to late-1800s and early 1900s. We also have a blog, in which we sometimes share biographical sketches of the postcard subjects and their photographers, as well as other related topics. The image I have attached to this profile is one we were posting in our shop yesterday, at which time we realized that we were posting the image on the subject's birthday. I have used our blog post about Otero as a source here because it was convenient to do so, since we had done a fair amount of research for that post, and not out of a desire to advertise our shop. Unfortunately, since Carolina Otero spent most of her life in Europe and I have trouble accessing non-US genealogical documents, this profile is still lacking in the types of sources most preferable for genealogical purposes. Lloyd-391 03:10, 5 November 2014 (EST)

Is Carolina your ancestor? Please don't go away!

ask our community of genealogists a question.
Sponsored Search by Ancestry.com
DNA
No known carriers of Carolina's ancestors' DNA have taken a DNA test. 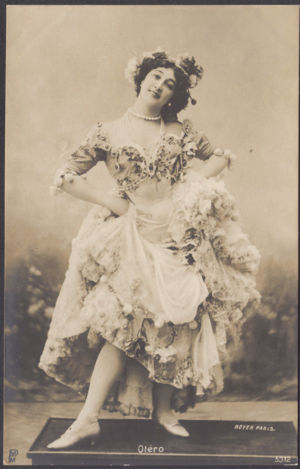 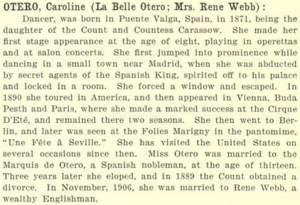