Mary Amelia Ingalls was born January 10, 1865, in Pepin Township (Pepin County) Wisconsin, the first child of Charles Ingalls and Caroline Quiner. She had younger sisters Laura (born 1867), Carrie (born 1870), and Grace (born 1877). A brother, Charles Frederick, was born in 1875 and died at nine months of age.

Although Laura Ingalls Wilder wrote about the differences in sisters Mary and Laura Ingalls in the "Little House"® books, the sisters were actually extremely close and shared many of the same interests: love of reading, writing poetry, and needlework, to name a few. The sisters became even closer when Mary lost her sight.
In May 1879, Mary Ingalls was reported as being quite ill, but slowly recovering. It is not known what caused Mary's blindness that summer of 1879, but at various times Wilder wrote that it was caused by measles, brain fever, spinal meningitis, scarlet fever, and/or high fever and strokes. Laura became Mary's "eyes" and the two studied together so that Mary could continue to learn what she could no longer read.
Although there was no school for the blind in Dakota Territory when the Ingallses settled there, the Territory supported its blind residents at the Iowa College for the Blind in Vinton, Iowa, paying for tuition, room and board, and books. In October 1881, the following was recorded in Kingsbury County:
A statement received from [the] County Superintendent certifying that Mary A. Ingalls is entitled to the benefits of the Territorial Blind Asylum and the same was forwarded to the Governor with the certificate of the Commissioner attesting to the truth of the recitals therein.
Mary Ingalls was enrolled at the Iowa College for the Blind on November 23, 1881. She began a seven-year course of study that included spelling, arithmetic, grammar, history, geography, physiology, natural and mental philosophy, algebra, rhetoric, chemistry, zoology, raised print, Braille, literature, civil government, political economics, plane and solid geometry, and botany. Also offered were music courses in vocal, harmony, piano, organ, violin, guitar, flute, clarinet, and cornet. Industrial courses included the making of brooms, mattresses, hammocks, fly nets, cane seats, carpets (woven); also sewing, knitting, and bead work. Regular attendance at chapel was required.
The 1885 Iowa census recorded 71 males and 72 females at the College for the Blind, including Mary Ingalls, age 19. Female students ranged in age from 7 to 28 years. Although Laura Ingalls Wilder wrote that Mary's roommate was named Blanche, there is no student by that name on the 1885 census. In 1880, prior to Mary entering the school, the census included student Blanche M. Howard, from Iowa. One of Mary's friends was Annie Swann; Mary wrote a poem in her honor (see The Little House Reader, edited by William Anderson).
Mary graduated from college on June 12, 1889, although she was most likely not in school during the 1887-1888 year. Following graduation, Mary returned to De Smet, living at home and keeping busy with her music and books. She never married. Mary was active in church and social organizations and supplemented the family income by making fly nets for horses, which she sold. Following her father's death, her mother was her constant companion, and Ma's death in April 1924 was especially hard on Mary. In 1912, Ma had sold the Third Street house to Mary; the payment was $1 plus "love and affection." For a while, Grace and Nate Dow moved into the family home with Mary.
Mary's sister Carrie (now Mrs. David Swanzey) often made extended visits to De Smet. In June 1927, Mary accompanied Carrie to her home in Keystone, South Dakota, for a visit. The De Smet Leader reported that "the change should be a great treat to Miss Ingalls, with her sister and family to act as eyes for her, and she looked forward to the trip and visit with great anticipation." Mary was still with Carrie in January 1928 when she had to be hospitalized following a fall and stroke. By August of that year, Mary was still with Carrie, and Grace and Nate Dow had rented the Ingalls home and moved back to their farm south of Manchester.
Mary Ingalls died October 17, 1928, in Keystone (Pennington County) South Dakota. Shortly before her death, Carrie wrote to Laura in Mansfield:
Keystone, S.D. Saturday morning- Dear Laura, Laura I am so sorry to write this and yet of course we were expecting it. Mary had another stroke Saturday and then it seemed as thought she would rally but this morning is hardly able to move. She has lost her speech and Laura I doubt if she rallies. The trained nurse was up from Rapid City on a baby case and came to see her. She said nothing could be done and the doctor came and said so too. It's hard but Laura I hope, just hope, she goes in comfort. She is not suffering just sleeping real quiet. And she may rally out, it would be only to have it over again. I will telegraph you if it courses. She was speaking of you that morning. In haste, love Carrie.
Mary's obituary in the October 19, 1928 De Smet Leader read:
Mary Ingalls passed away at the home of her sister, Mrs. D.N. Swanzey, at Keystone, is learned by wire Wednesday. The body arrived in De Smet Thursday morning with Mrs. Swanzey accompanying it. Miss Ingalls suffered another stroke a few days before her death, after a year of ill health following former strokes. Funeral services will be held at the Congregational church Friday at two o'clock, with the Rev. J.T. O'Neill officiating.
Mary Ingalls was buried in the De Smet cemetery.
Type: Web Site
Text: Pioneer Girl: Fact and Fiction of Laura Ingalls Wilder, website created by Nancy Cleaveland, http://www.pioneergirl.com/index.htm.

ask our community of genealogists a question.
Sponsored Search by Ancestry.com
DNA Connections
It may be possible to confirm family relationships with Mary by comparing test results with other carriers of her ancestors' mitochondrial DNA. However, there are no known mtDNA test-takers in her direct maternal line. It is likely that these autosomal DNA test-takers will share some percentage of DNA with Mary: 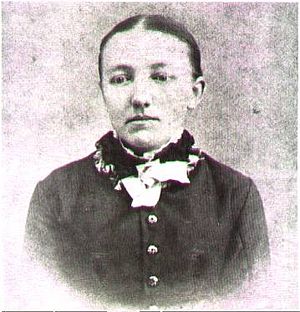 Leave a message for others who see this profile.
There are no comments yet.
Login to post a comment.
M. (Stewart) H.
This profile has been identified as a duplicate by an Arborist. Please review the proposed merge to Ingalls-3. If they are duplicates please approve the merge. If you have questions or would like assistance please ask me or any other Arborist. Thank you. M Hammond
posted Sep 22, 2013 by M. (Stewart) H.