In 1629 the family decided to emigrate to the New World. In a letter written for the Massachusetts Bay Company by Matthew Craddock in London to Capt. John Endicott, Esq., Governor at Naumkeag (Salem) dated 28 May 1629 and finished at Gravesend 3 June 1629, Craddock names as emigrants: "one Richard Haward and Richard Indersall, both Bedfordshire men, hyred for the Company, with their famylies, who wee pray you may be well accomodated, not doubting but they will well & orderly demean themselves".(4)[4] Richard and his family arrived in Salem on 29 June 1629 with Rev. Francis Higginson.

Richard Ingersoll (sometimes written Ingerson or Inkersall) and his wife, Ann, (recorded as "Anne" on the ship's passenger list) came from Sandy, Bedfordshire, England, to America with their four children, George, Joanna, John, Sarah, and with the daughter of his first marriage, Alice. They sailed on the ship Mayflower, William Pierce, Master, with 35 passengers mostly from Leyden, Holland, leaving Gravesend, England, in March 1629 and arriving in Plymouth, MA, on 15 May 1629. Richard came to the Colonies well recommended having been sent there, with his family, under contract with the Massachusetts Bay Co. to take his place in the group of planters (a term used to designate founders of the colonies).

Richard received a town grant of two acres on 6 Apr. 1635 and was reminded to allow room for a highway on his land.[5] Although, he undoubtedly had received a grant earlier than that. In 1636 he had another of 80 acres "on Cape Ann side".[6] Anne Ingersoll is on the list of those admitted to the Salem church before the end of 1636 with the notation "removed"[7] In the 1636 land grant Richard appears in that portion of the list which included "non-freemen" meaning that he was not a member of the church. He and Pasco Foote on 10 Apr. 1637 were to have "such pportions as is nominated for them: by the frost fish brook next to Goodman Barneys."[8] The land grant next to Jacob Barney was a problem. Richard sued Barney at the Sept. term 1639 regarding the land.[9] Barney sued him back over feeding cattle in his marsh in the Sept. term 1640 and won a verdict of "two loads of hay at water side as convenient as his own was".[10] Joshua Verrin sued Ingersoll at the same term over maintenance of a fence and was countersued immediately.[11] Desiring to have some meadow in 1639 he was granted 10 acres in the great meadow on November 20, and 20 acres on December 23.[12] In an undated list, possibly of 1637, in the handwriting of Roger Conant, it is stated that Ingersoll,'s family consisted of 9 persons and he was granted one acre.[13] On January 16, 1636/7, Ingersoll was named to maintain a ferry across the North river during the town's pleasure, charging one penny for every passenger. About 1639 or 1640 Ingersoll rented from Mr. Henry Chickering the Townsend Bishop farm at Salem Village and worked it in partnership with his sons George and John. This farm, later occupied by Francis Nurse, was the center of bitter controversy. The town passed an order on July 7, 1644, “that two be appointed every Lords day to walk forth in the time of God's worship, to take notice of such as either lie about the meeting house without attending to the word or ordinances, or that lie at home or in the fields without giving good account thereof and to present them to the magistrate, whereby they may be proceeded against". Robert Molton, Jr., and Richard Ingersoll were the sixth such pair appointed. [14]

Richard Ingersoll found the Salem miller lacking and in September 1640 took grandjuryman Lawrence Leech with him to the mill to prove that the grists were "much short of weight".[15] His neighbors found his cattle and the cattle of a dozen other men offensive in the common cornfields and Ingersoll paid the court's fine. [16]

He emigrated in 1629, settling in Salem. He was ferryman on the North River.

21 July 1644: I, Richard Ingersoll of Salem in the County of Essex in New England being weake in body, but through God's mercy in perfect memory doe make this my last will and testament as followeth, viz.:

I give to Ann my wife all my estate of land, goods, & chattells whatsoever except as followeth, viz.:

I give to George Ingersoll my son six acres lying in the great meadow.

Item I give to Nathaniel Ingersoll my youngest son a parcell of ground, which I bought of John P[???], but if the said Nathaniel dy without issue of his body lawfully begotten, then the land aforesaid to be equally shared between John Ingersoll my son, & Richard Pettingill & William Haines my sons in law.

I give to Bathsheba my youngest daughter two cowes.

I give to my daughter Alice Walcott my house at town with 10 acres of upland and meadow after my wife's decease.

I read this will to Richard Ingersoll & he acknowledged it to be his will. Jo, Endicott.

NOTE: Anderson (GMB, p 1060) cites NEHGR 9:157 for the published copy of this will and notes: "What appears to be a different version of his will refers to both Bathsheba and Alice as youngest daughter, which is clearly impossible. [EPR 1:43; EQC 1:76[. Without examining the originals of these documents we cannot tell whether the error was made by seventeenth-century or the nineteenth-century copyist."

The "parcell of ground with a little frame thereupon, which I bought of John Pease ... " given to Nathaniel who lived to be over eighty years old and gave this lot to the church. Ninety years after the date of Richard's will the title to this land was cleared and the names of a number of his great-grandchildren appear in the Essex county land records. The Meeting House of the Village and a tavern belonging to his son, Nathaniel, were built on this property.

For some of the larger and more expensive farm implements noted in the inventory, it's stated that he owned one third of each item. This would indicate that he shared ownership with one or two other husbandmen in the neighborhood, or, as seems more likely, with two of his sons. In depositions at the June 1678 Essex Quarterly Court, the brothers George, John and Nathaniel "Ingerson" gave evidence regarding events in the 1640s. George deposed that "living apartner with his father Richard Ingerson upon the farm that the said Rich(ar)d Ingerson hired of Mr. Chickering which the said Chickering had bought of Mr. Townsend Bishop," demonstrating that the Ingersolls were in a cooperative family enterprise and placing them on Mr. Chickering's farm.

"This Indenture made the fourth day of the eight month Ano 1648, Between Henry Chickering of Dedham... And John Endicott of Salem... the said Henry Chickering for and in consideration of the sume of one hundred and sixteen pounds... doth... sell... All that farme containing three hundred acres of Land.. which formerly did belong unto Townsend Bishop of Salem... since in the hand & possession of Henry Chickering and after him in the... occupation of Richard Ingersol deceased, and in the Right of his widdow in the Law, ( ) & occupation of John knight of newbury, together with the mansion house thereupon built by the said Townsend Bishop..."[18]

Several years after the widow, Ann, married John Knight, Sr. of Newbury litigation arose over the farm her husband had willed her and in the trial her son in law gave the following testimony: "I Richard Pettingell, aged about 45 years doe testify that this farm of land that is now in contriversy was reserved by the widow Inkersoll to her self before her marriage to John Knight, Sr. and she verbally gave this land to John Inkersoll, her son. I, Richard Pettingell doe farder testify that about the year 52 the said John Knight came home too Newbury and tould his wife that hee had promised Mr. Pain sum timber at frost fish river; she was then troubled at it and said what have you to doe to sell my timber wher upon the said John Knight promised her twenty shillings, and the said John Knight, Sr. did then own that he had no right in that land"[19]

On 10 Apr. 1668 Anne Knight deeded eighty acres at Royalside bequeathed to her by her late husband "Richard Ingerson" to their sons John and Nathaniel Ingerson with the consent of her now husband John Knight Sr. of Newbury. [20]

Among Richard Ingersoll's papers was found this recipe: "A metson to make a man's hear groe when he is bald: Take some fier flies and some Redd worms and sum black snayles and sum hune bees and drie them and ppund them to powder and mixt them in milk or water".

It is claimed that a certain house in Salem was built by Richard Ingersoll and was the original of the romance by Hawthorne-"House of the Seven Gables". 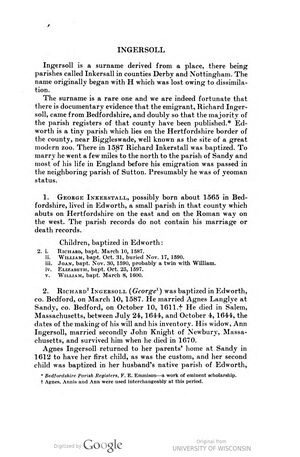 Sarah Grimaldi
I know the Ancestry of Abel Lunt is listed in the see also section, but I just wanted to share a permanent open source link to the text, hosted on Hathitrust.org,

Cheryl (Aldrich) Skordahl
I added the link, Sarah. Thanks.

You sure can feel free to do that yourself, to any profile.