Major Thomas Ingersoll was a Loyalist in the American Revolution

He was born in Westfield, Massachusetts, later moving to Great Barrington where, aside from his trade as a hatter, he also served as constable and tax collector. In 1775, he married Elizabeth Dewey. He served as a lieutenant in the American militia from 1777 to 1781 and continued to serve in the Great Barrington militia after the American Revolution, reaching the rank of major.

Ingersoll immigrated to Upper Canada after hearing about the availability of land there for new settlers. In 1793, he obtained a land grant of 66,000 acres (267 km²) in Oxford County from Governor John Graves Simcoe. He named the new settlement Oxford-on-the-Thames. Ingersoll was named a justice of the peace for the county.

By November, 1795, Ingersoll had once again uprooted, moving to Queenston, Upper Canada and operating one of the earliest taverns before putting it up for sale in 1801.

Thomas Ingersoll emigrated to Upper Canada from the United States in 1795. He operated a tavern in Queenston before settling on his land grant in Oxford County.

In 1806, he left the settlement at Oxford-on-the-Thames and settled on the Credit River near Port Credit, operating "Government House" until his death in 1812.

His farm is the site of today's town of Ingersoll, His son Charles renamed Oxford-on-the-Thames "Ingersoll" in his honor. 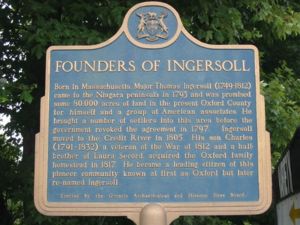 Leave a message for others who see this profile.
There are no comments yet.
Login to post a comment.
Lesli Huffman
Thomas Ingersoll was married three times. His first wife, Elizabeth Dewey, had four children: Laura (who was to become famous), Elizabeth, Myra, Abigail. His second wife, Mercy Smith had no children. His third wife, Sarah Whiting, had seven children: Charles, Charlotte, Appy, Thomas, Samuel, James, and then Sarah who was born after they left Oxford.