Silas Jackson was born on 15 June 1781[1] in Rockaway, Morris County, New Jersey, [2] [3]the fourth of ten known children and the second of five sons of Daniel and Jemima Benjamin Jackson. [2][3]

About 1786, when Silas was a small child, his father, Daniel, moved from Morris County, New Jersey, so Silas, although born in New Jersey, apparently grew up in Northumberland County, Pennsylvania.

In 1802, when he was about twenty, he married Jane McHenry,[1] daughter of Daniel McHenry and Mary Stevens.

She bore him three known children, one son and two daughters, including:

On 28 August 1809, when he was twenty-eight, he married Mary Peterman in Pennsylvania..

:: She bore him twelve children, four sons and eight daughters, including a daughter whom they named Jamima.

(the image of this record at ancestry.com was too faint to read; so I've had to use their index record which does not include the birth place.).

Witness present And we hereunto subscribe our names as witnesses to the above will Alinas Cole (seal) Silas D. Cole (seal) Columbia County

This sixteenth day of February AD One thousand eight hundred and sixty five before me John G. Freeze Register for the Probate of wills and grant letter of administration in and for the County aforesaid personally came Alinas Cole and Silas D. Cole the subscribing witnesses to the written and aforegoing instrument of writing purported to be the last will and testament of Silas Jackson late of said County decease together with the codicil there to annexed who being only sworn according to law do say that they were present and saw and heard Silas Jackson the Testator sign seal and publish pronounce and declare the foregoing instrument of writing as read for his last will and testament together with the codicil thereto annexed and _____ at the time of ____ he was of sound mind memory and understanding to the best of their knowledge and belief Alinas Cole-Silas D. Cole Sworn and subscribed before me John G. Freeze Reg.- per P.H. Freeze Deputy:

Columbia County Be it recorded that on the third day of May AD one thousand and eight hundred and sixty five before me John G. Freeze Register for the Probate of Wills do in and for said letters testamentry in due and common form of law on the estate of Silas Jackson late of Columbia County decease. were granted unto David Lewis the Executor in said will named. The said Executor having been first duly sworn to administer said Estate Well and truly and according to law and pursuant to the provisions of the said will and to faithfully comply unto and regard this laws relative collatered inheritances.

These transcribers imagine that Silas dictated this will and then attempted to sign it himself but even his signature has a problem. He was 82 years old when he signed the will. Much discussion and research has been attempted to try to determine relationships to all the folks mentioned. All are known except Marietta Willits and Jane KolleyColley. On the 1860 census (see above) Silas was living with the family of Samuel and Myrtilla/Myrilla Patterson. So far no family relationship between Silas and either Samuel or Myrtilla has been found. The handwriting and spelling is bad and perhaps that 'Marietta' was supposed to be Marilla or Myrtilla???.

Alinas Cole and Silas D. Cole who witnessed the will are grandsons of Silas, the sons of his daughter Sarah Jackson and Ezekiel Cole Jr.

Is Silas your ancestor? Please don't go away!

ask our community of genealogists a question.
Sponsored Search by Ancestry.com
DNA Connections
It may be possible to confirm family relationships with Silas by comparing test results with other carriers of his Y-chromosome or his mother's mitochondrial DNA. Y-chromosome DNA test-takers in his direct paternal line on WikiTree: It is likely that these autosomal DNA test-takers will share some percentage of DNA with Silas: 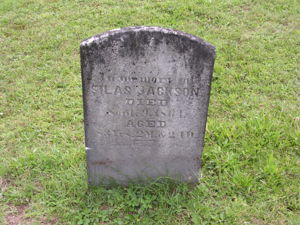 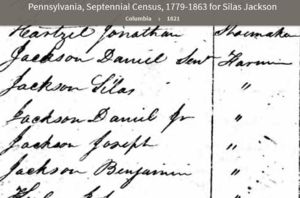