According to the Landed Estate Court Rentals Richard Bagnall had an interest in a lease over 27 Peter Street Dublin with Anna Maria Domville and a Thomas Jackson was at 24 Peters Street Dublin, they were both described as part of Lot 40. The lease date for Richard's lease was 6th December, 1796 (the date of the marriage of Richard Bagnall and his wife Ann Moore) for 99 years. The lease for Thomas Jackson's property was from 13 August 1714 with William Domville. It looks as if by 1862 there was a hospital in this location between nos. 24 and 27.

Was it the death of his father Thomas Jackson snr of Southwark, Surrey, England b Abt 1762 when Probate was granted 16 Dec 1824.[1] This individual was described as a Coal Merchant and had a son named Thomas Jackson mentioned in this will. Quite possible? This will mentions his wife Elizabeth Jackson, and brothers James and Joseph Jackson. It also mentions a daughter Elizabeth Jackson. Further on it mentions four sons, Thomas (middle name Barboton? There is a Barbarton listed in Somerset in 1610 Or could it actually be Brabazon? A transcription error? If so, this shows a connection to the Marquess of Drogeda (recent generations suggested a connection to the Marquee of Drogeda) as it is well documented that a Brabazon married a Moore.[2] ) John, Edward and James Jackson. This will appears to be written in 1824.

1803 - Thomas Jackson Coal Merchant challenged by the prisoner. John Jackson Coal Merchant challenged by the prisoner. This entry for John Jackson could possibly be this Thomas's brother. If using an estimation of Thomas Jackson, husband of Anna Maria with a year of birth as 1800 this entry would be for his father, although there is nothing to show that he wasn't considerably older than Anna Maria Bagnall. If it is his father this would mean they were both Coal Merchants.

1820 - Thomas Jackson was residing at 33 Mabbott Street Dublin and the directory describes him as a Corn Factor. (Coal Factor?) [3]

1823 - A deed was drawn up for the marriage of his sister in law Jane to Henry Bradshaw. In it he was described as of Mabbott Street, Dublin, and a Coal Factor. [4]

This confirms the relationship of Richard Bagnall to his daughter Jane Bagnall. It describes him as deceased. It also connects his interest in Peter Street above and an interest in Clattertown which he had obviously inherited from his father (see details of his father's will) and a share had been passed to his daughters. Other parties to the deed were Charles Moore of Jervis Street possibly an uncle of Jane's on her mother's side. Jane was residing at North Cumberland Street and her spouse to be Henry Bradshaw was residing at Aungier Street, Dublin.[5]

1830 - Thomas Jackson, Coal Factor, residing at 3 Gt Brunswick Street, Dublin. [6] This is also the address that their daughter Anna Maria Jackson was born in 1829.

1845 - It seems most likely the family remained residing at 3 Gt Brunswick Street, Dublin at the time of the marriage of Thomas Jackson and Anna Maria's daughter Eliza to John Milliken.

1853 -1862 - Thomas Jackson Coal and Coke Merchant was listed in Dublin at 45 Jervis Street.[10] It is interesting that Charles Moore in the deed for Jane Jackson daughter of Thomas was listed as of Jervis Street in 1823.

Research speculation on the Ancestors of this Thomas Jackson

Thomas Jackson 1st - born about 1694. Entered into the Lease in 1714 with William Domville. He would have had to be an adult in 1714 when he was a party to the lease. The lease was to hold for ever.

Thomas Jackson 2nd - most likely born after 1714 date of lease, say 1720? at the time of the lease. I am only guessing he was named Thomas after family naming convention.

Richard Bagnall entered into the lease in 1796 for 99 years in the same year as his marriage to Ann Moore He died in 1801.

Thomas Jackson 5th of Mabbott street - Born say 1800? married Anna Maria Bagnall in 1823. Anna Maria's sister Jane married in 1823 and the deed is written at this time, it confirms Richard Bagnall was deceased already. Estimation of Thomas Jackson's death after 1862 as he appeared in various directories from 1853 to 1862 with address as 45 Jervis street. Have searched 45 Jervis Street in Newspaper archive. Charles Moore was in Jervis Street in 1823 when the deed was written. It looked like it might be a Solicitors office perhaps where any enquiries were sent. Was it this Thomas Jackson who was an English Bankrupt in 1841? I wonder why he wasn't listed in the directories from 1841 to 1853 or are some listings not yet found. By 1862 the Peters St properties seem to be a hospital. The deed of Jane Jackson's marriage in 1823 confirms that this is the same Peters Street mentioned under Thomas Jackson 1st and that therefore he is an ancestor.

I need to prove the identity of my Great Great Grandfather - I strongly suspect his name was William Jackson and he was born about 1760 and died - was killed - in 1798 - in County Wicklow. Prove that and everything fits into place. Statement from Graham B. Jackson in an email December 7 2020.

I could not get back any further on the Jackson family. than the marriage of 1823...I could not find any references - the reference I finally found was a letter written by some one about to be executed - that letter was held in the Jackson family in Ireland - it was never made public until about 10 years ago when I published it in one of the journals in the hope some one would come up with a helpful comment - no one did.. I had been reading of the Up Rising of 1798 in County Wicklow - there was a reference to a Jackson family in County Wicklow that had long been in my mind as possible Jackson family forebears. I had copies of Jackson Family records that had been brought to Australia by my Grt Grandfather in about 1873 . Amongst these papers was a hand written letter by a man who was aware he was about to be executed. The letter was to his son William - no date - no name of the writer - just his son's name. Right at the bottom of the page the father makesa brief reference to an infant son ' Tommy'. Could this infant be the Thomas who ultimately married Anna Maria Bagnall in 1823 ? A quick calculation showed that " Tommy" could well be the Thomas who married Anna Maria Bagnall. From there on bits of the jig-saw started to fall into place. The elder son in the letter was named William, so family tradition would suggest his father was also named William. It became a family practice to name sons William and Thomas and in each generation the elder son was named after his father. The Jackson family of County Wicklow had a William - and a Thomas. This set me to experimenting by joining bits of the jig saw together. I was able to significantly extend my knowledge of the Jackson family. back well beyond 1823. The result is a family picture that has become much more detailed without conflicting with any known references - it has led to more detail on our Jackson family, both before and after the marriage of 1823.. The present reference is now as far back as the death of the William Jackson, shown on P 58 of A Family Tapestry,. when he, and probably his brother James, were executed by Irish rebels in County Wicklow.in 1798. . The son Thomas on Page 58 of The Family Tapestry is the Thomas Jackson who became a merchant in Dublin and later acted to support the Jackson survivor(s) of the Up - Rising of 1798, including Jane Jackson Plowman who died in 1828 in Dublin. It relies on my ability to draw a detailed picture of the Jackson family, using all the available details, without a single conflicting item - right down to the Jackson family of the 1823 marriage naming a daughter 'Jane' several years after the death of Jane Jackson Plowman, who was an aunt to young Thomas Jackson. If you include the Samuel Jackson who was a Red Coat who went to America in the War of Independence, was captured and stayed in America after the war was over, this accounts for all the children of James Jackson as shown on P 58.of The Family Tapestry. and takes my Jackson family story back to 1714 in Ireland..

ask our community of genealogists a question.
Sponsored Search by Ancestry.com
DNA Connections
It may be possible to confirm family relationships with Thomas by comparing test results with other carriers of his Y-chromosome or his mother's mitochondrial DNA. Y-chromosome DNA test-takers in his direct paternal line on WikiTree: It is likely that these autosomal DNA test-takers will share some percentage of DNA with Thomas: 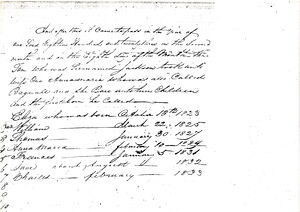