Susanna Winslow formerly Jackson aka White
Born about 1594 in England

The origins and parents of Mayflower passenger Susanna (Jackson) (White) Winslow have recently been discovered and published. All sources and speculation prior to this article published in The American Genealogist should be considered incorrect.[1] [2]

Note: past theories have included the theory that she was Anna (Ann or En) Fuller, sister of Samuel Fuller who was married to a William White in Leiden. This has been proven to be incorrect. Do not merge or mix up these families.

The evidence for Richard Jackson being her father is circumstantial, but taken as a whole is very compelling.[1][3]

Susanna Jackson, was born about 1594, based on her estimated marriage about 1614. Her father Richard Jackson taught school in Tickhill, Yorkshire in 1590. He and Mary Pettinger were married in Doncaster, Yorkshire in 1591. Richard and Anne were in Scrooby, Nottinghamshire, England by 1598 and their children were possibly born there.[1]

Susanna married first William White about 1614 (estimate based on birth of first child).

William and Susanna White traveled on the Mayflower with their son Resolved. Their second son, Peregrine, the first child born to the Pilgrims in New England, was born while the Mayflower was offshore (before disembarking). William White died the first winter.[4]

Susanna married second Edward Winslow, 12 May 1621, at Plymouth (the first marriage at Plymouth).[5][6] They had 5 children, although only 2 lived to adulthood.

In 1623, when land was allotted to each passenger on the Mayflower, Susanna's acre was received as part of her husband's four acre allotment. The Winslows, Edward, Susanna, Edward, John, and the White children Resolved and Perigrine, were part of the third lot, in the 1627 cattle division, receiving as their share a red cow "wch belongeth to the poore of the Colonye", her calf and some she goats.[7][8]

As the original nucleus colony grew in size, Edward was granted land in Marshfield and the family moved there.

Edward Winslow was " ... one of the most energetic and trusted men in the Colony. He went to England in 1623, 1624, 1635 and 1646, as agent of the Plymouth or Massachusetts colonies; and in 1633 he was chosen governor, to which office he was reelected in 1636 and 1644. He did not return to New England after 1646. In 1655 he was sent by Cromwell as one of three commissioners to superintend the expedition against the Spanish possessions in the West Indies, and died at sea near Hispaniola, on the 8th of May of that year ..." [9] There is no evidence that Susanna White Winslow ever accompanied her husband Edward Winslow on his journeys out of Plymouth Colony.

Susanna (Jackson) (White) Winslow died after 18 Dec 1654, the date of her husband's will, which gave their son Josias the bulk of his estate, but Josias was to allow Winslow's wife "a full third parte thereof for her life"[10] Son Josiah wrote his will 2 July 1675 and did not mention his mother,[11] at which time Susanna was presumed dead.

While many believe that her maiden name was FULLER and that she was daughter of Robert Fuller and Sarah Dunkhorn [13][14], this has been disproven; see:

Sponsored Search by Ancestry.com
DNA
No known carriers of Susanna's DNA have taken a DNA test. 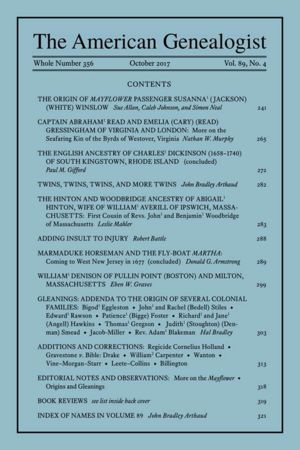 Leave a message for others who see this profile.
There are no comments yet.
Login to post a comment.
Joe Cochoit
No she never married a Tilley.
posted Nov 26, 2019 by Joe Cochoit

Scott Hutchins
Did she ever marry a Tilley?

Randy Seaver
Thank you for updating this profile. Very well done. And thank you to the authors and researchers. It would be interesting to hear how they reasoned this out and drew conclusions.
posted Dec 09, 2018 by Randy Seaver
Joe Cochoit
Yes to both Jillaine. I have started matching the profile to the article, but haven't finished.
posted Mar 15, 2018 by Joe Cochoit

Jillaine Smith
Now that Susannah's origins have been published, can we align this profile to those findings, and also fully detach the William White/Ann Fuller couple from anything Mayflower-related?
posted Mar 15, 2018 by Jillaine Smith
Joe Cochoit
Hi Rod, we are happy to discuss. All of the information you have posted is outdated and has been disproved.

She is Susanna Jackson. Her ancestry is to be published in the next issue of The American Genealogist. We are sort of waiting for the article to be published before completely updating this profile.

posted Nov 11, 2017 by Joe Cochoit
Rod Piper
William White was born 10 Nov 1591 Leiden, Leiden, Zuid-Holland, Netherlands, he is the son of Alexander White and Eleanor Smith. He passed 21 Feb 1620 Leiden, Leiden, Zuid-Holland, Netherlands. He married Susanna Fuller 1 Jul 1612 Leiden, Leiden, Zuid-Holland, Netherlands. He was married by the Reverend John Robertson, who was married to Williams sister Bridget White. This is no coincidence to me. He also had a sister Catherine White she married (2) John Carver Plymouth Colony Governor she also arrived on the Mayflower, the same as her brother William coincidence . I believe I have the right William White and Susanna White/Winslow. Care to discuss?
posted Nov 11, 2017 by Rod Piper
Joe Cochoit
Joyce that information you have is incorrect and out of date.
posted Nov 02, 2017 by Joe Cochoit