Despite ongoing and repeated tradition, and claims by an early genealogy compilation,[10], there is no documentary evidence that Robert was the son of Richard Jackson and Isabella Maltby. The theory may have been based on the fact that Richard Jackson is said to have owned a tract of land at Southold, Long Island, as early as 1640.[11][12]

Richard and Isabella have, therefore, been detached as his parents, and Robert's birth place has been made more general.

Note: Robert had no children named Richard or Isabella.

The earliest record of Robert Jackson in the New World is about 1644 in Hempstead, Long Island, New York. Many secondary sources claim he came to Long Island by way of Massachusetts, then Connecticut:

An 1887 Ledger discussed and transcribed here]) claimed Robert arrived in 1630, and was initially in Massachusetts:
"Robert left England with John Winthrop 1630-31 but which Winthrop is not known. He was said to be of Scotch-Irish ancestry."

This is also claimed in Rockaway Records of Morris County, N.J., p. 101:
:"Tradition has it that Robert Jackson came from Watertown, Mass. to Whethersfield, CT., from thence to Hartford, CT., and from thence to Hempstead in 1643..."

"The settlers of Hempstead are supposed to have come from England with the New Haven Colony under the leadership of Gov. John Winthrop and Sir Richard Saltenstall, and before coming to Long Island in 1644, had previously settled at Watertown, Mass., and Weathersfield and Stamford, Conn. They were accompanied by their minister, Rev. Richard Denton, a graduate of Cambridge, who came with them from England. The name of the settlement is said to be from Hemel Hempstead, in Hertfordshire, whence they originally came."

"Following is a copy of a record written by Chalon Lemuel Jackson: 'Robert Jackson born in Scotland in 1621, came to Boston, drifted south through Connecticut and Rhode Island into Long Island, laid out the City of Hempstead..." (Thus a second reference to being Scottish.)"

But no contemporaneous record of him in New England -- or on any passenger list -- is extant.[13]

Robert was an early settler (before 1664) of Hempstead, southwestern Nassau County, on Dutch-ruled western Long Island.

"Hempstead was first settled around 1644 following the establishment of a treaty between English colonists John Carman and Robert Fordham and the Lenape Indians in 1643. Although the settlers were from the English colony of Connecticut, a patent was issued by the government of New Netherland after the settlers had purchased land from the local natives."[14]

One source indicates that Robert Jackson's 1683 will calls his wife Agnes, daughter of William Washburn.[15] But examination of the actual will gives no indication of her maiden name.

An analysis of Robert's wives was published in 2000, concluding that while Robert was certainly married to a daughter of William Washburn (her name is not known), so it could not have been a daughter named Agnes, who was deceased in 1659, as Robert's wife Agnes was still alive in 1683.

“Sara, daughter of Robert Jackson” was named in the 1657 will of William Washburn, to whom he gave “one yearling heyfer.” Jackson protested the will of his father-in-law, William Washburn, before probate in 1659, because Washburn had named only one of the two daughters of his late wife, in his will.[16]

The article also makes the case for Robert's having married in England before migrating to the colonies. He later married the widow Agnes Puddington, maiden name is unknown.[17]

The order of birth of his children is uncertain, although the four children mentioned in his will are in the following order:

"In 1656, Robert Jackson and others wished to improve their labors, and applied to the Dutch Council for permission to begin plantations toward Carnarsie and Jamaica. They also applied to Governor Stuyvesant for more liberty and for representative government."[18]

"After the Dutch surrender to the English on August 27, 1664, the colony was renamed New York. Governor Nichol called a convention of two delegates from each Long Island town to frame a code of laws to govern the colony. This convention was held at Hempstead February 28, 1665, with Robert Jackson and John Hicks representing Hempstead. The code of laws [Duke's laws] written at this convention remained in force until after the Revolution. Robert's will, dated May 25, 1683 and proved October 13, 1685, is found in Will book A in Queens County, NY."[19]

4 Dec 1666: Robert Jackson and John Jackson were recorded as freeholders of Newtown.[20]

WILL: Will of Robert Jackson (1620 ?-1684) proved October 13, 1685 (Recorded in the first book of Records, Queens County, Long Island, New York) In the Name of God Amen
The twenty-fifth day of May Anno Domini, One Thousand Six Hundred Eighty-Three, I Robert Jackson, of Hemstead [sic] in the North Riding of Yorkshire upon Long Island in the Province of New York, in America, being in perfect mind and memory, thanks be given to Almighty God, and considering with myself the frailty and uncertainty of the mortal life, and that it becometh every man before his departure out of this life, to set in order all his earthly things, so that after his decease no suite, trouble or controversy may ensue for the same. Therefore being well advised that a work I now have in hand, do make and declare this to be my last will and testament, in measure and form following:
First and principally, I commend my soul into the hands of the Almighty God that gave it, and my body to the Earth whereof it was framed, to be decently buried, according to the discretion of my son and heir, John Jackson.
And for my worldly estate which God hath endued me withall, I give, bequeath and dispose as followeth, - I do give and bequeath unto my beloved wife Agnes, six cows two oxen, one horse, and one mare, two three year old cow kind, and four two year olds, and two yearlings. Also, I give unto her all such household goods as are left in the house which she brought with her. Likewise I give and bequeath unto my said wife, two of my lessor sort of brass kettles to add to hers, which are left in the house, which she brought with her. Also I give and bequeath unto her four of my pewter dishes, with four plates and four poringers and my lessor flagon, and one of my pewter tankards, to add to her pewter, that is left in the house, which she brought with her. Also I give and bequeath unto her one of my feather beds with a bolster and pillows, together with a pair of sheets and a pair of blankets, and a rugge, and the curtains that hangs around my bedd to add to her bedding which is left in the house, which she brought with her. Furthermore I give and bequeath unto my said wife five pounds in silver money, and fifty yards of linen cloth, some of one sort, and some of another, such as in the house is. Also to add to her clothing I give her one piece of searge.
Item. I give unto her two swine, also ten bushels of wheat to be paid yearly for the term of five years, provided that she lives unmarried, or unburied so long, but if she be either married or buried, then the said wheat shall cease to be to her, or to any on her account. Also I do allow her to live in my new dwelling house, so long as she lived unmarried or unburied, and that she have half the house lot next to George Hewlet, so long as she remains unmarried or unburied, but if she marry or is buried, then I will that half of the said house lot return to my son John. Also I give and bequeath unto her some wooden vessels, and so I cease giving to her.
Item. I give and bequeath unto my son Samuel Jackson, five mares, and my Cloake and five pounds in silver money and to his wife a hood and scarfe, and to every one of his children a piece of eight (1/2 Joe, Gold $8.00)
Item. I give and bequeath to my daughter Sarah, the wife of Nathaniel Moore, two cows, and every one of her children a piece of eight ($8.00)
Item. I do give and bequeath unto Nathaniel Cole, Junior, the son of my daughter Martha deceased, two cows, and if any one come to inquire for a portion for my daughter Martha deceased, I bequeath unto him five shillings.
Item. I do make, ordain and appoint my son John Jackson, my son and heir, to be my sole Executor and Administrator, of this my last will and testament, and I do hereby give him full power to administer upon all my estate within doors and without, immediately after my decease, lest it be embezzled away. And I do bind and oblige my son John to pay all the legacies which I have herein bequeathed, and what is left after the said legacies are paid and discharged of my proper estate at my decease, I give and bequeath wholly to my son John Jackson and his children.
In witness whereof I the said Robert Jackson have hereunto putt my hand and seale the day and year above written.
(His signature) Robert Jackson
Signed and sealed in presence of John Carmen, John Smith, Samuel Embree, Joseph Smith, Queens County. At a County Court, or Court of Sessions held for the said County, October the thirteenth, one thousand six hundred eighty and five, the Will of Robert Jackson deceased proved by the oath of Samuel Embree and Joseph Smith of Hemstead. Wells (Mills) or Nicholls.[21]

"ROBERT JACKSON: Was originally a settler of Stamford. Conn. in 1640; in 1644 settled in Hempstead, Queens County, Long Island; m. Agnes Washborne; d. about 1684. Had Samuel and (1) John L.: [John] Was High Sheriff of Queens County in 1691-95; Representative in Colonial Legislature; was Justice of the Peace for Queens County; m. Elizabeth Seaman."

This unique collection of records was extracted from a variety of sources including family group sheets and electronic databases.

Sponsored Search by Ancestry.com
DNA Connections
It may be possible to confirm family relationships with Robert by comparing test results with other carriers of his Y-chromosome or his mother's mitochondrial DNA. Y-chromosome DNA test-takers in his direct paternal line on WikiTree: 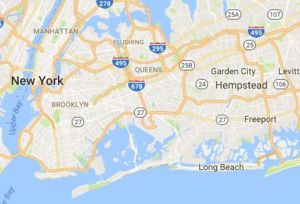 Patricia (Prickett) Hickin
Jackson-16162 and Jackson-595 appear to represent the same person because: Hi, Dick, I feel sure these are the same guy. Are you familiar with "Descendants of Robert Jackson of Hempstead, Long Island, New York" at

Jillaine Smith
I've edited the narrative in alignment with Wikitree's style guide. Links to all the previously mentioned sources have been retained as footnotes.
posted Oct 12, 2014 by Jillaine Smith

Jillaine Smith
Fyi, in general, we encourage original writing and selected (and cited) quotes as opposed to copy/pastes from other web sites. Linking to other web sites -- such as wikipedia and WeRelate.org -- is perfectly fine. See Help:Style Guide then Biographies for recommendations on profile narratives. Thanks.
posted Oct 12, 2014 by Jillaine Smith

Jillaine Smith
Mmm. It looks like the text claiming no proof that Richard had a son Robert has been removed. We need to confirm that robert was indeed son of Richard. Thanks.
posted Oct 12, 2014 by Jillaine Smith