John Daw Jackson was a minister of the Church of Christ and led a long productive life in the church. When he was 84 years old, an article appeared in the Champion, a weekly newspaper published in Center, Texas. That article is published on its entirety. "Sketch of Friend and Church Worker" "We the little congregation of the Church of Christ and the Palm Grove Sunshine Sunday School send a brief sketch of our beloved brother and friend, J.D. Jackson. Brother Jackson's father and mother came from Alabama in 1843; located in Robertson County, Texas, where Mr. Jackson was born May 6, 1856.

In the fall of 1859 his father moved to Rapides Parish, Louisiana. The year 1860 was known as the dry year. In 1861, the Civil War broke out and his father and four older brothers were in the war. His three brothers never came back, but are buried in Richmond, Virginia.

When Mr. Jackson was 21 years old, he married Sarah P. Melton, in Vernon Parish, Louisiana, To this union were born three children, two girls and one boy. His wife and baby died in 1881, leaving him with two children a boy and a girl. Later he married Miss Mellie Bennett, also of Vernon Parish, Louisiana. To this union were born eleven children, six boys and five girls, of whom two have passed away. pe His last wife died May 29, 1934 at Bronson, Texas. Since that time he has made his home with his children and friends. He has been active for many years in Sunday School work and we are looking forward to celebrating his eighty-fourth birthday with us.

He says he feels like his departure is near at hand, but that he keeps his grip packed ready to answer the call at any time, although he is still in good health and active in his church work. If any of his friends or relatives see this, he would be glad to hear from them. He is the only boy of his father's family living. He has two sisters living, Mrs. Alice Jackson of Simpson, Louisiana, and Mrs. Frances McCrany, Port Arthur, North Carolina.

Grandpa, or Uncle John, as he is called by his many friends and relatives, is known throughout Texas and Louisiana and is loved by all that know him. His address is: J.D. Jackson, Route 2, Box 99, Kirbyville, Texas."

John Jackson was a phenomenal man in many ways. He never wore glasses but as he grew older, he could not see as well as he would have liked. He was a vitally healthy man and even had his own teeth when he died. Often he would walk to his daughter's home to dictate his correspondence. He had very strong beliefs and would often ignore the way it might sound, saying exactly what he felt. Sometimes in dictation, Myrtle would change some of the wording so it would not offend or hurt anyone. But when John insisted she read it back to him, he would immediately know which words she had changed or omitted. He would make her change it on the spot and write exactly what he said. Being the remarkable man that he was, it is understandable that he would write his own history to be read at his funeral. That epistle follows: "To All My Children and All Others Who Might Be Interested"

"I'm writing a brief history of life for someone to read as my funeral service.

My father, Allen Jackson and one brother, Josiah Jackson, with six other families immigrated from Conecuh County, Alabama in the fall of 1842. They came by boat to Shreveport, Louisiana, and there they left the boat, bought team, tools, and a few milk-cows and made their way across the country to Robison (sic) County, Texas. They settled down on a little creek called Duck Creek at the edge of what was called Bald Prairie, and it was there that I was born the 6th day of May 1856.

In the fall of 1859 my father and uncle moved to Rapides Parish, Louisiana.

The year of '60 was what was known as the dry year. There was scarecely (sic) anything made in the south.

In 1861 the Civil War broke out my father and four [three] brothers were in the Civil War. My three [two] oldest brothers never came home. They are buried in Richmond, Virginia. So I scarcely had any raising. I merely grew up during and following that Civil War and I got no education.

I was married when I was 21 years old and my wife only lived eight years. She left me with three little children. We both obeyed the gospel the year we married. [Note: Actually his wife only lived for four years after their marriage. She died at the birth of their third child, which also died at birth, leaving two little children, not three.]

Later I married another good, Christian girl. To this union there were eleven children born. I am the father of fourteen children. Two of these died in infancy and three of them died after they were grown and married.

My wife passed away fourteen years ago and I've been living around with my children since that time. Now there is (sic) five generations in my family.

It grieves me to my heart to know that some of my children are not Christians. They have never obeyed the gospel, but thank God its not my fault. I tried to teach them the right way and to set the right example before them.

There is none of my fathers family left now but me and my baby sister who lives in Port Arthur. There was none of my family that I ever knew of that ever lived to be over 76 years old, but the good Lord has seen fit to let me still linger here. I guess he has a purpose in prolonging my life. When I started out in life I adopted the Golden Rule and by this means I have many, many friends.

I am now all down and out, barely can see my way, but Thank God!

I am ready when He calls me. I can say 'Come welcome death I will gladly go with you.

I'm having this written on New Years day, the 1st day of January 1948.

With all my love to everybody--hoping and praying that you will live a life devoted to the service of God so that we can meet in the sweet bye and bye, where there is no more sickness or death, pain or sorrow, no more sad farewells, but everything will be peace or joy.

My life has always been an open book and I'm not ashamed for the Church or court to investigate my life.

I have many good Brothers and Sisters in Christ that I am proud of. I have spen my life working in the church and Sunday [school]' but as to the good I've done the Lord only knows. With all my love to everyone s/s J.D. Jackson 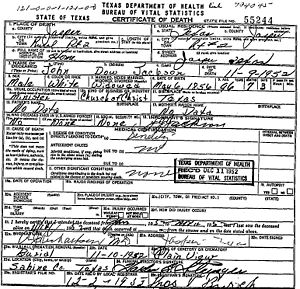 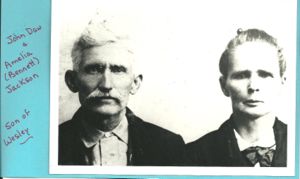 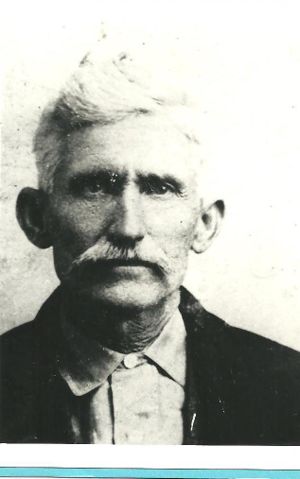