Kazimierz IV Jagiellończyk was a member of the aristocracy in Europe.

Casimir IV KG (Polish: Kazimierz IV Jagiellończyk [kaˈʑimi̯ɛʒ jaɡi̯ɛlˈlɔɲt͡ʃɨk] ; Lithuanian: Kazimieras Jogailaitis; 30 November 1427 – 7 June 1492) of the House of Jagiellon was Grand Duke of Lithuania from 1440, and King of Poland from 1447, until his death. He was one of the most active Polish rulers, under whom Poland, by defeating the Teutonic Knights in the Thirteen Years' War recovered Pomerania, and the Jagiellonian dynasty became one of the leading royal houses in Europe. He was a strong opponent of aristocracy, and helped to strengthen the importance of Parliament and the Senate.

The great triumph of his reign was the effective and final destruction of the Teutonic Order, which brought Prussia under Polish rule. The long and brilliant rule of Casimir corresponded to the age of “new monarchies” in western Europe. By the 15th century Poland had narrowed the distance separating it from western Europe and become a significant factor in international relations. The demand for raw materials and semi-finished goods stimulated trade, producing a positive balance, and contributed to the growth of crafts and mining in the entire country.

He was a recipient of the English Order of the Garter (KG), the highest order of chivalry and the most prestigious honour in England and of the United Kingdom, awarded at the Sovereign's pleasure as his or her personal gift, on recipients from the United Kingdom and other Commonwealth realms.

Is Kazimierz IV your ancestor? Please don't go away!

ask our community of genealogists a question.
Sponsored Search by Ancestry.com
DNA
No known carriers of Kazimierz IV's DNA have taken a DNA test. 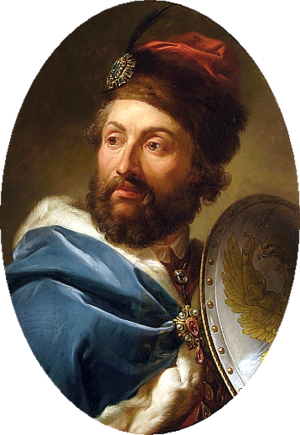 Leave a message for others who see this profile.
There are no comments yet.
Login to post a comment.
[Living Sälgö]
.
posted Oct 01, 2016 by [Living Sälgö]