Zygmunt (Sigismund I) "The Old, King of Poland" Polski formerly Jagiello aka of Poland
Born 1 Jan 1467 in Kozienice, Kielce, Poland

Sigismund I Jagiello was a member of the aristocracy in Europe.

Sigismund I the Old of the Jagiellon dynasty reigned as King of Poland and also as the Grand Duke of Lithuania from 1506 until 1548. Earlier, Sigismund had been invested as Duke of Silesia.

The son of King Casimir IV Jagiellon and Elisabeth of Austria, Sigismund followed his brothers John I of Poland and Alexander I of Poland to the Polish throne. Their elder brother Ladislaus II of Hungary and Bohemia became king ofHungary and Bohemia. Sigismund was christened as the namesake of his mother's maternal grandfather, Holy Roman Emperor Sigismund, who had died in 1437.

Sigismund faced the challenge of consolidating internal power in order to face external threats to the country. During Alexander's reign, the law Nihil novi had been instituted, which forbade Kings of Poland from enacting laws without the consent of the Sejm. This proved crippling to Sigismund's dealings with the szlachta and magnates.

Despite this Achilles heel, he established (1527) a conscription army and the bureaucracy needed to finance it.

After the death of Janusz III of Masovia in 1526, he succeeded in annexing the Duchy of Masovia.

Intermittently at war with Vasily III of Muscovy, starting in 1507 (before his army was fully under his command), 1514 marked the fall of Smolensk (under Polish domination) to the Muscovite forces (which lent force to his arguments for the necessity of a standing army). Those conflicts formed part of the Muscovite wars. 1515 he entered an alliance with the Holy Roman Emperor Maximilian I.

In return for Maximilian lending weight to the provisions of the Second Peace of Thorn (1466), Sigismund consented to the marriage of the children of Vladislaus II of Bohemia and Hungary, his brother, to the grandchildren of Maximilian. Through this double marriage contract, Bohemia and Hungary passed to the House of Habsburg in 1526, on the death of Sigismund's nephew, Louis II.

The Polish wars against the Teutonic Knights ended in 1525, when Albert, Duke of Prussia, their marshal (and Sigismund's nephew), converted to Lutheranism, secularized the order, and paid homage to Sigismund. In return, he was given the domains of the Order, as the First Duke of Prussia. This was called the Prussian Homage.

In other matters of policy, Sigismund sought peaceful coexistence with the Khanate of Crimea, but was unable to completely end border skirmishes. Sigismund was interested in Renaissance humanism and the revival of classical antiquity. He and his third consort, Bona Sforza, daughter of Gian Galeazzo Sforza of Milan, were both patrons of Renaissance culture, which under them began to flourish in Poland and in the Grand Duchy of Lithuania.

On Sigismund's death, his son Sigismund II August became the last Jagiellon king of Poland and Grand Duke of Lithuania.

Sigismund I was a member of the Order of the Golden Fleece.

In 1512, Sigismund married a Hungarian noblewoman named Barbara Zápolya, with whom he had two daughters:

In 1517, Sigismund married Bona Sforza, with whom he had:

Wojciech Olbracht He was called The Old. Also grand duke of Lithuania (1506-48). Sigismund succeeded his brother Alexander. He opposed the rising power of the gentry, allying himself instead with the higher nobles, or magnates, to whom he gave greater authority over the peasantry. Early in his reign he fought a series of indecisive wars with Basil III of Muscovy (1479-1533). By the Treaty of Vienna (1515) he renounced his claim to the Hungarian throne in favor of the Austrian Habsburgs, who in return surrendered their claim to Poland. From 1519 to 1521 he was at war with his nephew, Albert of Hohenzollern (1490-1568), grand master of the Teutonic Knights, and Albert eventually recognized (1525) him as his overlord. A patron of the arts, Sigismund embellished the cathedral and royal palace of Kraków in the Italian Renaissance style.

Is Sigismund I your ancestor? Please don't go away!

ask our community of genealogists a question.
Sponsored Search by Ancestry.com
DNA Connections
It may be possible to confirm family relationships with Sigismund I by comparing test results with other carriers of his Y-chromosome or his mother's mitochondrial DNA. However, there are no known yDNA test-takers in his direct paternal line. Mitochondrial DNA test-takers in the direct maternal line: 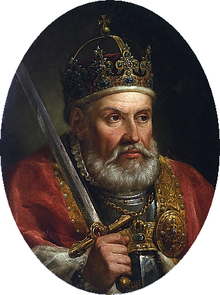