Henry James, OM (15 April 1843 – 28 February 1916) was an American writer who spent the bulk of his career in Britain. He is regarded as one of the key figures of 19th-century literary realism. He was the son of Henry James, Sr. and the brother of philosopher and psychologist William James and diarist Alice James.

James alternated between America and Europe for the first 20 years of his life, after which he settled in England, becoming a British subject in 1915, one year before his death. He is best known for a number of novels showing Americans encountering Europe and Europeans. His method of writing from the point of view of a character within a tale allows him to explore issues related to consciousness and perception, and his style in later works has been compared to impressionist painting.

James was born at 2 Washington Place in New York City on 15 April 1843. His parents were Mary Walsh and Henry James, Sr.. His father was intelligent, steadfastly congenial, and a lecturer and philosopher who had inherited independent means from his father, an Albany, NY banker and investor. Mary came from a wealthy family long settled in New York City, and her sister Katherine lived with the family for an extended period of time. Henry, Jr. had three brothers, William who was one year his senior and younger brothers Wilkinson and Robertson. His younger sister was Alice.

The family first lived in Albany and moved to New York City and took up residence on Fourteenth Street when James was still a young boy. His education was calculated by his father to expose him to many influences, primarily scientific and philosophical

Henry James has been the subject of a number of novels and stories, including the following:

Author, Author by David Lodge The Master by Colm Toibin Lions at Lamb House by Edwin M. Yoder Felony by Emma Tenant Dictation by Cynthia Ozick The James Boys by Richard Liebmann-Smith The Open door, by Elizabeth Maguire The Great Divide by Rex Hunter[50] David Lodge also wrote a long essay about writing about Henry James in his collection The Year of Henry James: The Story of a Novel. 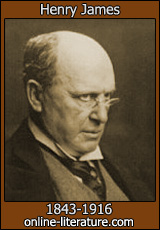 Henry is 21 degrees from Donald Howard, 12 degrees from Julia Howe and 17 degrees from Henry VIII of England on our single family tree. Login to find your connection.