Jesse James was one of the most notorious outlaws in the American West, robbing trains and leading the James-Younger Gang.[1]

Jesse Woodson James married Zerelda Amanda Mimms, a cousin, April 24, 1874 in Kearney, Clay, Missouri.[13][14][13] Jesse's surviving children with Zerelda were Jesse Edward James and Mary Susan James.[13] They also had twins who died in infancy, Gould and Montgomery.[15] Zee, as Zerelda was sometimes referred to, also miscarried one child.[15] Jesse may have been married to a Sioux woman before Zerelda and had a son with her. There has been no definite evidence to back up the family's claims, though.[16]

Jesse served in Captain William Quantrill's Partisan Rangers under Lieutenant "Bloody Bill" Anderson and Lieutenant Archie Clement after the Centralia Massacre, from 1864-5. He was wounded during the surrender at end of the US Civil War.[17][7] He and his brother Frank were part of a group called "bushwhackers", Confederate guerillas in the states of Missouri and Kansas during the US Civil War.[1] Jesse was known as being the "keenest and cleanest" fighter in Anderson's group.[2]

Following the war, the James brothers started their spree of robberies, hitting up banks, stagecoaches, and trains across the Midwestern states.[1] Their crimes were especially brutal and gained them notoriety across the country.[1] Despite a large portion of their gang being captured during a robbery in Minnesota, the James brothers continued to find new members. They experienced increased trouble, though, as law enforcement cranked up their efforts to capture the group.[1] The brothers moved their families to Tennessee for a time, Frank James living under the name Woodson and Jesse under the name of Howard.[18]

A collection of his known exploits:

Jesse James was killed by Robert Ford April 3rd, 1882 at 1318 Lafayette in St Joseph, Buchanan, Missouri.[1][12][19][20][13] Ford and his brother Charley were new recruits to the gang who arranged to use their status within the gang to apprehend Jesse and gather the reward money, as part of an agreement with the local sheriff.[1][13] Governor Thomas Crittenden had offered $10,000 for the capture of Jesse, dead or alive. Jesse was buried in Mount Olivet Cemetery, Kearney, Clay, Missouri.[19] The epitaph on Jesse's headstone in the family cemetery reads that Jesse was "Murdered by a traitor and a coward whose name is not worthy to appear here."[2]

Some people believe Jesse James faked his death.[21][22] Jesse's fame in life became only larger once he died, making him a legendary Wild West figure who was portrayed in stories and entertainment the world round.[1]


Memories: 3
Enter a personal reminiscence or story.
Jennifer Holland
I was notified by Wiki that Jesse is my (2nd cousin 2x removed of husband of 1st cousin 8x removed).

Looking through my family tree on Ancestry.com I see he's on my Mother's side of the family.

The first surname "James" that comes into my family tree shows as followed:

posted 8 Apr 2019 by Jennifer Holland   [thank Jennifer]
Karen Parker
I have a 2 great uncle, Adam Stump Yoakum, who moved from West Virginia to Fannin Co., Texas. There is a story told in my family that Jesse James visited Adam at one time in Texas and carved his initials in the wood fireplace surround. I understand the home burned in the 1970s so there is no proof of this anymore.
posted 3 Apr 2019 by Karen Parker   [thank Karen]
Abby (Brown) Glann
Side note by Kay-Lynne North:

About 10 years ago I was talking to my grandmother (father's side) and great grandmother. While talking to them, they told me that my family were distant cousins of Frank and Jesse James. I don't remember for sure, but my grandmother might have a list of people in our family tree that will show exactly how we are related. I will try to ask her about it in the near future.

posted 1 Apr 2019 by Abby (Brown) Glann   [thank Abby]
Login to add a memory.
Sponsored Search by Ancestry.com
DNA Connections
It may be possible to confirm family relationships with Jesse by comparing test results with other carriers of his Y-chromosome or his mother's mitochondrial DNA. Y-chromosome DNA test-takers in his direct paternal line on WikiTree: It is likely that these autosomal DNA test-takers will share some percentage of DNA with Jesse: 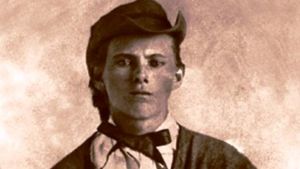 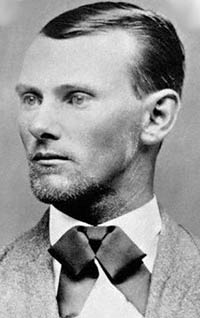 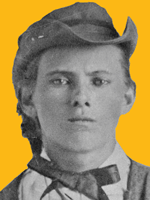 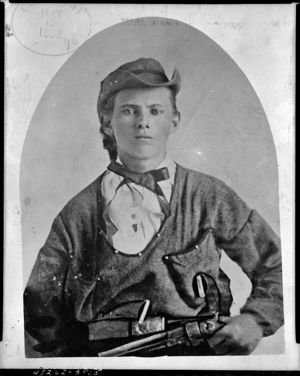 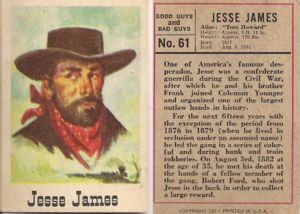 Ginger Davis
I just found out im related to Jesse James because of my mothers mother,mother which would be my great grandmother and her name is Ernestine Tubbs her maiden was Garrett so her name befor marriage would of been Ernestine Garrett when she got married it became Ernestine Tubbs so im related to Jesse James because of my great grandmother on my mom side of the family dont know very much else yet still learning and trying to find all my relatives dead or alive i would like to connect wit my family and get to know them
posted Jan 19, 2021 by Ginger Davis

T.C. Justine Baker
The James' lived down the street from my Sevier ancestors in Hallsville, Missouri for a time. The Sevier farm /home caught fire and they ended up in Liberty, Missouri. I remember growing up and seeing the"birthplace" sign of the James family home. Always was obsessed with them, being nearby and movies, plus a train in my backyard and one in my great-grandma's. Had a feeling was related, from the Gedmatch above (right side) DNA match. So, now I just need to find the line and link everyone together. Too cool.
posted Mar 30, 2020 by T.C. Justine Baker
[Living Corwin]
Jesse James, American Outlaw is your 11th cousin four times removed.
posted Apr 07, 2019 by [Living Corwin]

Jim Yates Jr
I am distantly related to Jesse James via both his Mimms and his Yates.
posted Apr 05, 2019 by Jim Yates Jr
Dan Sparkman
As a serving member of Quantrill's Raiders, Jesse James deserves a Confederate Army icon for his service. There is reason to believe that he never stopped being a Confederate soldier, rather than being an outlaw.

The famous song "Jesse James", was composed by one of his former slaves about his exploits and assassination.

posted Apr 04, 2019 by Dan Sparkman
Jeanette Burton
Have been attempting to untangle my own jungle of Jameses & decided to check in here. Agree with Milton Garrison's posting of a year & a half ago. If "famous" people are so messed up when the correcting data is so easily available, how can the lesser knowns be trusted?
posted Dec 25, 2017 by Jeanette Burton

Milton Garrison
This is so messed up. Susan Lavenia James is shown as a child of Jesse-- she is his sister.

See Jesse and Frank James: The Family History for his Samuel siblings. Under siblings- Susan Lavenia is listed twice--once with her married name of Parmer. Shows he was husband of Amanda Amanda- one Amanda needs to be removed. Please give documentation of when he married Sallie James; I have read all the books I can find on him and I have never seen that he was married to a Sallie or married a second time. Why not do these two proposed merges?

We have added your profile to this space page where we are keeping up with western profiles in hopes of starting a project. Would you be interested in a project about the American West?

Clint Norwood
James-1701 and James-761 appear to represent the same person because: Same Jesse James but if merged it will create one 'ell of a domino effect
posted Jun 10, 2014 by Clint Norwood