No more info is currently available for Charles Jared. Can you add to his biography?

Helps to list all info and sources. If something not known this helps to identify it. Delete this line. If you wish can revert to old using Changes tab.

Charles was born about ...

Other Jared family members in close proximity include:

"need to confirm names and ages"

Charles Jared was born circa 1793 in Bedford County, Virginia.1 He was the son of Joseph Jared and Agnes "Aggie" Beard.1

Sources To Be Replaced With Attached Documents.

Hannah (Whitacre) Jared, died 4 March 1835, Jackson (now Putnam County) Tennessee, married 23 October 1780 (1) Agnes “Aggie” Beard; married (2) 19 January 1802 Elizabeth “Betsy” Baker, born 22 February 1773, died 14 December 1836, daughter of Samuel and Mary Baker. An interesting marriage contract lies in the vaults of the Bedford County Court House in Virginia. It reads “Know all men by these presents that we Joseph Jarrett and George Simmons are held and firmly bound unto Patrick Henry Esquire Governor or Chief Magistrate of the State of Virginia in the sum of Fifty pounds to which paim ‘t. (payment) well and truly to be made to the said Patrick Henry or his Successors we bind ourselves and each of our Joints and several Heirs. Exor’s and Admir’s. firmly by these present. Sealed with our seals and dated this 23 day of October 1 780. The condition of the above oblign is such that whereas there is a marriage shortly to be had and solemnized between Joseph Jarrett and Aggy Beard. Now if there shall be no lawful Cause to Obstruct the s ‘d marriage then the above Oblign. to be void. Else to remain in full force and virtue. Filed with this bond was a paper stating that Margit Young, mother of Aggy Beard gave her consent to said marriage. In the marria ge contract Joseph’s surname is written Jarrett. He signed the documents “Joseph Jared.” Joseph (2) was the second son of John Jared (1), wagon-maker of Virginia and his Quaker wife, Hannah Whitacre. His mother received permission to remove from the Quaker community of Kingswood Monthly Meeting in New Jersey to Loudoun County, Virginia. It is possible, since his mother died before Joseph was three years old that he had no one to tell him his exact place of birth. We do know he was the second son of John. He was a veteran of the American Revolution. He enlisted on the 12th day of October 1779 in— LOUDOUN COUNTY, VIRGINIA at LACEY’S TAVERN—ON BULSKIN CREEK— in the service of the United States as a volunteer.

419 THE BOOK OF JARED His regiment was immediately marched from Lacey ‘s Tavern aforesaid to Richmond, Virginia, with an expectation of going from that place to Hillsborough but when they arrived at Richmond, they were ordered to march on Portsmouth on Nancymond River. After being at Portsmouth a few days they were marched to Cabbin’s Point, here they stayed a few days and were thence marched to an oil field, the distance not recollected, where they were stationed about ten or fifteen days. At this place they built large tents of green pines with much order and regularity as to their arrangement after the manner of streets of a town and in consequence of this circumstance they called the place Green-Town, by which name it has been called and known ever since. From Green-Town they were marched to Petersburg, Virginia, and were stationed about one mile from that place. Here they remained until the time for which they had volunteered, had expired, and during the time they were at this place, the Regiment was reviewed by General Stuban, after which the General complimented the soldiers for their patriotism in volunteering in the service of our country, called them good boys, and then dismissed the soldiers from further service at that time. They received no written discharges. Joseph returned home and remained until sometime in the summer of 1781, and again volunteered in the service of the United States in Loudoun County, Va., and at the same Lacey ‘s Tavern. They again marched to Richmond, thence immediately to Gloucester in Gloucester County near Little York, where he joined the main Army under General Washington. Here he remained during the balance of the summer and fall until sometime after Cornwallis’ surrender. After the battle was over they were employed in guarding the prisoners, until they started to Nowlin g’s Ferry on the Potomac River, to which place they guarded the prisoners. They were again discharged from service without receiving written discharges. He was not engaged in any other battle or engagement but the Battle of Little York. He was engaged in the service during the last campaign at least three months and to the best of his knowledge it was more than that length of time—which together with his first mentioned service would make more than six months—he has no documentary evidence of his services—never having received any written discharges from any of his Officers nor does he know of any person by whom he can prove his services. William Jared was one of the first settlers of Putnam County, Tennessee, arriving there in 1795 to take up his lands and establish his family. He perhaps influenced his brother Joseph to join him. According to Joseph’s statement in the foregoing application for pension, he took up his residence in Jackson County, Tennessee, about 1810.

See also supplement through googlebooks, snippet view only for charles.

Charles Jared was born circa 1793 in Bedford County, Virginia.1 He was the son of Joseph Jared and Agnes "Aggie" Beard.1

ask our community of genealogists a question.
Sponsored Search by Ancestry.com
DNA Connections
It may be possible to confirm family relationships with Charles by comparing test results with other carriers of his Y-chromosome or his mother's mitochondrial DNA. However, there are no known yDNA or mtDNA test-takers in his direct paternal or maternal line. It is likely that these autosomal DNA test-takers will share some percentage (beta) of DNA with Charles: 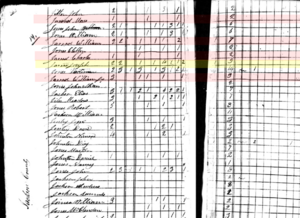