Alwin "Al" Lopez Jarreau was born March 12, 1940 in Milwaukee, Wisconsin, United States of America.[1] Alwin, the fifth of six children was born to Emile Alphonse Jarreau and Pearl (Walker) Jarreau. Alwin was born into a musical and community oriented family. Al's father was a Seventh-day Adventist Church minister and singer, and his mother was a church pianist. Together the family sang in benefits and church concerts. Beyond those events he and his mother would perform at school PTA meetings.

Al is known as a famous American jazz singer. He preferred the genres of Jazz, Rhythm & Blues and soul. He was also known for his expertise in instruments, vocals and vocal percussions. Over the course of his life he won seven Grammy awards and was nominated for around a dozen more. This contemporary jazz artist recorded more than two dozen albums over his career, becoming the first vocalist in music history to receive Grammy Awards in three separate categories (jazz, pop and R&B). [3] Between 1967 and 2017 when he died, Al actively worked under five different music labels including Reprise, Warner Brothers, GRP, Concord, Rhino.[4] Al received the coveted star on Hollywood's "Walk of Fame”, in March 2001. This award cemented his status as one of the best singers of his generation.[5]

Alwin had once been critically ill in the years prior to his death. In his final days Al Jarreau suffered pneumonia resulting in seizures and was hospitalized. Al Jarreau died February 12, 2017 in Los Angeles, California at the age of 76. His death came just weeks after announcing his retirement from touring.[4]

This profile was created by the generosity and kindness of the following individuals. Thank them for their contributions:

Is Alwin your relative? Please don't go away!

ask our community of genealogists a question.
Sponsored Search by Ancestry.com
DNA
No known carriers of Alwin's ancestors' DNA have taken a DNA test. 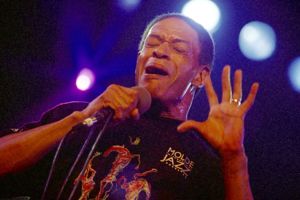