Jasper distinguished himself in the defense of Fort Moultrie (then called Fort Sullivan) on June 28, 1776. When a shell from a British warship shot away the flagstaff, he recovered the South Carolina flag in the Battle of Sullivan's Island, raised it on a temporary staff, and held it under fire until a new staff was installed. In 1779, Sergeant Jasper participated in the Siege of Savannah. He was mortally wounded during an assault on the British forces there.[1][2] 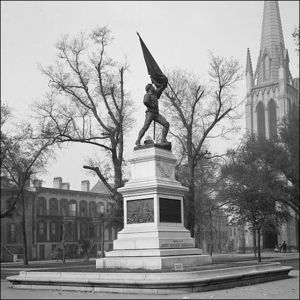