John Jay was a Founding Father in the American Revolution.

John Jay was a part of the Abolitionist Movement.

1st Chief Justice of the U.S. Supreme Court and President of the American Bible Society

"By conveying the Bible to people thus circumstanced, we certainly do them a most interesting kindness. We thereby enable them to learn that man was originally created and placed in a state of happiness, but, becoming disobedient, was subjected to the degradation and evils which he and his posterity have since experienced.

"The Bible will also inform them that our gracious Creator has provided for us a Redeemer, in whom all the nations of the earth shall be blessed; that this Redeemer has made atonement "for the sins of the whole world," and thereby reconciling the Divine justice with the Divine mercy has opened a way for our redemption and salvation; and that these inestimable benefits are of the free gift and grace of God, not of our deserving, nor in our power to deserve."

--In God We Trust—The Religious Beliefs and Ideas of the American Founding Fathers, p. 379.

"In forming and settling my belief relative to the doctrines of Christianity, I adopted no articles from creeds but such only as, on careful examination, I found to be confirmed by the Bible."

Born into a wealthy family of New York City merchants, John Jay is remembered as one of the Founding Fathers of the United States and an astute statesman, politician and diplomat. He was President of the Continental Congress from 1778 to 1779 and the first Chief Justice of the United States from 1789 to 1795.

Jay was instrumental in chartering US foreign policy, serving as the ambassador to Spain and France during the American Revolution. Through the Jay Treaty, he was able to secure better than expected peace terms with both Britain and France. In 1788 he had the distinct honor of writing the Federalist Papers with James Madison and Alexander Hamilton.

Serving as Governor of New York from 1795 to 1801 and the leader of the Federalist party, Jay became a strong opponent of slavery. After two unsuccessful attempts, he was able to pass emancipation for all New York slaves in 1799 - thirty years before his death in 1829. 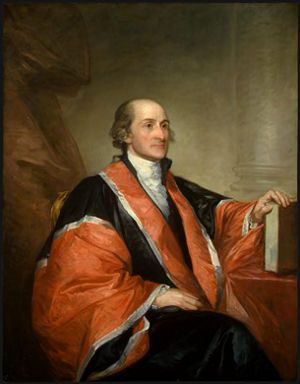 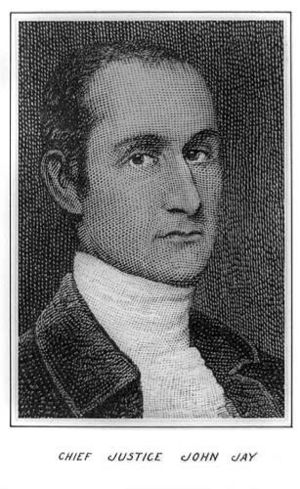 Abby (Brown) Glann
Hi there profile managers! We plan on featuring John as the Example Profile of the Week in the Connection finder on October 6th. Between now and then is a good time to take a look at the sources and biography to see if there are updates and improvements that need made, especially those that will bring it up to WikiTree Style Guide standards. A Team member will check on the profile closer to that date we'll feature it and make changes as necessary.

Liz (Noland) Shifflett
source for his grandson had been a dead link to the family bible. found it through the Wayback Machine of archive.org -

Cathryn (Hallett) Hondros
This page includes a profile engraving of John Jay. http://www.loc.gov/exhibits/creating-the-united-states/formation-of-political-parties.html
posted Jun 22, 2015 by Cathryn (Hallett) Hondros
[Living Jay]
I'm also part of the Jay family! Direct Descendants I think. Through my dad, David Jay. I would love to piece everything together as well, but I don't know where to find resources.

Hope to hear from some more family members soon!