Isham Randolph Jefferson was born about 1791. He was married three times:

Based on Personal Property Taxes recorded in Buckingham County, Virginia, Isham Randolph Jefferson was possibly the second son of Randolph and Anne (Lewis) Jefferson. Called Randolph, Jr. by his family, he appears on most public documents as Isham, Isham R., or I. R. Jefferson. He may have been born as early as 1783/84, very likely before 1788. However, the 1850 and 1860 census records, and his obituaries, indicate his birth was about 1791. In 1834, when Isham Randolph Jefferson married for the third time, it was to a significantly younger woman. It is possible that he adjusted his birth date, lessening the age gap between them.

Isham Randolph Jefferson married for the first time in Fluvanna County, Virginia, on December 20, 1813. His bride was Mary Ann L. Henderson. She was not yet twenty-one years old, and her father, John Henderson, gave his consent for her marriage. Mary Anne was a Lewis cousin, the great-granddaughter of Charles and Mary (Randolph) Lewis.

He died on July 6, 1862 and was buried in Elkton, Todd County.[2] An obituary published in the Nashville Dispatch on August 12, 1862 called him the “nephew and adopted son of Thomas Jefferson,” for which there is no known basis.

Is Randolph your ancestor? Please don't go away!

ask our community of genealogists a question.
Sponsored Search by Ancestry.com
DNA Connections
It may be possible to confirm family relationships with Randolph by comparing test results with other carriers of his ancestors' Y-chromosome or mitochondrial DNA. However, there are no known yDNA or mtDNA test-takers in his direct paternal or maternal line. It is likely that these autosomal DNA test-takers will share some percentage of DNA with Randolph: 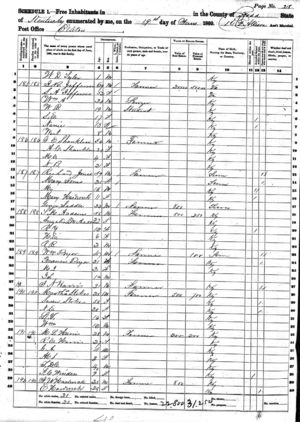