His WWI Draft Registration shows that he (or the draft registrar) filled in September 24, 1894 as his birth date and Wortham as his birth place. Its notable exemption on it: "Blind from birth". His address at this time was 1803 Preston, in Dallas, which is now the southwest corner of a shopping center at Preston & Park Blvd.

Around 1917 he moved to the Deep Ellum section of Dallas, playing on street corners by day and in honky-tonks and brothels at night. Jefferson was known to perform almost daily at the corner of Elm Street and Central Avenue (now covered by Central Expressway) in Dallas.

For a time he partnered with Lead Belly and later gave guitar lessons to a young family friend, T-Bone Walker who was recruited to lead Lemon around the Central Avenue area.

Jefferson was buried at Wortham Negro Cemetery (later Wortham Black Cemetery). The grave was unmarked until 1967, when a Texas historical marker was erected in the general area of his plot, the precise location of which is unknown.

Is Lemon your ancestor? Please don't go away!

ask our community of genealogists a question.
Sponsored Search by Ancestry.com
DNA
No known carriers of Lemon's ancestors' DNA have taken a DNA test. 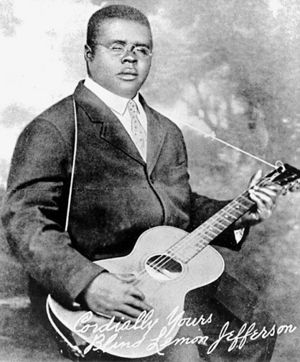