Robert Lewis Jefferson was born about 1786 in Buckingham County, Virginia. He married twice:

Called "Lewis" by his family, Robert Lewis Jefferson was one of Randolph and Anne “Nancy” (Lewis) Jefferson's younger sons. Clear evidence of his familial name is a letter written in 1807, from Randolph to his brother, Thomas Jefferson, which was addressed: "Mr. Thomas Jefferson; pr son Lewis; Monticello; To the Care of Mr. Dinsmore." Although official records tend to record him as Robert L. Jefferson, he was apparently called Lewis until his death. On an Albemarle County survey for Matthew M. Harris dated April 5, 1858, his neighbor was identified as "Lewis Jefferson."

On October 10, 1812, Lewis Jefferson married a Miss M. Jordan in Nelson County, Virginia. They were likely married at the home of her father, William Jordan, who owned land on Elk Island Creek in Nelson. Her first name remains unknown. In about 1814, their only child, Elbridge G. Jefferson, was born. M. (Jordan) Jefferson died before 1820.

In 1828, Lewis Jefferson completed the purchase of a 531-acre plantation on Sharps Creek in Buckingham County, Virginia. On October 6, 1828, in Albemarle County, he married Elizabeth Ann "Bettie" Moorman, with whom he had one daughter, Mary Elizabeth "Bettie" Jefferson. Later, Lewis gave the Buckingham farm to his son, Elbridge, and removed to Albemarle, to operate his wife’s plantation, Rock Castle.

Robert Lewis Jefferson died from cancer on March 13, 1858, probably at Rock Castle, near Warren, Virginia. His death was reported by his son-in-law, Albert Gantt. Lewis’ parents were recorded as Randolph and N. (Nancy) Jefferson. [2]

Is Lewis your ancestor? Please don't go away!

ask our community of genealogists a question.
Sponsored Search by Ancestry.com
DNA Connections
It may be possible to confirm family relationships with Lewis by comparing test results with other carriers of his ancestors' Y-chromosome or mitochondrial DNA. However, there are no known yDNA or mtDNA test-takers in his direct paternal or maternal line. It is likely that these autosomal DNA test-takers will share some percentage of DNA with Lewis: 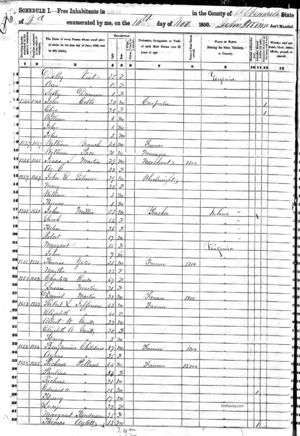