He was the son of Thomas Jervis and Mary Dixon He married Catherine Mundell (abt.1804-1862) on 3rd November 1823. They had 3 sons and 4 daughters: John, Annie, Fredrica, Louisa, Edward, Grace Jervis-397 , Philip. Sir John is buried in St Giles Churchyard, Shipbourne, Tonbridge and Malling Borough, Kent, England where there is plaque to his memory.

Sir John Jervis, PC (12 January 1802 – 1 November 1856) was an English lawyer, law reformer and Attorney General in the administration of Lord John Russell. He subsequently became a judge and enjoyed a career as a robust but intelligent and innovative jurist, a career cut short by his early and sudden death. [1]

Law Reformer, Author and Statesman. He introduced the Indictable Offences Act to English law. He was educated at Westminster School and Trinity College, Cambridge, but took a commission in the army before completing his studies. After two years he resumed his legal training and was called to the bar at the Middle Temple in 1824. He built a substantial law practice on the Oxford, Chester and North Wales circuits. He was a well regarded writer on legal subjects, publishing "Jervis's Office and Duties of Coroners" (1829), and a rewrite of "Archbold Criminal Pleading, Evidence and Practice" (1831). In 1850 he became chair of a commission on practice and procedure at the common law courts. The commission's findings led to the rationalisation of the English courts, and were the beginning of the modern system. In 1848 he drafted three bills to reform the criminal and civil roles of a Justice of the Peace in England and Wales. One of these, The Indictable Offences Act, included the famous caution "You are not obliged to say anything unless you desire to do so, but whatever you say will be taken down in writing and may be given in evidence against you". He also introduced The Petty Sessions Act (1849), forbidding the holding of sessions in premises such as public houses. He became Liberal Member of Parliament for Chester in 1832, holding the seat until becoming a judge in 1850. He was made Solicitor General in 1846 and Attorney General three days later. He organised the prosecution of Chartist activists during the civil unrest of 1848. He was knighted and appointed a Privy Councillor, before dying of lung cancer at age 54.[2] 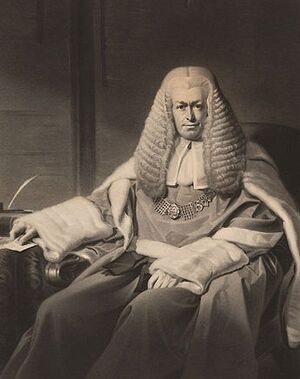