Priscilla was a Friend (Quaker)

"Priscilla, the oldest daughter, married Robert Roberts, in 1703, the son of Hugh Roberts, of Philadelphia, from whom many of this name are descendants.

Robert Roberts was a minister in the Society, and traveled extensively in the cause of truth. He visited England with a minute from Cliffs Meeting, in 1719." [1]

This person was created through the import of LaBach Family TreeApril28_2011.ged on 05 May 2011. The following data was included in the gedcom. You may wish to edit it for readability.

Is Priscilla your ancestor? Please don't go away!

ask our community of genealogists a question.
Sponsored Search by Ancestry.com
DNA
No known carriers of Priscilla's DNA have taken a DNA test. 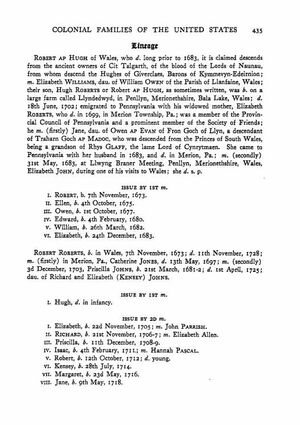