Initially added via Gedcom and unsourced

Note: The sole source utilized within Gedcom uploads are reference(s) to other Family Trees. Please reconnect with valid sources.

Whereas John Johnson son of Ashly Johnson of Amelia Cty and Ledia Hutchins daughter of Strangman Hitchins of Goochland County having declared their intentions before several Monthly Meetings of the people called Quakers in Virginia according to the good order used amongst them whose proposals therein after Deleberate Consideration with request to the righteous law of God were approved of the said Meeting in relation to marriage and having consent and parents and parties conserned.

And the said Johnson and his now wife for a further confirmation there of did then and there to these presents set there hands and we whose names is herrewith subscribed being present amongst other at the solomisation of there sd marriage and subscription in manor aforesaid.

In witness where of have also subscribed our names the day and year above rite :John Johnson :Lydia Johnson

Marriage as it was recorded at the Deep River Monthly Meeting Women´s Minutes, 1843-1892 Whereas John Johnson of Surry County, North Carolina son of Ashley Johnson & Agatha his deceased Wife of Virginia & Jemima Pattison daughter of Joseph Pattison and Sarah his wife deceased of Stokes County, and state affordaid having declared their intentions of marriage with each other before several Monthly Meetings of the People called Quakers held at Deep River In the County of Guilford states afforesaid, accordin to the good order used among them & Nothing apearing to hinder their procedure therein they were alaned by F. Meetings to Acomplish their marriage Acording to good order which they did at a Publick meeting at Muddy Creek Meeting House in Stokes County the Sixth Day of the Sixth Month 1792 in the presence of Many witnesses twelve of whose names are hereunto annexed viz David Brooks, Sarah Brooks, Charles Clasby, Elizabeth Pattison, Joseph Mendenhall, Elizabeth Beeson, Benjamin Johson, Phebe Beeson, Ashley Johnson, Sissly Elmore, Henry Willits, Sarah Stockton.

Thank you to Cindy Ramsey for creating WikiTree profile Johnson-19254 through the import of Cindy Barnett family tree.ged on Jun 5, 2013. 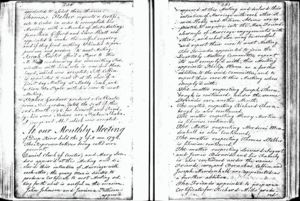 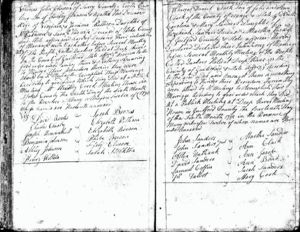 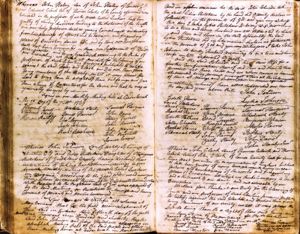 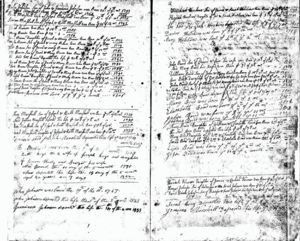 Robin Lee
Per the will of his wife, Jemina names her daughter Sarah (Sally) Patterson, please add her back as his daughter.

posted Jul 01, 2019 by Robin Lee
Celine Anonymous
Hi Lynette, thanks for your reply. It was really intended for the gedcom importers. The message that I posted was stating that the Parent/Children relationships exist for those on the list because they are in the QM records and I had forwarded the records to Paula.

I also sent a private email to you. Thanks!

posted Jun 29, 2019 by Celine Anonymous
Lynette Jester
And yes Celine, we have proof that John and Jemima had a son named John b. in 1793. Its in the 2nd image that says birth of son John. Its at the top of the page.
posted Jun 29, 2019 by Lynette Jester
Lynette Jester
Celine, I'm apologise if we are not working fast enough to your satisfaction. We are all volunteers here, and are members of several projects. Yes, lots of profiles were created and not sourced. Lots of profiles were imported thru gedcoms. Several people thought their ancestry or myheritage tree was enough of a source, which it isn't. Another tree is not an acceptable source. Lots of profiles were orphaned because people didn't understand the concept of Wikitree. And I'm not sure you actually understand wikitree either.
posted Jun 29, 2019 by Lynette Jester
Celine Anonymous
Hi all, I am re-posting a portion of prior question. There has been alot of work since last week. Does anyone have proof that there are more children than the following:

Seems like most of other kids were Gedcom imports referencing un-sourced family trees.