Lyndon Johnson was a Texan.

Johnson served on the US Navy from 1941-1942 as a Lieutenant Commander during WWII participating in the Salamaua-Lae campaign. He was awarded a Silver Star.

For most of his political life, Lyndon B Johnson wore a second world war military decoration for valour under fire despite never having seen combat. LBJ was awarded the Silver Star, the third-highest US combat medal, for a 1942 fact-finding mission over the Pacific while he was a Texas congressman and an acting lieutenant commander in the navy.

The citation, issued in the name of General Douglas MacArthur, said the plane, a B-26 bomber, was "intercepted by eight hostile fighters" and that Johnson "evidenced coolness".

In fact, according to surviving members of the crew, the plane developed mechanical problems before reaching its target and never came under fire. No other crew member received a medal for the mission.

The biographer of LBJ, Robert Dallek, said the medal was the outcome of a deal with Gen MacArthur, under which Johnson was honored in return for a pledge "that he would lobby the president, FDR, to provide greater resources for the southwest Pacific theatre".[2] [3] 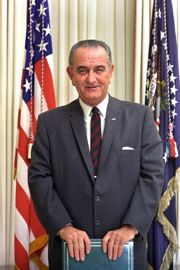 LBJ's political career was an exciting one, coming at a time of rapid social and technology change in the US. He steered through to passage the first civil rights bill in 82 years (Civil Rights Act of 1957). As Chairman of the Senate Preparedness Investigating Subcommittee he began hearings on the Space Program. He considered the vitalization of the space program and the passage of the Civil Rights Act to be the highlights of his Senate Career. As Vice President, LBJ was considered the primary influence for Presifent Kennedy's decision to pursue a voyage to the moon.

LBJ is remembered in the minds of most Americans for stepping into the role of President of the United States on during one of the saddest days in our history, the assassination of John F. Kenedy on November 22, 1963. 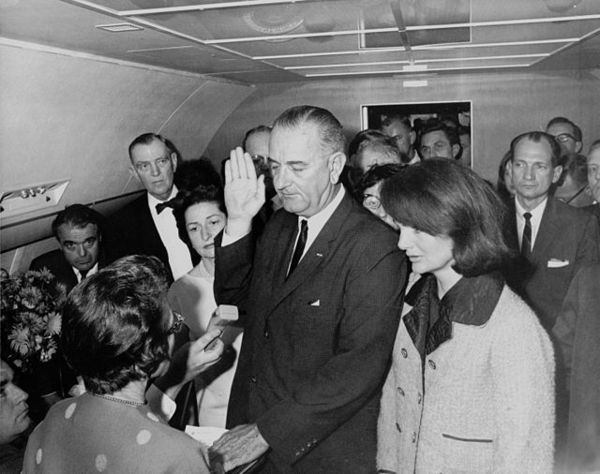 LBJ Being Sworn in Aboard Air Force One

During his inaguration speech, LBJ declared a war on poverty. He is the architect of the Great Society Program. In May of 1965, President Lyndon B. Johnson announced Project Head Start in the White House Rose Garden. He also started the programs Medicare, Medicaid, Food Stamps and Work Study.[4]

In conjunction with the Civil Rights Movement, Johnson overcame southern resistance and convinced congress to pass the Civil Rights Act of 1964. In 1965, he achieved passage of a second civil rights bill, the Voting Rights Act, which outlawed discrimination in voting, thus allowing millions of southern blacks to vote for the first time. Johnson named Thurgood Marshall, the great-grandson of a slave, to sit on the highest court in the land.[5] LBJ's accomplishments were soon overshadowed by his most stubborn challenge.

President Johnson was plagued by the War in Vietnam, convinced that it was crucial that South Vietnam win the war. He escalated the war following the Gulf of Tonkin Resolution, increasing American military personnel in Vietnam from 16,000 advisors in non-combat roles in 1963 to 550,000 with many in combat roles in early 1968. Despite sustained bombing, the widespread use of Agent Orange and rising American casualties, no progress was made in that war. Public demonstrations followed. This along with serious rising crime problems at home contributed to a poor showing in New Hampshire's 1968 Presidential Primary and he ended his bid for re-election. 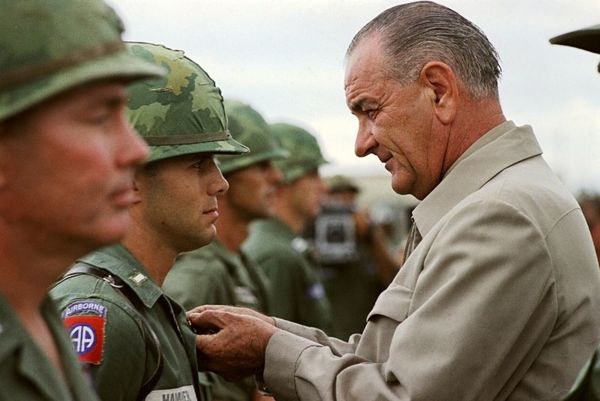 Following his presidency, LBJ went home to his ranch in Texas and wrote books, including The Choices We Face,and Vantage Point: Perspectives of the Presidency 1963-1969, his personal memoirs.

Lyndon Baines Johnson died at his ranch on January 22, 1973, at age 64 after suffering a massive heart attack. His death came the day before a ceasefire was signed in Vietnam. [6] [7] "Various sources cite Johnson City or Stonewall as the location of his death, but neither of these is correct. The ranch is in an unincorporated area 2 miles east of Stonewall (an unincorporated settlement), and 15 miles west of Johnson City (the nearest city). The National Park Service, which owns Lyndon B. Johnson National Historical Park containing the ranch, maintains a visitor center in Johnson City. Senate Resolution 571, 110th US Congress, bends the truth when it states that Johnson 'died at 4[:33PM on January 22, 1973, at his ranch in Johnson City, Texas.'"[8] 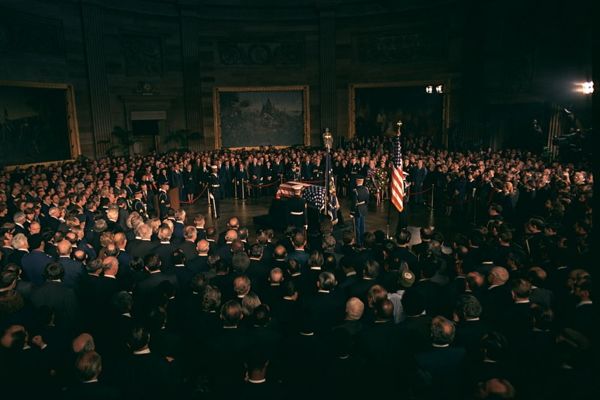 Lyndon B. Johnson Lying in State at the White House

Johnson's was given a state funeral which was held at the National City Christian Church in Washington, D.C., where he had often worshiped as president. He was buried in his family cemetery, a few yards from the house where he was born.

Lyndon B Johnson was awarded the Presidential Medal of Freedom, posthumously in 1980. 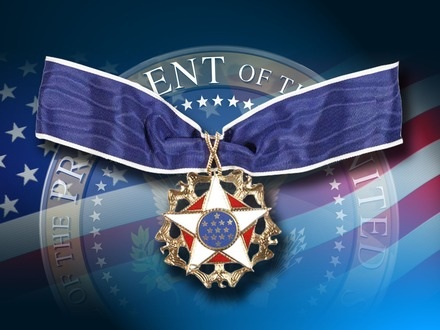 Sponsored Search by Ancestry.com
DNA Connections
It may be possible to confirm family relationships with Lyndon by comparing test results with other carriers of his Y-chromosome or his mother's mitochondrial DNA. Y-chromosome DNA test-takers in his direct paternal line on WikiTree: It is likely that these autosomal DNA test-takers will share some percentage of DNA with Lyndon: 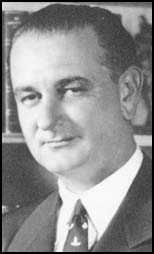 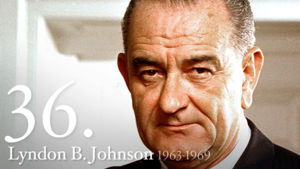 Lyndon B. Johnson taking the oath of office, November 1963 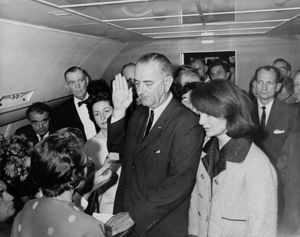 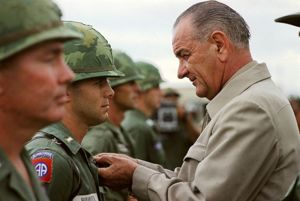 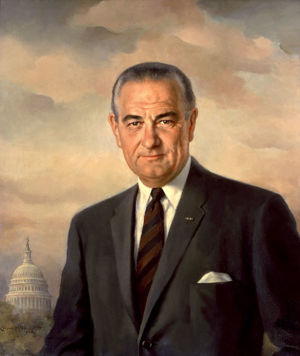 Robin Lee
Please see http://www.wikitree.com/g2g/164107/two-robert-johnsons-of-early-virginia-conflated for a discussion on where the problem with the DNA evidence starts....
posted Dec 09, 2015 by Robin Lee
Tom Brown
There are two men listed under "DNA Connections" who claim to be Y DNA matches to Lyndon Johnson's Y DNA. However, both men can't claim this because they are from different haplogroups. Also, the Johnson group at FTDNA found two close Y DNA relatives of Lyndon B. Johnson that tested their DNA and they are from Haplogroup E1b1b1 or E-L542. See: http://freepages.genealogy.rootsweb.ancestry.com/~hjohnson/johnson_presidents.html

So I conclude from this information that Lonnie and Dennis Johnson are not Y DNA relatives of Lyndon Johnson and that their pedigrees or Lyndon Johnson's pedigree need to be modified so that they no longer connect to a common Johnson ancestor.

Vic Watt
I have been working on Claudia Alta (Lady Bird) Taylor's genealogy, and I noticed, both on her profile and here, she is called "Claudis Alter." I can find no source for this name. I believe that it should be replaced with Claudia Alta.
posted Aug 28, 2014 by Vic Watt