Zachariah Johnston was born in 1742 in Augusta County, Virginia, to William Johnston and Ann Johnston. He attended Liberty Hall Academy and later was a trustee of Washington College. Johnston was a prosperous farmer by the time the American Revolution began. In 1776, he was appointed a captain in the county militia. Johnston's company actively patrolled against Indian uprisings, and, in 1781, participated in the Virginia campaign which led to Lord Cornwallis' surrender. Representing Augusta County in the House of Delegates from 1778 to 1791, Johnston was chair of the House committee on religion and helped pass the "act for establishing religious freedom" in 1786. After he moved to Rockbridge County, Virginia, in 1792, he represented that county in the House of Delegates in 1792 and 1797-1798. An opponent of paper money, and a proponent of court reform and payment of British debts, Johnston supported the federal Constitution in 1788. As Augusta County's representative to the ratifying convention, he was influential in having his section of the state unanimously vote for ratification. In the 1790s, Johnston was interested in connecting Virginia's western rivers to the Potomac River. Johnston owned three plantations in Rockbridge County, one in Augusta County, and lands in Kentucky. He married Ann Robertson (d. 1818), and they had eleven children. He died 7 January 1800 in Rockbridge County.

To view an extract of a book with information about Zachariah and his children, click here.

Is Zachariah your ancestor? Please don't go away!

ask our community of genealogists a question.
Sponsored Search by Ancestry.com
DNA Connections
It may be possible to confirm family relationships with Zachariah by comparing test results with other carriers of his Y-chromosome or his mother's mitochondrial DNA. However, there are no known yDNA or mtDNA test-takers in his direct paternal or maternal line. It is likely that these autosomal DNA test-takers will share some percentage (beta) of DNA with Zachariah: 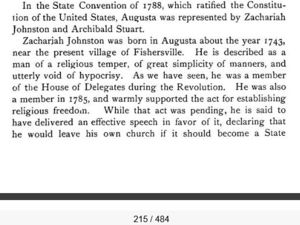 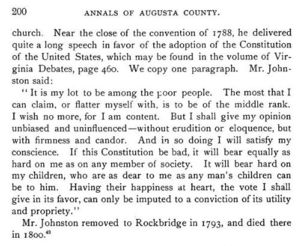 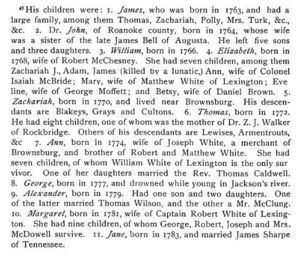