George Johnston was born in Scotland.

George Johnston ... was a marine who came to Australia with the First Fleet

Son of Captain David Johnston aide-de-camp Lord Percy, later Duke of Northumberland. Went to America with his father and took part in the Battle of Bunker Hill. Soldier and Farmer. Served as adjutant to Governor Arthur Phillip, among the first settlers of New South Wales. Assumed the lieutenant-governorship and arrested Bligh during the "Rum Rebellion" of 1808.

George Johnston was born on 19 March 1764,[1] his baptism was on 30 March 1764 at Dumfries and the baptism record gives us his father's name, David Johnston, lieutenant of marines. His mother's name is not given in the baptism record, however we know she was Isabell McKie from a sasine record: "1774: Sasine: in favor of Isabell McKie only daughter of John Mackie, writer, Dumfries, and Mary Hodgeson spouse, both deceased, now wife of Captain David Johnston of the Chatham Division of Marines - 9 roods in Troquer." [2]

Johnston married Esther Abrahams, a First Fleet Convict and fellow passenger on the Lady Penrhyn.[3] Johnston and Esther Abrahams farmed and lived on Annandale with their children until the 1870s when it was sold and sub-divided for residential development. The main street of Annandale is named Johnston and the gates of their property now stand in the grounds of Annandale Public School.

In March 1804 he suppressed the uprising of Irish convicts from the Castle Hill government farm, at the "Battle of Vinegar Hill" fought at Windsor Road, Rouse Hill. Trooper Anlezark was with him when he arrested the leaders just before the battle.

On 26 January 1808 Johnston was one of the leaders of the "Rum Rebellion",[4] a military coup that deposed Governor William Bligh, and Johnston assumed lieutenant-governorship of the colony.

Johnston was promoted to the rank of lieutenant-colonel on 25 April 1808. On 28 July 1808 he relinquished lieutenant-governorship to his senior officer Joseph Foveaux, who had been lieutenant-governor of Norfolk Island. Johnston sailed for England with John Macarthur in March 1809 and was tried by court-martial in May 1811. Found guilty of mutiny he was sentenced to be cashiered.

Johnston returned to New South Wales as a private individual and lived on his land at Annandale. He died on 5 January 1823.

DIED—On Sunday night last, at his seat at Annandale, GEORGE JOHNSTON, Esq. after a severe but rather short indisposition. This Gentlemen is well remembered by the oldest inhabitant, and very much respected in private life. As Lieutenant Colonel of the 102d Regiment (New South Wales Corps) his name will be handed down to posterity, blended with that of Australia ; having assumed the reigns of administration, for a short interval, during the memorable colonial inter-regnum. A large family remain to deplore a fond Parent's deprivation.

The disappearance of George Johnston's diaries has been described as 'an incalculable loss to Australian History' [Bergman p.120]   "George Johnston's diaries of three leatherbound volumes which he wrote from the day he left England to the time of his death were left to his son Robert. They were inherited by grandson Percival Johnston and bequeathed to great-grandson Mr Douglas Hope-Johnston. However they were taken from Percival's bedroom shortly after his death" [in 1926]. [Bergman p.104] Apparently Robert had already destroyed the volume relevant to his father's trial in 1811. [Roberts p106]

Father's name: George or David? We know that George Johnston's father was David Johnston, thanks to the meticulous research of Phyllis Ashworth. Amazingly, in spite of Phyllis Ashworth's work published back in 1980, the incorrect name of George for his father still persists in George Johnston's biographies in Australian Dictionary of National Biography and Wikipedia. The source for this incorrect information is probably the book Australian Men of Mark (pub.1888) and there is a family tree in a file at the Society of Australian Genealogists in Sydney, which has a notation in pencil "Capt George Johnson, 4 Rgt of Foot". Phyllis Ashworth in her book shows that no such person exists and that the father's name was David Johnston.

A local story: Connection to Annangrove? Local tradition in Annangrove suggests the first land grant in the district was 50 acres on Annangrove Ridge, granted to Major George Johnson and that he led the troops of the New South Wales Corps to put down the rebellion of convicts at Vinegar Hill in 1804. It is held by some that Johnson led his men down Annangrove Ridge instead of going along the Windsor Road and surprised the rebels from the rear. His land grant in the area is said to have been from about that time. Please note this is not supported by known records.[6]

See the Changes page for the details of edits by contributors. 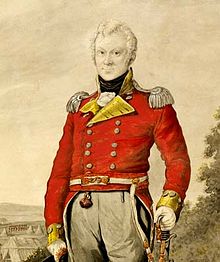 on my father's side of the family.