This profile is part of the Dyess Name Study.

His father bought George his first guitar at age nine and by age twelve, George was earning money playing for tips.

He left home at sixteen to sing and play his guitar for the radio station in Jasper, Texas.

He married in 1950 to (1) Dorothy Bonvillion and they had one daughter, Susan. The marriage ended in divorce.

During the Korean War, George enlisted in the United States Marine Corp, but never had to serve in Korea--he was stationed in California.

By 1954, George had left the Marines and was in Houston, Texas where he cut his first record, “No Money in This Deal.”

Also in 1954, he married (2) Shirley Ann Corley. Their marriage ended in divorce in 1968. They had two sons, Jeffrey and Bryan.

George's first Top Five Hit was called, “Why Baby Why.” Some of the other titles he performed were:

“White Lightning,” “Tender Years,” “She Thinks I Still Care,” “The Window Up Above,” “The Race Is On,” and “Walk Through This World With Me.”

George married Tammy Wynette in 1969 and purchased a home in Lakeland, Florida. They had a daughter, Tamala Georgette Jones.

More country music hits followed: “The Grand Tour,” “A Picture Of Me Without You,” and “The Door.”

After a very stormy marriage, George and Tammy divorced in 1978.

Some of the duets George sang with Tammy were: “We’re Gonna Hold On,” ”Golden Ring,” and “Near You.”

The song, “He Stopped Loving Her Today,” caused Jones to win a Grammy Award, CMA Single of the Year in 1980 and 1981, and Favorite Country Song of all time.

He was inducted into the Country Music Hall of Fame in 1992.

George's 1996 autobiography is called I LIVED TO TELL IT ALL

He received a second Grammy Award in 1999 for his “Cold Hard Truth” project.

George W. Bush honored George Jones with the 2002 Medal of Arts at a White House ceremony in 2003.

Click the Changes tab for the details of edits by Debby and others.

Is George your relative? Please don't go away! 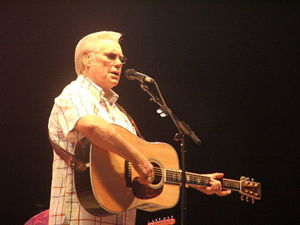 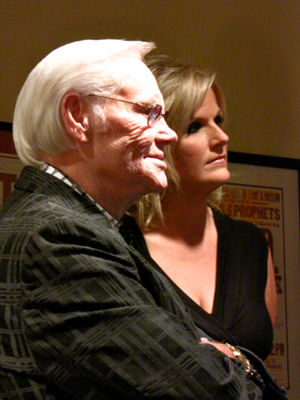