Enoch was a farmer. He also ran a ferry on the Chickasawhay River which ran along the back of his farm in Greene County just west of State Line, MS. This land is described as being in Section 11 T5N R6W and Section 14 T5N R6W commencing at Caswell Bluff on the west side of the Chickasawhay River running due West to section line thence north on line to NW corner of said section then East to said River and thence down West side of river to begining per deed dated 23 Sep 1862. By 1900 he owned the land free of debt. The original deed being recorded 06 Dec 1902.

In 1992, my father made these notes in his family files related to Enoch's life:

This family story was passed on to me by Marvin L. Jones of Buckatuna, MS. This was told to Marvin by W. A. Mason who was almost 100 years old when he died. Mr. Mason said he used to help Enoch make drill pipes that were used for two purposes. 1) To search for well water to be used to run a grist mill that Enoch had, 2) To search for buried treasure. Several familiy stories have alluded to this fascination that Enoch had in regard to buried treasure. Mr. Mason said that he would climb two large trees and then string a bull line (a large rope about 2" in diameter, normally used to tie log rafts) between them with a suspended pulley. This suspended pulley was then used to pull drill pipe from the hole being drilled.

This story comes through the descendants of Thomas Jefferson Davis Jones. A descendant of Tom's has a glass cup that is inlaid with gold trim and was made by Tom's father Enoch. This has led to the belief that Enoch was a gold smith and may be part of the reason for his facination with hidden treasure

Enoch enlisted in Company D, 25th MS Infantry on 10 Aug 1861 in Memphis, TN. The company was merged with others over the year and on 16 Jul 1862 Enoch is listed as part of the 55th Regiment of Alabama Volunteers and as one of those persons over the age of 35 years who will go out of service under the provisions of the Conscript Law.

On 11 Sep 1879, one Paul Jones (identity & kinship, if any unknown) wrote to Enoch asking him where he should send his rent payment as Enoch's agent, William Searcy (also likely related as Enoch's wife's mother was Sarah Searcy Abney), had died. Paul was renting Enoch's property in Beech Springs, Neshoba County, MS and was offering to buy the property outright from Enoch.

About the turn of the century, Enoch and his son Bill [Joseph William] had some sort of misunderstanding or disagreement about a book and something about some hides Bill was tanning for Enoch that resulted in their not having anything to do with one another during the last years of their lives.

Enoch was buried on his family land in Slay Cemetery (a.k.a.Ernest Guy Cemetery), Stateline, Greene County, Mississippi as are many of his family and descendants. Slay cemetery is located at GPS coordinates N 31 23.495 W 88 33.833.

Y- DNA testing has been started on this Jones line, for more information contact Lisa.

equally with the said James Thomas Powell, Mary Powell and Minnie Druzilla Jones the property therein devised to them. I further give and bequeath to my said wife Mary Ann Jones the following described real estate lying and being in the county of Greene and state of Mississippi to wit:
The S1/2 of Section 11 Township 5 North Range 6 West & North lot or North division on West side of Chickasahay [River] in Section 14, Township 5 North Range 6 West with all the improvements thereon to have and to hold the same during her natural life for the use and benefit of herself and family.
To my son Jesse N. Jones and my daughter Martha Davis, wife of E. W. L. Davis, and my daughter Minnie Druzilla Jones, I give one third interest each in one half of all my sheep, cattle above conveyed and given to my said wife, and should there by any more heirs born to me and my said wife they shall share equally with my son Jesse N. Jones, Martha Davis and Minnie Druzilla Jones the above sheep and cattle conveyed after my said wife’s death. I give and beaqueath to Jesse N. Jones, Martha Davis and Minnie Druzilla Jones and any other heirs that may be born to us, but neither of the heirs shall sell or dispose of their interest to the lands only by and with the consent of all the heirs interested.
Signed the 27th day of February 1884
E. S. Jones
Witnesses:
Jesse Byrd
J. B. Peaster
G. T. Grimes
Joseph Robertson
The State of Mississippi}
Greene County } I L. C. Peaster

Justice of the Peace in and for said county and state do hereby certify that E. S. Jones whose name appears on the within and foregoing instrument as his last will and testament devising property after death who before me personally signed the above and foregoing instrument for the purposes therein mentioned.
Given under my hand and seal this 27th day of February 1884
L. C. Peaster, J.P.
The State of Mississippi
Greene County
I, L. C. Peaster, Justice of the Peace of said county and state further certify that the witnesses Jesse Byrd, J. B. Peaster , J. T. Grimes & Joseph Robertson signed their names to the foregoing instrument in the presence of the said E. S. jones and singed in the presence of each other all being done before me. Given under my hand this 27th day of February 1884
L. C. Peaster, J.P.
Greene Co., Mississippi
Transcribed from the original record form pages 12, 13 & 14. This 17th day of May 1902
S. R. McKay, Cahncery Clerk
By order of Board Supervisors April 1902 Term (see Minute Book ‘B’ page 650)

Is Enoch your ancestor? Please don't go away!

ask our community of genealogists a question.
Sponsored Search by Ancestry.com
DNA Connections
It may be possible to confirm family relationships with Enoch by comparing test results with other carriers of his Y-chromosome or his mother's mitochondrial DNA. Y-chromosome DNA test-takers in his direct paternal line on WikiTree: It is likely that these autosomal DNA test-takers will share some percentage (beta) of DNA with Enoch: 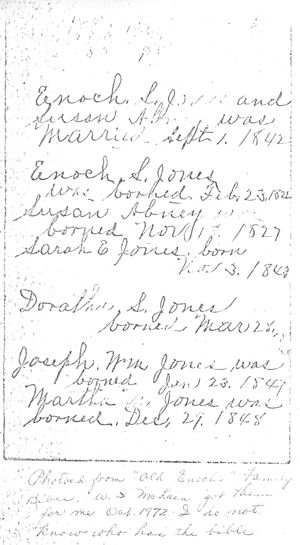 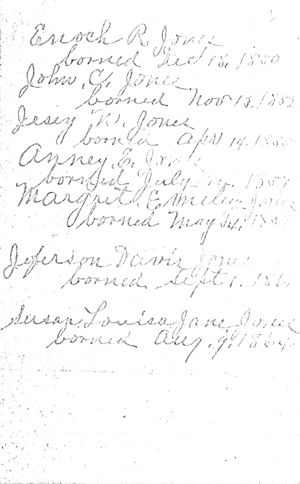 Letter from Paul Jones to Enoch S. Jones, re rents due on Beech Springs, MS property 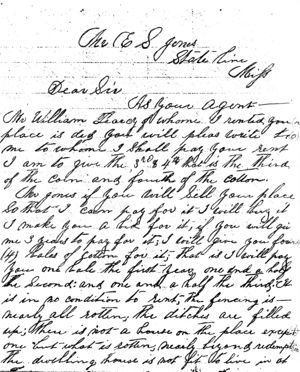 Letter from Paul Jones of Beech Springs, MS to Enoch S. Jones of Stateline, MS (back) 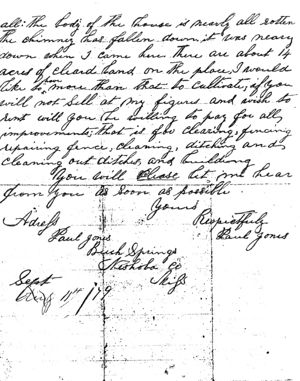 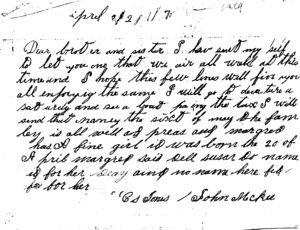 Allan Thomas
Lisa , thank you for this wonderful profile. It is not just a name and dates, it allows one to actually visualize the life of Enoch Jones. What an exciting life it must have been running a ferry on the Chickasawhay River. One wonders if this is the same crossing Jackson took on his route to the Battle of New Orleans. This is a model profile. Thank You Again!
posted Sep 01, 2018 by Allan Thomas