Born circa 1795 in South Carolina, William married about 1819 to Elizabeth Phelps, likely in Edgefield County.

The State of Mississippi

This indenture made and entered into this the 11th day February in the year of our Lord one thousand eight hundred and thirty seven (1837) between Shadrack Jones of the County of Neshoba and State of Mississippi of the first part and William Jones of the State and County aforementioned of the second part. Wittnesseth, that the said Jones for an in consideration of the sum of sixteen hundred dollars to me in hand paid before the sealing and delivery of these presence the receipt whereof is hereby acknowledged, have bargained, sold and delivered unto the said William Jones all the tract of parcel of land situated, lying and being in the county aforementioned designated as follows to wit. - the SE 1/4 of the SW 1/4 of Section 23 Township 9 Range 10 East containing 40 and 24/100 acres and NE quarter of Section 26 in Township 9 Range 10 East containing one hundred and sixy and 14/100 acres and NW 1/4 of the NW 1/4 of Section 25 Township 9 Range 10 East containing 40 and 10/100 acres all in the land district of Columbus together with all and singular the rights, numbers, hereditaments, ...[2]

This indenture made and entered into this the 16th day of January AD 1856 between James J Jones and Mary Jones his wife of the first part and William Jones of the second part, all of the County of Neshoba and the State of Mississippi that the party of the first part, for and in consideration of the sum of twenty dollars to them in hand paid by the party of the second part the receipt whereof is hereby acknowledged have this day granted, bargained and sold and these presents to grant, bargain, sell and convey unto the said party of the second part his heirs and assigns the following described lands lying and being in the County aforesaid to wit.

The 240 acres of land William purchased in Neshoba County, Mississippi in 1837[2] was sold by his son Enoch and other heirs on 27 Mar 1869.[5] He and Elizabeth had sold/donated 5 acres of their land to the Baptist Church of Christ at Ebenezer, Mississippi for 25 cents, with the stipulation that if there was ever not an active church on the site, the land was to revert to his heirs. This church was later known as Beech Springs Baptist Church and cemetery.

William died before May 1857 in Beech Springs, Neshoba County, Missisippi. He appears on the tax list for Neshoba County for 1857 marked "Estate of" (tax year started on 01 May 1857). 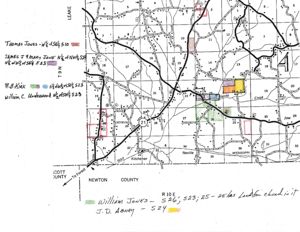 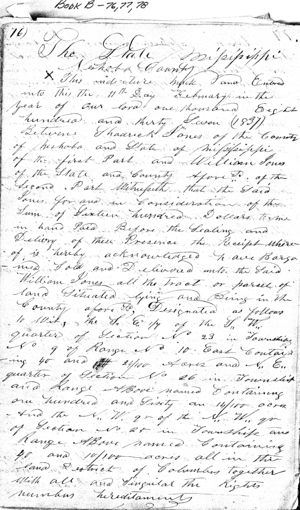 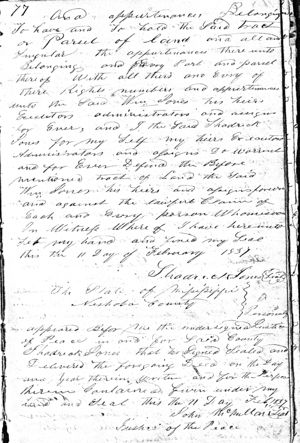 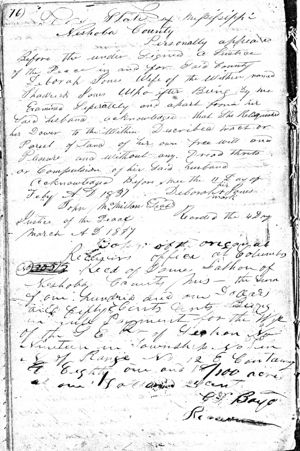 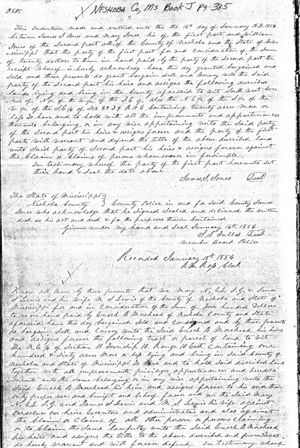