Thomas Goode Jones was born November 26, 1844, in Macon, Georgia. He was the eldest child of Samuel Goode and Martha Ward Goode Jones, both descendants of old Virginia families. Samuel Jones graduated from Williams College, came south in 1839, and embarked on a successful career as a railroad builder in Georgia. In 1850, he moved his family to Montgomery, Alabama, serving as a captain of the home guard during the Civil War.

Jones served in the Confederate army and after the war identified as a conservative “Bourbon” Democrat. He served as Alabama's governor from 1890 to 1894 and as a federal judge from 1901 until his death in 1914. As a veteran, politician, and judge, Jones embodied numerous roles in the shifting political landscape of the South.

Jones was not, however, a reflexive conformist and sometimes pursued policies at odds with his party. Jones’s rhetoric and support of African American civil rights were exceptional and earned him truculent criticism from unrepentant racist factions in his party. His support was so fearless that it inspired Booker T. Washington to recommend Jones to Republican president Theodore Roosevelt as a federal judge. On the bench, Jones garnered national attention for his efforts to end peonage and lynching, and yet he also enabled the establishment of legalized segregation in Alabama, confounding attempts easily to categorize him as an odious reactionary or fearless progressive.

Jones died in Montgomery, his long-time residence, on April 28, 1914, survived by his wife and several children. His son Walter Burgwyn Jones was a long-time state circuit judge in Montgomery.

ask our community of genealogists a question.
Sponsored Search by Ancestry.com
DNA Connections
It may be possible to confirm family relationships with Thomas by comparing test results with other carriers of his Y-chromosome or his mother's mitochondrial DNA. Y-chromosome DNA test-takers in his direct paternal line on WikiTree: It is likely that these autosomal DNA test-takers will share some percentage (beta) of DNA with Thomas: 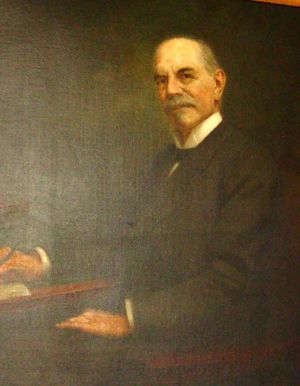 Leave a message for others who see this profile.
There are no comments yet.
Login to post a comment.
Ryan Quinn
Jones-43679 and Jones-36191 appear to represent the same person because: Same birth date, both born in Georgia, first, middle and last name
posted Oct 10, 2019 by Ryan Quinn