Image:Photos-191.gif Robert Haywood Jones is on the

Robert Jones was Killed in Action during World War I.

Robert enlisted on 5 July 1916 as a Private, No. 33050, in 2nd Battalion (105th Foot), The King's Own (Yorkshire Light Infantry). He served with the Expeditionary Force in France from 27 September 1916. He was reported wounded and missing after fighting at Beaumont Hamel 18 November 1916, and later was assumed to have been killed in action about that date.[6] 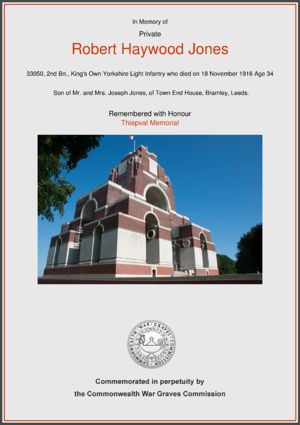 Eric Daly
The 18th of November 1916 was the last day of the Battle of the Somme. Robert was attached with the 2nd Batt Koyli as part of the 97th brigade/32nd division.

Robert was killed in No-Mans Land the Munich Trench, near the junction with Lager Alley Beaumont Hammel

Eric Daly
Robert Haywood Jones was a Manager at the "Public Benefit Boot Company", Doncaster branch. His parents were Joseph Jones born 1851 and Ann Haywood born 1857 in Armley. I can help with the Yorkshire genealogy. I was born Armley myself.

Robert Haywood Jones served in the 2nd Battalion, KOYLI with my ancestors. Eric