We will remember them - Lest we forget
Roll of Honor Military Showcase Profile
SAR Membership Number: 38593[1]

In 1781 Captain Jack raced from Cuckoo Tavern in Louisa County VA to Charlottesville to warn Virginia Governor Thomas Jefferson and the colonial legislature of the approach of British Dragoons. He was a captain in the Virginia militia, as were his three brothers, one of which had been killed at Brandywine. “Commissary” John Jouett, Sr., sold considerable beef and other needed supplies from his Louisa County farm to the quartermasters of the Continental Army. [2]

After the Revolutionary War he settled in Woodford County KY on Craig‘s Creek Pike.

Matthew Harris Jouett (1788-1827), a well known portrait painter of Lexington, KY was his son. Of his famous son Jouett said, "I sent Matthew to college to make a gentleman of him, and he has turned out to be nothing but a damned sign painter." 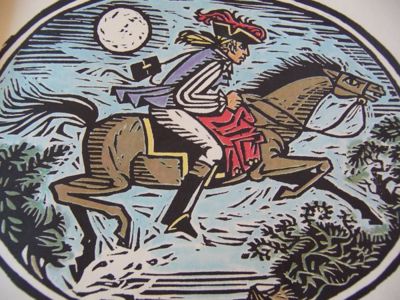 “Captain Jack” John Jouett is called the Paul Revere of the South. His nocturnal ride isn’t so well remembered without a Longfellow to immortalize his feat, but it was every bit as daring and it is likely to have changed the outcome of the Revolutionary War.

The British under Cornwallis had invaded Virginia and Benedict Arnold was marching up the James River to Richmond. Jefferson had adjourned the Virginia Legislature in Richmond in early May, 1781. They were to re-adjourn in Charlottesville. Cornwallis secretly dispatched his “hunting leopard” Tarleton west to Charlottsville with 250 mounted troops to capture the lot, Jefferson, Patrick Henry, Richard Henry Lee, and other assemblymen. “Bloody Ban”, Banastre Tarleton, set out to surprise, then annihilate, the unsuspecting Virginian rebels.

“Captain Jack” John Jouett, captain in the militia and a citizen of Charlottesville, was at the Cuckoo tavern in Louisa napping on the lawn (after an evening of libations some say) when the legion approached on the main road. “Captain Jack” hoisted his six foot four, two hundred and twenty pound frame, (he "evidenced muscular developement and not adiposity")[3] attired in a scarlet coat and military hat and plume and hightailed it to the tavern's stable.

Tarleton halted for three hours at the Cuckoo Tavern to rest his fine Virginia horses, and then pushed on again through the night on the main road.

Suspecting their destination, the 27 year old “Captain Jack” Jouett quickly mounted his well bred mount, Sallie, and riding furiously by a shorter route, the Three Chopt Trail, he covered the forty something miles on the primitive trail, by the light of a full moon.

Tarleton's route lay near Castle Hill and Belvoir; the residences of Dr. Thomas Walker and of Mr. John Walker, his son. They were entertaining members of the Legislature; the houses were surprised and surrounded in the early morning of the 4th, and the host and some guests were taken prisoner. .[4]

"Captain Jack" Jouett stopped at Monticello "a little after sunrise," and warned the Governor, Jefferson, of Tarleton's approach. He must have been a “sight for sore eyes” considering that he would bear the scars on his face and hands from his midnight ride across the primitive trails for the rest of his life. After accepting a glass of Madeira from the grateful governor, he rushed on to alert nearby Charlottesville.[5] 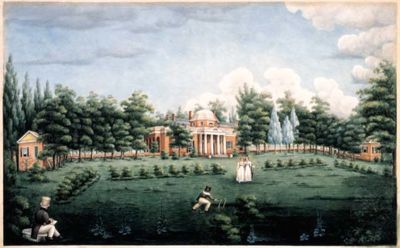 The speakers of the two Houses and several other members were guests at Monticello. They "breakfasted at leisure," and the members of the Legislature then went in to Charlottesville, where the House quickly adjourned to re-convene in Staunton, VA.[6]

In the mean time, Tarleton and his legion pushed on at a steady pace. (Gen. N. Greene had advised the concealment of horses against the British advance. His warning however was to no avail, and the finest stables in Virginia had provided mounts for Tarleton's cavalry.)

Capt. John Jouett, Jr., was a son of the proprietor of the old Swan tavern and lodge located on the courthouse square. The site of this building is now occupied by the Red Land club of Charlottesville, and bears a commemorative tablet placed there by the Daughters of the American Revolution.

Brigadier General Edward Stevens, member of the House of Delegates was having a difficult time executing his escape from the old Swan due to a wound in his thigh he received at Guilford Court House. Here the General's and the Captain's paths converged. And to save the old General the Captain lead the dragoons on a wild chase.[7]

"Attired as usual in the plain dress of a Virginia farmer, and mounted by chance on a shabby horse, he was soon overtaken by the dragoons. But a little way ahead was more attractive game-a horse-man in a scarlet coat and military hat and plume, and probably therefore an officer of rank. The soldiers spurred on without noticing Stevens, who soon turned aside and escaped. The showy gentleman was no officer, but the same Mr. Jouett, who had an eccentric habit of wearing such habiliments. After he had coquetted with his pursuers long enough, he gave his fleet horse the spur, and was speedily out of sight." [8][9]

From Mr. Jefferson's "Miscellaneous Papers," is the following:

In Mr. Jefferson's own words Jack Jouett's Ride is verified.[10]

"Learning that the Legislature was in session in Charlottesville, they detached Colonel Tarleton with his legion of horse to surprise them. As he was passing through Louisa on the evening of the 3rd of June, he was observed by Mr. Jouett who suspecting the object, set out immediately for Charlottesville, and knowing the by-ways of the neighborhood, passed the enemy's encampment, rode all night, and before sunrise on the 4th called at Monticello with notice of what he had seen and passed on to Charlottesville to notify the members of the Legislature." [11]

The following resolution was passed by the Virginia Assembly on the 12th of June for the gallant service of Capt. Jack Jouett:

Resolved: That the Executive be desired to present to Capt. John Jouett an elegant sword and pair of pistols, as a memorial of the sense which the General Assembly entertain of his activity and enterprise in watching the motions of the enemy's cavalry on their late incursion to Charlottesville, and conveying to the Assembly timely information of their approach, whereby the designs of the enemy were frustrated, and many valuable stores preserved" [12]

In an attempt to help promote Jouett's memory, the Charlottesville Daily Press published the following poem on October 26, 1909:

How he rushed his steed, nor stopped nor stayed

Till he warned the people of Tarleton's raid.

The moment his warning note was rehearsed

The State Assembly was quickly dispersed.

In their haste to escape, they did not stop

Until they had crossed the mountain top.

And upon the other side come down.

To resume their sessions in Staunton Town.

His parting steed he spurred,

In haste to carry the warning

To that greatest statesman of any age,

You made the greatest ride, sir,

That ever yet was seen."

He moved to Kentucky in the Spring of 1782 and took up a military land grant there in what became Mercer County, Kentucky. Kentucky was then a county of Virginia and he served as elected representative to the Virginia and Kentucky legislatures for five terms. He married Sarah 'Sally' Robards, a former girlfriend from Virginia, and raised his family of 12 children.[13]

In his later years "Captain Jack" was the friend of Andrew Jackson, Henry Clay, and the great families of Kentucky.

He imported livestock from England and pioneered the breeding of livestock in Kentucky. He died 1st of March, 1822, in Bath County, Kentucky. He was buried in the family cemetery at his daughter's farm, Peeled Oak, but the grave was unmarked, and it took the late Mrs. Joel M. Cochran of Charlottesville, Virginia, to find the spot where the old hero was laid to rest.

"His feat was more daring than Paul Revere’s, but Virginia’s hero had, alas, no Longfellow'" Virginius Dabney

”Jack Jouett gave some of America’s greatest patriots a timely warning in one of the Revolution’s dark hours, but his valorous deed has been well-nigh forgotten. He deserves a kinder fate.” Virginius Dabney

Woods, Edgar; Albemarle County in Virginia: Giving Some Account of what it was by Nature, of what it was Made by Man, and of Some of the Men who Made it(Google eBook)Michie Company, printers, 1901

The event's of the day have varied interpretations. This memory of The Rev. Mr. Fossett, former Jefferson slave, is worthy of consideration: "Once the Slave of Thomas Jefferson"

" My mother's uncle saddled his horse and took him up to Carter's Mountain, where Mr. Jefferson hid in the hollow of an old tree." 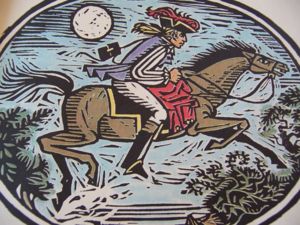 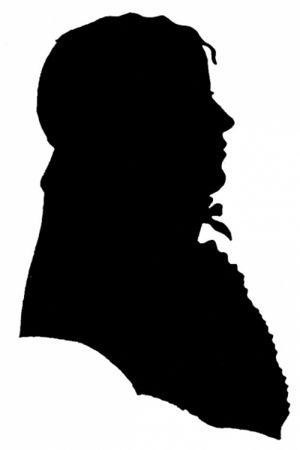 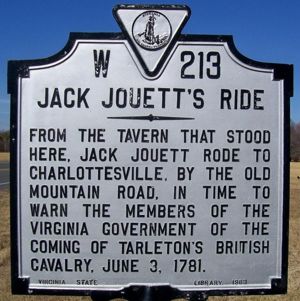 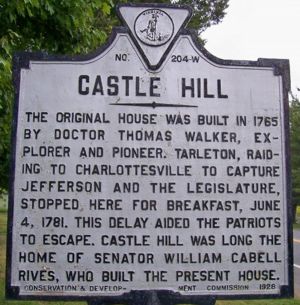 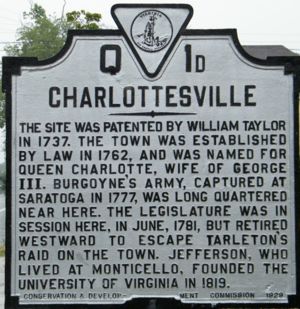