Naomi was also the fifth great-grandniece of Jenny Wiley. She was a descendant of John and Catherine Elizabeth Sellards Borders (Jenny’s older sister).

She married Michael Charles Ciminella in Virginia in 1964.[3] They were the parents of Wynonna Judd and Ashley Judd. They divorced in 1972.[4]

Naomi was the wife of Larry Strickland whom she married in 1989.

She and her eldest daughter, Wynonna, made up the country music duo The Judds. Her other daughter, Ashley Judd, is a noted actress.[5]

Sponsored Search by Ancestry.com
DNA
No known carriers of Naomi's DNA have taken a DNA test. 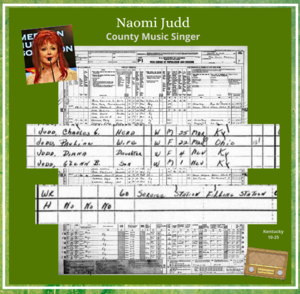