Israel Kamakawiwo'ole was born 20 May 1959 in Honolulu in the Territory of Hawaii., United States. (Hawaii officially became a state later that year.) His skillful ukelele playing as well as his incorporation of genres such as jazz and reggae made Israel a very strong influence in Hawaiian music. His medley of "Somewhere Over the Rainbow/What a Wonderful World" has been used in several television commercials, programs and films.

Israel is the son of Henry Kaleialoha Naniwa Kamakawiwoʻole, Jr., and Evangeline Leinani Kamakawiwoʻole, also nephew of well known Hawaiian musician, Moe Keale. Israel started playing music at the young age of 11 with his brother and his cousin. Hawaiian musician Del Beazley spoke of the first time he heard Israel play, when, while playing for a graduation party, the whole room fell silent on hearing him. The three parted ways when his brother joined the Army and later his cousin moved to mainland Hawaii. Israel continued on with his goal to make music that stayed true to the traditional sound of Hawaiian music.

In 1992, Israel married his childhood sweetheart Marlene. Soon after, they had a daughter whom they named Ceslie-Ann "Wehi".

Throughout his life, Israel struggled with morbid obesity, at one point weighing as much as 767 pounds. Due to respiratory, heart and other medical problems, he died at the age of 38, on 26 June 1997. 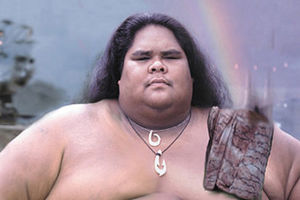 Jamie Nelson
Kamakawiwo'ole-5 and Kamakawiwo?ole-1 appear to represent the same person because: They are the same man -- the difference in spelling has to do with the ' character.
posted Nov 30, 2017 by Jamie Nelson