Nisargadatta Kambli was born in India

A question mark lay over the exact date of Maruti's birth, although it was known to have coincided with 'Hanuman Jayanti', the birthday of Hanuman, after whom Maruti was named, which in 1897 was calculated to be 17 April. When, later in life Nisargadatta Maharaj was asked about the date of his birth, "the Master replied blandly that he was never born!" (Frydman, 1973, p.xi.) Although he was born in Bombay, to Shivrampant Kambli and Parvatibai, where his father had worked as a domestic servant, they moved to the village of Kandalgaon, south of Bombay in Maharashtra State, with his father a petty farmer, and where Maruti grew up with 2 brothers and 4 sisters[1]. Frydman (op.cit) has that Maruti had 3 brothers and 2 daughters, as do Gogate and Phardol, 1972, who have it that Maruti's father was in the service of a merchant of Colaba in Bombay, up to 1896, when at the outbreak of an epidemic of plague in that year in Bombay, moved his family to Kandalgaon near his home town Revan, where he had purchased some land[2].

Both his parents were deeply religious, but David Godman said that Nisargadatta "just didn't seem interested in talking about his past"[3], neither his childhood nor his family. However, Gogate and Phardol, 1972, notes that Maruti was greatly influenced both by his parents rigorous devotional life, and by the virtuous life of a friend of his father, Sri Vishnu Haribhau Gore. He did have some schooling, up to Standard IV, at Kandalgaon Elementary School, liked tending cattle and taking them into open country and the jungle, "while the mysterious and wonderful play of nature both tormented and enthralled his mind and provided him with inspiration for love of God". Poverty and distress also tormented his mind, but he had an obliging and friendly nature.

Maruti's father made his transition in the 1st quarter of 1915, when he was aged 17, so as farming was a poor means of making a living his elder brother went to Bombay in 1916, Maruti following him in 1918 but returning from time to time to look after the land. He finally settled in Bombay in 1920[2], where he first went to night school to learn basic English. His nature allowed him to develop entrepreneurial skills and he was to become a successful businessman.

In 1924 he married Sumatibai, who gave him 3 daughters and a son. With a busy family life and a busy business life, Maruti, who was a keen reader of spiritual books, still found time for devotions. He also had his mother living with him.

Amongst his business friends was another kind devotee of God by name of Sri Yashwantrao Baagkar, who received initiation from Sri Siddharameshwar Maharaj[4]. Although reluctant, Baagkar finally succeeded in getting Maruti to go with him for Darshan with Siddharameshwar, who initiated him and taught him how to meditate. By the end of 1933, Maruti had become a Sadhak or Sadhaka - someone who follows a particular sādhanā, or a way of life designed to realize the goal of one's ultimate ideal, whether it is merging with one's eternal Source, brahman, or realisation of one's personal deity[5].

The relationship between Sri Siddharameshwar Maharaj, Maruti's Sadguru (true guru[6]), whom he was totally obedient to, completely changed Maruti's life. His zest for family and business life waned, although he was still occupied with daily business activities.

However, on 9 November 1936, his Sadguru made his transition, his body, aged 48, was buried by the Indian Ocean, his shrine on the Banaganga Walkeshwar cremation ground but not cremated, as he was an enlightened being[4]. He was grief stricken and lost all interest in his businesses, and was ... by some of his Sadguru's last words - "is there one [Disciple] who is ready to renounce material life completely for the sake of his Sadguru's word?"[2].

In 1937, with those words constantly in his mind, he decided to renounce material life completely. Without telling his family or his business employees he set off to walk the 360kms to the pilgrimage town of Pandharpur east of Bombay. There he exchanged his expensive clothes for saffron, marking the change to his thinking from the outer to the inner, and also symbolising his penniless wandering. This took him, on foot, to Rameshwar in the far south of India, before turning north again to Solapur, and continuing northwards to Agra, and Delhi, where he decided to go to the Himalayas.

He had had many mystical experiences on his journey that he attributed to his Sadguru, who was always uppermost in his mind, and he met a brother disciple in Delhi, who convinced him that he should return to Bombay, as he had a moral responsibility to support his family, and he had already demonstrated complete renunciation of his worldly life during the many months he had been away.

Timothy Conway has it that: "After his eight months of wandering, pilgrimage and full awakening from the dream of “me,” Nisargadatta came once again to Bombay in 1938"[7]. With most of his businesses gone, he reduced to one small alcove shop sufficient to provide for his and his family needs living in the Vanmali Bhavan Building at 10th Lane in the downtown Khetwadi area.

From 1941, for the next 25 years he had intense spiritual discussions with a brother disciple, Sri Bhainath Maharaj, every evening after closing the shop, long into the night, until he retired from business in 1966. During that period, from 1942 to 1948, his mother, wife and a daughter passed on, and whilst many devotees waited outside his shop to see him and asked for Name Mantras to help them on their paths, he declined to take on the role of Sadguru.

It wasn't until 1951 that he obeyed the will of his Sadguru and started to give true aspirants their requests. With increasing numbers and the need for them to have a place for their spiritual practices, he completed the enlargement of the mezzanine floor at the apartment to full size, serving as an Ashram. Much larger places were used for holidays and holy days.

His son looked after the shop after he retired in 1966.

"In the recent past [late 1960s, early 1970s] the number of disciples of Shree Maharaj in the city of Bombay and in other places has considerably increased. He undertakes tours four or five times a year to visit, along with some disciples, holy places like Bagewadi, Inchgeri, [and] Siddhagiri, which are the birth places of Sadgurus in the [Navnath] Sampradaya. He also visits, though rarely, the places of disciples who stay out of Bombay." (S. Gogate & P.T. Phadol, 1972, Meet the Sage, pp. 32, 30, 29-30) [Inserts[7]]

Travel was reduced in the late 1970's due to the body's increasing age and illness - throat cancer, from which his body was to succumb on 8 September 1981, aged 84. The publication of 'I AM THAT' in 1973 "began to draw a greater number of people than could be squeezed into his little mezzanine loft"[7], which Timothy describes, from personal experience as "marked by a strong, strangely beautiful peace". He added that "Numerous framed photos and images, including not just Sri Siddharameshvar and the Navnath line of gurus, but other sages like the illustrious Sri Ramana Maharshi, J. Sri Krishna Krishnamurti, Maurice Frydman, and even a painting of Maharaj himself, gazed down beneficently from their position high along the walls. He greatly respected and loved Maurice Frydman, who had been responsible for producing 'I AM THAT', and was at his bedside when Maurice made his transition.

Nisargadatta's only subject was: " ...our real Identity as the birthless-deathless, infinite-eternal Absolute Awareness or Parabrahman, and its play of emanated universal consciousness", which "is the underlying I Am" Eckhart Tolle (2008, p.135). For Maharaj, our only "problem" (an imagined one!) is a case of mistaken identity: we presume to be an individual, and, originally and fundamentally, we are not an individual, we are intrinsically always and only the Absolute"[7].

Is Nisargadatta your ancestor? Please don't go away!

ask our community of genealogists a question.
Sponsored Search by Ancestry.com
DNA
No known carriers of Nisargadatta's ancestors' DNA have taken a DNA test. 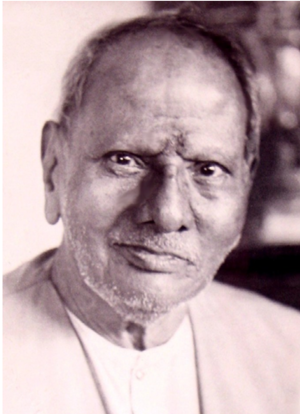