Frederick K. Kenaston, 79, former president of the Minneapolis Threshing Machine Co. and for nearly a half century prominent in the farm machinery business and in banking in the northwest, died Tuesday morning at San Marino. Calif., his home for the past three years. Mr. Kenaston sold his Interest In the threshing machine company, the plant of which was at Hopkins, when it was merged with other industries to form the Minneapolis-Mollne Power Implement Co.

Since then, he had lived In California, wtth the exception of yearly visits to Minneapolis. The old Kenaston home, at 2426 Hennepin avenue, for many years a Minneapolis landmark, waa torn down two years ago. Mr. Kenaston, whose career included many years in banking as well as In the implement business, was a director of the Northwestern National hank and Minnesota. Loan & Trust Co. for many years before his death, and also was vice president of the south Minneapolis affiliate, the Fourth Northwestern National bank. Funeral services for Mr. Kenaston will be conducted Thursday at the Wee Kirk of the Heather, at Glendale. Calif. He Is survived by his wife, Mrs. Mary Hartzell Kenaston; and six grandsons, John F., Robert P., Roderick W.. Gordon A.. James M. and Douslas A. Kenaston. all living in California.

Mr. Kenaston was born November 14, 1853, In Scotland, the son of Joseph and Jannete Eno Kenaston. At the age of three, he moved to Canada with his mother, landing at Quebec. There his mother died from the effect of typhoid fever contracted on the voyage.

His father already was living In Canada, as an employ of tha Hudson's Bay Co. in Labrador. The boy was taken by dog team to Join his father in the far north.

Father Killed.
When Mr. Kenaston was seven, his father was killed while at work with a logging crew, and the boy lived with an aunt until he was 14. Then he came to the United States to live with an uncle near Northwood, Iowa. From 1873 to 1874, he was engaged in mining work in the South Dakota Black Hills, but returned to northern Iowa to enter the farm machinery business.

After working in a retail Implement store for three years, he joined the organization of the D. M. Osborne Machinery Co. He also served for a time as sheriff of the county in which Northwood is located. He worked for the Osborn company as a sales representative, and it was as district sale manager of the company that Mr. Kenaston came to Minneapolis in 1881.

Opens Bank In State.
He represented the company In Minneapolis until 18S5. when he qutt the Implement field for a time to take up country banking. He organized a bank at Breckenridg. Minn., and was its executive head. He also established banks in several other western Minnesota towns, and operated them until 1897.

Then he returned to Minneapolis and to his former occupation. He purchased the MacDonald Threshing Machine Co., reorganized it as the Minneapolis Threshing Machine Co., and moved It to Hopkins. He served as president and directing head of this company for 32 years, during which he occupied an Increasingly Important place in business and finance in Minneapolis and In the Implement Industry of the entire country. Mr. Kenaston also was president at different times of the Northwest Thresher Co. of Stillwater, Minn., and the American-Abell Engine & Thresher Co., Ltd., of Toronto.

During the World war he financed organization of the seventeenth battalion of the Cameron Highlanders of Canada. Mr. Kenaston was a Presbyterian, a member of Masonic bodies of the Minneapolis and lnterlachen clubs and of the Manitoba club at Winnipeg.

ask our community of genealogists a question.
Sponsored Search by Ancestry.com
DNA
No known carriers of Frederick's DNA have taken a DNA test. 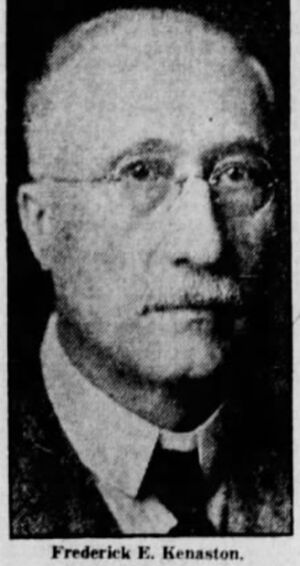