Thomas Walter Kendall was born in 1778 in Lincolnshire, England to Edward Kendall and Susannah Surflit. He was one of New Zealand’s first Christian missionaries and was based at the Church Missionary Society station in the Bay of Islands from 1814 until 1821. He pioneered the transcription of the Māori language, and also investigated how Māori understood the universe. In doing so, however, he attracted hostility from others in the Australasian mission world.

On a trip to London in 1805, the 26-year-old Lincolnshire grocer and draper from Lincolnshire had a profound religious experience. Soon afterwards he sold his business, moved his family south, and became an ardent member of the congregation of Bentinck Chapel, in Marylebone. In 1808 Kendall asked the Church Missionary Society to send him to New Zealand, but it was not until 1813 that he was chosen to be the schoolmaster at the planned mission settlement. He finally set sail, with his family, on 31 May 1813 on board the Earl Spencer arriving at Port Jackson, Australia on 10 October.

The mission was founded at Rangihoua, in the northern Bay of Islands, in December 1814, under the patronage of the chiefs Hongi Hika and Ruatara. It comprised three missionary families. The following year Kendall had the first book in Māori published in Sydney, and in 1816 he opened his missionary school. Education was an important way of introducing Māori children to Biblical scripture and European ways.

In a series of letters written between 1822 and 1824, mostly to the CMS, Kendall attempted to describe Māori cosmological thought. One of Kendall’s conduits into understanding the Māori way of life was Tungaroa, the daughter of the tohunga of Rangihoua, with whom he had an affair. On learning of this, Samuel Marsden, his Sydney-based CMS superior, dismissed Kendall from his post. Although Kendall went on to hold another clerical post in Chile, he claimed in 1822 that the ‘apparent sublimity’ of Māori ideas had ‘almost completely turned [him] from a Christian to a Heathen’. He resolved this contradiction in his own mind by maintaining that Māori beliefs must somehow have been derived from scriptural knowledge.

In 1825, Kendall accepted a position as clergyman at the British consulate at Valparaiso, Chile, but the job did not last and he went to New South Wales in Australia[1], which he had sailed to in 1813, with his wife and 5 children, on the way to New Zealand. This time he obtained a land grant, in 1827, of 1,280 acres (5.2 km2), including large stands of cedar at Narrawallee Creek, Ulladulla, and property at Kiama, both on the South Coast of New South Wales. Two records indicate that he visited the Ulladulla area in 1828 where Millard's Creek enters what is now the harbour and there was a camp of Aboriginals on the north side[2].

Reverend Thomas Kendall also continued work as a clergyman throughout Illawara, the northern part of the South Coast[3].

He died in 1832 by drowning when the cutter "Brisbane", which he had purchased to transport the cedar and other produce from his farm, sank with all hands off the mouth of the Shoalhaven River[5], while transporting wood and cheese to market in Sydney.

The date of death is uncertain. The boat went missing, but there is no certainty on the exact date.

As of 1 Jan 2022, there are 28 DNA descendants related to Campbell Braddock on Ancestry.com via ThruLines. Below are the children and their DNA descendants. 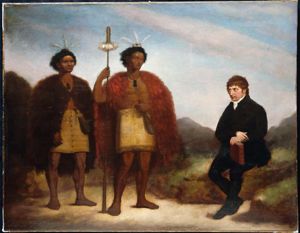