Harry Kershaw was born in March, 1881 in Manchester, England [1] His parents were George W. Kershaw and Jemima Kershaw.[2]

Harry married Ethel Briggs in Chorlton, Lancashire, in the latter part of 1904. T [3]

Emigration to the United States

Harry's sister Margaret Jane Willman and her family emigrated to the United States in April 1913. Harry was listed as a relative back in England, living at 66 Longridge St. in Longsight, Manchester. Harry followed in December 1913 on the 'SS Alaunia', leaving his wife and children in England.[5].Ehtel sailed to the United States, with her three children, onboard the SS Carmania, leaving Liverpool on 14 April 1914.[6]

In 1930, Ethel and Harry were living in Lynn, Essex, Massachusetts, USA, in the home of their son in law, Robert Leschke (b. Germany) and daughter Ethel. With them were sons Edwin. (age 20) and Robert H. (age 7. b. in Massassachussetts). Harry worked as a wood heeler in a shoe factory.[8]

Ethel (Briggs) Kershaw passed away on 18 April 1935 in Lynn, Essex County, Massachusetts and is buried in Pine Grove Cemetery, Lynn. [9]

It appears that Harry remarried after Ethel's death as he appears on the 1940 Census married to Emma, (who previously lived at Haverhill Mass.) His son Robert H, age 17, was living with them, and working as a clerk in a retail grocery store.[10]

Harry died in May 1940 and is buried at Pine Grove Cemetery in Lynn, Essex County, Massachusetts, USA.[11]

Quite a few possible sources come up for his time in the USA, which are behind the Ancestry.com paywall. It would be wonderful if someone with access to those sources could complete this profile. 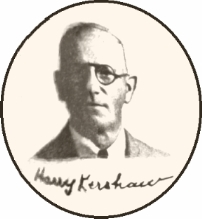