Josef Kessler is a Volga German.

Josef Alois Kessler was born in 1862 in Louis (Ostrogovka), Russia. He was the son of Volga German colonists. To this day, he is the last archbishop of the Diocese of Tiraspol and the last Volga German bishop till Bishop Joseph Werth.

Education and activity as a cleric

After he finished his studies in the Saratov Priest Seminary, he was ordained in 1889. He graduated from Roman Catholic Theological Academy in St. Petersburg with the degree of Master of Theology. In the same year, he started teaching at the Saratov Priest Seminary. During the following 13 years he took positions as a parish vicar in Simferopol (1892), a parish priest in Sulz in the Ukraine (1895), a parish priest in Chişinău (1899), a seminary inspector in Saratov (1903) and as a canon lawyer (1904). He was consecrated the 5th and last Bishop of Diocese of Tiraspol on 28 October 1904.

Resistance and persecution by the Bolsheviks

On the 14th of October 1918, before the Bolsheviks entered Saratov, Kessler left on foot and went to Odessa in the Ukraine. There he left a message declaring the power of the Bolsheviks to be a power of the Antichrist. He warned people that cooperators would be excommunicated from the church. As a result of that, the Bolsheviks conducted a Russia-wide manhunt for Bishop Kessler. He, however, secretly went into exile to Bessarabia and became a priest in the village of Krasne near Tarutyne. In 1921 he visited Kansas to raise funds for colonists in the Volga and Black Sea area, who were suffering from the famine. Because of the persecution, he resigned from the position of archbishop of the Diocese of Tiraspol in 1930 and became Titular Archbishop of Bosporus in the Ukraine (23 January 1930 – 9 December 1933). Josef Alois Kessler spent his last years in Zinnowitz, where he died on December 10, 1933. He was buried in Ornbau, Bavaria, next to bishop Franz Xaver von Zottmann.

Likely related to Justina (Kessler) Schiller, since both are from the same Volga German colony.

Is Josef your ancestor? Please don't go away!

ask our community of genealogists a question.
Sponsored Search by Ancestry.com
DNA
No known carriers of Josef's ancestors' DNA have taken a DNA test. 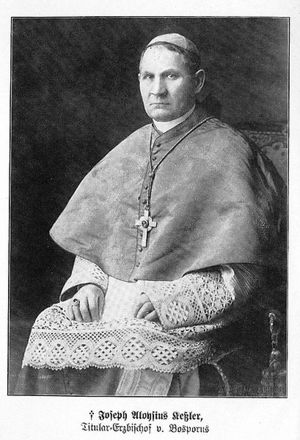 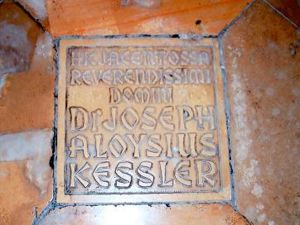