Rear Admiral Isaac Campbell Kidd was an important naval officer killed during the Japanese attack on Pearl Harbor, an attack which influenced the United States to participate in World War II.[1]

Isaac Kidd USN was awarded the Medal of Honor.

During and after the First World War, Kidd was stationed on the USS New Mexico (BB-40)[4], then had further staff and Naval Academy service.[4] He was executive officer of the USS Utah (BB-31) in 1925-26, then commanded the USS Vega (AK-17) until becoming Captain of the Port at Chrisobal, Panama Canal Zone in 1927-30.[4] Promoted to the rank of Captain, he was Chief of Staff to Commander, Base Force, U.S. Fleet in 1930-32. After three years at the Bureau of Navigation in Washington, D.C., he was Commander Destroyer Squadron ONE, Scouting Force, in 1935-36.[4]

Captain Kidd next attended the Naval War College and served on the college staff.[10] He was Commanding Officer of USS Arizona (BB-39) from September 1938 until February 1940, when he was promoted to Rear Admiral and assigned as Commander Battleship Division ONE and Chief of Staff to Commander, Battleships, Battle Force.[3][4]

RADM Isaac Kidd USN was Killed in Action at Pearl Harbor aboard the USS Arizona during World War II.
On 7 December 1941, RADM Isaac Kidd was killed in action on board the USS Arizona during the Japanese attack on Pearl Harbor.[3][5][11] He was the first Navy flag officer ever killed in enemy action, and the first American flag officer killed in World War II. Rear Admiral Isaac C. Kidd was posthumously awarded the Medal of Honor for his actions during the Pearl Harbor attack.[3] His body was never recovered.[3][12][13]

The Medal of Honor citation of Rear Admiral Isaac C. Kidd (as printed in his official Navy Office of Information Biography, June 1974):

"For conspicuous devotion to duty, extraordinary courage, and complete disregard of his own life, during the attack on the Fleet in Pearl Harbor, Territory of Hawaii, by Japanese Forces on December 7, 1941. He immediately went to the bridge and as Commander Battleship Division ONE, courageously discharged his duties as Senior Officer Present Afloat until the USS ARIZONA, his Flagship, blew up from magazine explosions and a direct bomb hit on the bridge, which resulted in the loss of his life."

Can you add any information on Isaac Kidd? Please help grow this WikiTree profile. Everything you see here is a collaborative work-in-progress.

Thank you to Robert Keniston for creating Kidd-1247 on 21 Nov 13. Click the Changes tab for the details on contributions by Robert and others.


Memories: 1
Enter a personal reminiscence or story.
Bill Sekel Jr
Several days after the attack salvage crews found a US Naval Academy ring fused to the bulkhead and pried it loose, the name engraved inside was that of Isaac Campbell Kidd.
posted 13 Nov 2014 by Bill Sekel Jr   [thank Bill]
Login to add a memory.
Sponsored Search by Ancestry.com
DNA
No known carriers of Isaac's DNA have taken a DNA test. 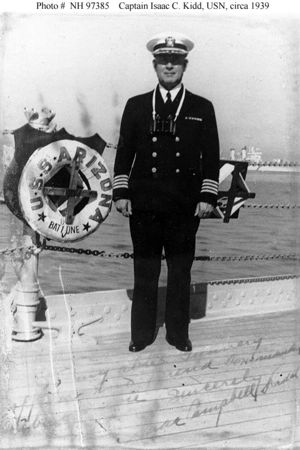 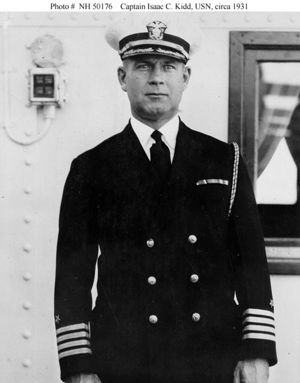 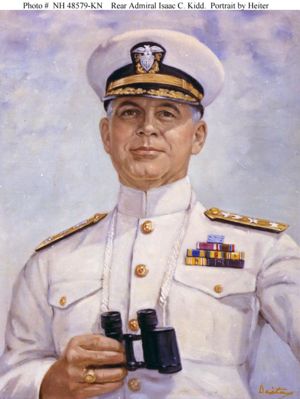 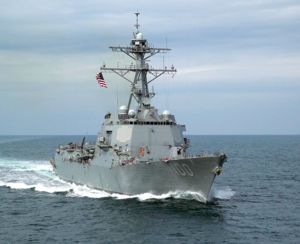 Leave a message for others who see this profile.
There are no comments yet.
Login to post a comment.
Tina (Lane) Slack
Welcome to the family what joy was in my heart to know we are related what sorrow I have today for you rest in peace
posted Dec 08, 2017 by Tina (Lane) Slack

Can I jump in and lend a hand? Let me know when you're done and I'll give her a once over. It's looking great!

I am going to feature RADM Kidd in the Connection Finder next week in honor of the Pearl Harbor attack. You've done a great job with his profile! Do you want to add some inline citations or would you rather I tweaked things a little? Either way is fine with me. I might also add a background and make him part of the World War II project, if that's okay? He deserves the visibility :-)

Let me know what you think!