Rufus King was a Founding Father in the American Revolution

Rufus King was an American diplomat, politician and framer of the U.S. Constitution. He was also a delegate and a Senator from New York.

Rufus was born March 24, 1755 in Scarboro, Maine (originally a district of Massachusetts). He was a son of Isabella Bragdon and Richard King, a prosperous farmer-merchant, "lumberman, and sea captain" who had settled at Dunstan Landing in Scarborough, near Portland, Maine, and had made a modest fortune.[3]

1777: King graduated from Harvard College where he studied law. Rufus was admitted to the bar
1780: Started practice in Newburyport.
1783-1785: He served in the Revolutionary War and was a delegate to the Massachusetts General Court.
1784-1787: Member of the Continental Congress from Massachusetts 1784-1787 and a delegate to the Federal Constitutional Convention in Philadelphia..
1788: King was one of the signers of the Constitution and a delegate to the State convention which ratified the Constitution.
1788: Moved to New York City and became a member of the New York Assembly.
1789: Elected to the United States Senate.
1796: Reelected to the Senate
1796 - 1803: Resigned in May of 1796 to become United States Minster to Great Britain.
1804: He made an unsuccessful bid as a Federalist candidate for Vice-President of the United States.
1813-1891: Was elected again as a United States Senator in 1813 and 1819. King served as chairman of the Committee on Roads and Canals (Sixteenth Congress), Committee on Foreign Relations (Seventeenth Congress);
1816: Unsuccessful candidate for Governor of New York in 1816 and for President of the United States.
1825-1826: United States Minister to Great Britain.
1827: died in Jamaica, Long Island, N.Y., April 29, 1827; buried in the Grace Episcopal Churchyard, Jamaica, Queens County, New York, USA.

His wife Mary Alsop was born in New York on October 17, 1769, and died in Jamaica, New York, on June 5, 1819. She was the only daughter of John Alsop, a wealthy merchant and a delegate for New York to the Continental Congress from 1774 to 1776. She was also a great niece of Governor John Winthrop of the Massachusetts Bay Colony. She married Mr. King in New York City on March 30, 1786,[4]The Kings had 7 children (of which 5 lived to adulthood).

Rufus King died on April 29, 1827, and his funeral was held at his N Y in Jamaica, Queens. He is buried in the Grace Church Cemetery in Jamaica, Queens, New York. The home that King purchased in 1805 and expanded thereafter and some of his farm make up King Park in Queens. The home, called King Manor, is now a museum and is open to the public.

Revolutionary War Service as from the DAR Patriot Index

Sponsored Search by Ancestry.com
DNA Connections
It may be possible to confirm family relationships with Rufus by comparing test results with other carriers of his Y-chromosome or his mother's mitochondrial DNA. However, there are no known yDNA or mtDNA test-takers in his direct paternal or maternal line. It is likely that these autosomal DNA test-takers will share DNA with Rufus: 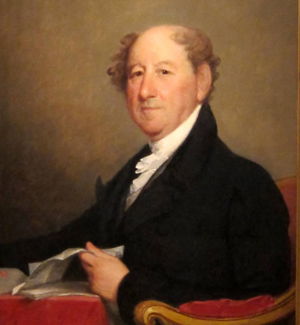 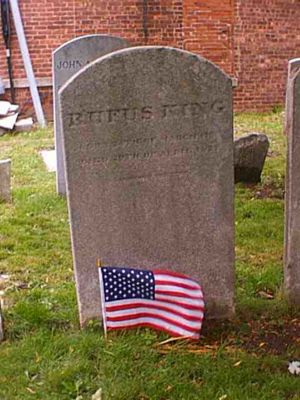