B. B. King is a part of US Black heritage.

Riley B. King was born on September 16, 1925 outside of the unincorporated community of Berclair in LeFlore County, Mississippi. He is the son of Albert and Nora (Farr) King. In 1930, after his father left their family and his mother was remarried, Riley went to live with his maternal grandmother, Elnora Farr, in Kilmichael, Mississippi. At the age of 12, he bought his first guitar. Six years later, he left Kilmichael to join the Famous St. John's Gospel Singers, headquartered in Inverness, Mississippi, as their lead singer and guitarist.

Eventually, after realizing that the other members of the quartet were not interested in pursuing a career in music, Riley moved to Memphis, Tennessee, where he lived for a time with his mother's first cousin, Booker T.W. 'Bukka" White, a well-known blues recording artist. After a brief return to Mississippi, he came back to Memphis in 1948, where he began performing in nightclubs and working as a disc jockey at radio station WDIA. His notoriety grew as he garnered the nickname "Beale Street Blues Boy" (many of Memphis' most popular blues venues are located on Beale Street), which was eventually shortened to "Blues Boy", and then finally to the initials, "B.B."

In 1949, B.B. King signed his first recording contract with Sam Phillips, who later founded Sun Records, and started his first band, the B.B. King Review. During a show at a dance hall in Arkansas that winter, a fire forced everyone to evacuate. After exiting the building, B.B. realized that his favorite guitar, a hollow-bodied Gibson electric, was still inside, so he went back in to save it. When he found out the next day that the fire had started because two members of the audience were fighting over a woman, he decided that from then on, all of his guitars would carry her name, Lucille, to remind himself never to do something as stupid as running back into a burning building to save a replaceable guitar.

With 60+ years of concerts and recordings to back up the claim, B.B.'s signature guitar licks and soulful voice have deservedly earned him the title as the "King of the Blues". He was inducted into the Blues Music Hall of Fame in 1980, and the Rock and Roll Hall of Fame in 1987. Although B.B. was diagnosed with Type II diabetes in the early 1990s, he maintained an active schedule of recording and touring for over 20 more years.

He was forced to cancel the remaining eight shows of his 2014 tour due to deteriorating health, and retreated back to is home in Las Vagas, Nevada. On May 1, 2015, he was admitted to hospice care in Las Vegas, and two weeks later, he died in his sleep on May 14, 2015 from a series of small strokes. Although B.B. is survived by his longtime friend and musical companion, Lucille, the thrill is gone. :(

Is B. B. your relative? Please don't go away!

ask our community of genealogists a question.
Sponsored Search by Ancestry.com
DNA
No known carriers of B. B.'s DNA have taken a DNA test. 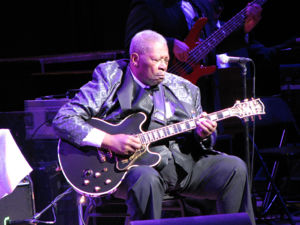