Martin King Jr. was a part of the US Civil Rights Activists Movement.

Martin King Jr. was awarded the Spingarn Medal for outstanding achievement by an African American.

Martin Luther King, Jr.[1] was born on January 15, 1929, in Atlanta, Georgia, to Reverend Martin Luther King, Sr. and Alberta Williams King.[2][3] His legal name at birth was "Michael King," also his father's given name.[1][2] King Sr. "changed" both names during a 1934 trip to Nazi Germany to attend the Fifth Baptist World Alliance Congress in Berlin.[1] He chose to be called Martin Luther King in honor of the great German reformer Martin Luther. Martin Jr. had his name legally changed on July 23, 1959.

Martin, Jr. was a middle child, between an older sister, Willie Christine King, and a younger brother, Alfred Daniel Williams King.[1] Martin and his sisters attended segregated schools in Atlanta. He graduated at age 15.[2] In 1948, he graduated from Morehouse College, the same college his father and grandfather had attended, with a Bachelor of Arts degree.[2] He earned a Bachelors of Divinity from Crozer Theological Seminary in 1951, and was president of his class.[2] He received his doctorate from Boston University in 1955.[2] It was in Boston that he met his wife, Coretta Scott.[2]

Martin's family had a legacy of serving as pastors of Ebenezer Baptist Church in Atlanta, Georgia, which Martin continued.[2] In 1954, he became pastor of the Dexter Avenue Baptist Church in Montgomery, Alabama.[2]

Martin Luther King, Jr. is best known for being an iconic figure in the advancement of civil rights in the United States and around the world, using nonviolent methods following the teachings of Mahatma Gandhi.[1][4] King is often presented as a heroic leader in the history of modern American liberalism.

A Baptist minister, King became a civil rights activist early in his career. By 1954, he was a member of the executive committee of the NAACP.[2] He led the 1955 Montgomery Bus Boycott, which led to the United States Supreme Court declaring bus seat segregation unconstitutional.[2][4] King and his family were persecuted for his persistence.[2]

He helped to found the Southern Christian Leadership Conference in 1957, serving as its first president.[2][4] From 1957 to 1964, Dr. King traveled extensively, speaking for civil rights and equality, all the while writing five books and numerous articles.[2] During one of his engagements in Birmingham, Alabama, a city noted at the time as one of the most segregated, he was arrested, and wrote his stirring "Letter from a Birmingham Jail."[2][4]

King's efforts led to the 1963 March on Washington, where King delivered his "I Have a Dream" speech.[2][4] There, he expanded American values to include the vision of a color-blind society, and established his reputation as one of the greatest orators in American history. He was named Time magazine's "Man of the Year" in 1963.[2][4]

In 1964, King became the youngest person to receive the Nobel Peace Prize for his work to end racial segregation and racial discrimination through civil disobedience and other nonviolent means.[2] He turned the prize money over to organizations to further the fight for civil rights.[2]

By 1968, King had refocused his efforts on ending poverty and stopping the Vietnam War.[4]

He was posthumously awarded the Presidential Medal of Freedom in 1977 and Congressional Gold Medal in 2004.[1]

King's efforts are memorialized in many ways, with statues, streets, schools, as well as geographical places. King County, Washington used to be named in honor of William Rufus Devane King, Vice President of the United States under President Franklin Pierce. In 1986, the King County Council voted to change it to be in honor Martin Luther King, Jr. This did not become official until passed by the state legislature in 2005. Martin Luther King, Jr. Day was established as a U.S. national holiday in 1986. He is the only non-president to have a national holiday named in his honor.[4] 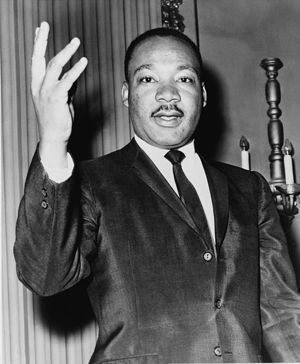 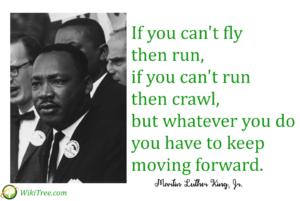 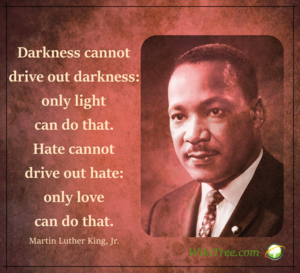 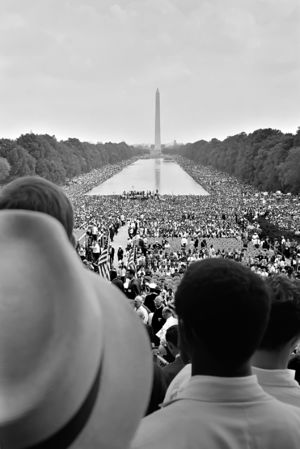 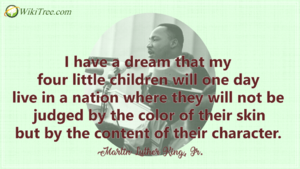 None of the sources supplied for this "fact" include this information. Source #4 no longer exists. King was assassinated by James Earl Ray, who was on the run following a prison escape.

Just now caught my eye when I was googling something else. And I see that in his father's profile it is stated: "Born Michael Luther King on Dec. 19, 1899, in Henry County, he changed his name and his son's to honor the famous German theologian Martin Luther in 1934, when his son was 5 years old." https://www.wikitree.com/wiki/King-10025

Dorjän Scott
Thank you, Mary. The name change is documented under the family section of the biography.
posted Jan 18, 2021 by Dorjän Scott

Mary Gossage
Hi Dorjän. Uh huh. Clearly I missed that skimming through the biography Was mostly checking it out the profile for formatting. Didn't carefully read the bio (obviously!) seeing that it is already done well - content, formatting, and layout. <smile>
posted Jan 20, 2021 by Mary Gossage

Michael Meggison
I had done some information on James Albert King and his father was also named James, but may have had a different surname. Megyn Smolneyak took some of my research and made it into a Huffington Post article if you want to google it (I raised my objections in comment section).
posted Jan 06, 2021 by Michael Meggison

We plan on featuring Martin alongside AJ Jacobs, the Example Profile of the Week, in the Connection Finder on January 6th. Between now and then is a good time to take a look at the sources and biography to see if there are updates and improvements that need made, especially those that will bring it up to WikiTree Style Guide standards. We know it's short notice, so don't fret too much. Just do what you can. A Team member will check on the profile Tuesday and make changes as necessary.

Lucy (Wilson) Robinson
I recently found out I'm distantly related to him so that you for writing such a good profile.
posted Oct 13, 2020 by Lucy (Wilson) Robinson
Lorene (Stasheen) Anonymous
this is interesting because -according to Wiki Relationships-he is my 16th cousin. I find this amazing because I have always admired him. But I do not think the connections in the tree are accurate. The connections that are made starting with Mary Jane Linsey are incorrect. This needs to be researched and corrected. Mary Jane Linsey is a separate person from Jane Linsey (see below) and leads to a misconstrued family history - which amazes me because his family history is very well documented, even in the national archives.

King, Jr.’s paternal great-grandfather Jim Long (born ca. 1842) had been used by his owner to breed slaves, conceiving children with several women. Census records show that after the Civil War, Long maintained at least two families in Henry County, Georgia, where he also registered to vote during Reconstruction. Long’s relationship with Jane Linsey (born 1855) produced a daughter, Delia, in 1875, who married James Albert King (born 1864) in 1895.

Lisa (Kelsey) Murphy
His "I Have a Dream" speech (the written part) was not finished until 3:30 am the morning of the speech. He still made it to the march. The officials thought legislation would be harmed and that dogs would have to be turned lose, hoses would be turned on and there would be mass problems. None of these happened. None of the plugs had to be pulled even. He read his speech but the I have a dream part was not on the paper. After reading what was written, he began to speak and that is when they listened. He is quoted as saying "The hottest place in Hell is reserved for those who remain neutral in times of great moral conflict." Meltzer, Brad, Heroes for my son, pgs 20-21, Harper Collins Publishing
posted Sep 14, 2017 by Lisa (Kelsey) Murphy
[Living Winter]
King-18094 and King-4303 appear to represent the same person because: Whoops! Someone made a duplicate in May 2016.
posted Nov 20, 2016 by [Living Winter]

Could you please change the category name to US Civil Rights Activists.

J. (Pearson) Salsbery
It would be nice to add the template,

Martin King Jr. was a part of the Civil Rights Activist Movement.
posted May 15, 2015 by J. (Pearson) Salsbery

Ed Burke
According to Wikipedia Martin Luther King sang with his church choir at the 1939 Atlanta premiere of the movie Gone with the Wind.
posted Apr 02, 2014 by Ed Burke

Philip Smith
This category can be added
posted Nov 09, 2013 by Philip Smith