Philip Gidley King, was born at 5 Southgate Street, Launceston, Cornwall, England[2], on 23 April 1758 [3]. His family had long lived in the district and were not impecunious. His father, Philip, was a draper, his maternal grandfather, Gidley, was a local attorney; but though his origin shows that for men of humble birth it was easier to advance in the navy than in the army, it proved a handicap in New South Wales where some of his critics considered him 'not a gentleman'.

King joined the navy as captain's servant in H.M.S. Swallow on 22 December 1770. After five years in the East Indies he was moved to American waters in 1775, when fighting began against the rebellious colonies, and became a midshipman in the Liverpool in July. He was commissioned lieutenant in the Renown on 25 December 1778. He returned to serve in the Channel Fleet from January 1780, and in the Ariadne he served under the command of Captain Arthur Phillip. In 1783 King sailed to India in the Europe with Phillip. On their return, since peace had been made, King was paid off. In October 1786, as soon as Phillip had been nominated to command the expedition then setting out to establish a penal settlement at Botany Bay, he chose King as second lieutenant in the Sirius, in which he was sailing himself. He took King with him when he transferred to the Supply in the hope of reaching their destination ahead of the main fleet, and a fortnight after they arrived selected him 'as a officer of merit … whose perseverance may be depended upon' to establish a subordinate settlement on Norfolk Island.

On 14 February 1788 King sailed for his new post with a party of twenty-three, including fifteen convicts. For two years he supervised this little establishment, organizing the clearing of land and the struggles against grubs, rats, hurricanes and occasionally troublesome convicts, but on the whole reporting favourably on its prospects. Despite the lack of a safe harbour, of lime and of any untimbered land, there was plenty of fish, the stock throve and the soil was good. It could maintain 'at least one hundred families', King told Phillip. Impressed by his work, the governor several times recommended his subordinate for naval promotion, but this would have raised difficulties because of King's lack of seniority; to solve the problem the secretary of state announced in December 1789 that King would be appointed lieutenant-governor of Norfolk Island at a salary of £250, and next month, in consequence, he was discharged from the Sirius; however, before this news reached New South Wales, King had sailed for England in March 1790 on Phillip's orders to report on the difficulties of the whole settlement.

King's visit to London was brief but successful. He arrived just before Christmas, saw Lord Grenville and Sir Joseph Banks, discussed the problems of New South Wales, and on 2 March 1791 was promoted commander. On 11 March he married Anna Josepha Coombe at St Martin-in-the-Fields [4] and four days later sailed, with his wife and his young protégé, William Chapman, as a passenger, in H.M.S. Gorgon (Captain Parker) to return to Norfolk Island with his commission as lieutenant-governor. On the voyage he learned at the Cape of the continued shortages in New South Wales, so on his own responsibility he bought some livestock there; unfortunately many died before they reached Sydney and the reluctance of the Treasury to recognize such unwonted if highly warranted independent action by junior officials gave rise to a protracted correspondence on the question of paying for them. After five weeks in Sydney King landed on Norfolk Island early in November, and six weeks later Anna Josepha safely gave birth to a son, Phillip Parker.

King became Governor on 28 September 1800. He set about changing the system of administration, and appointed Major Joseph Foveaux as Lieutenant-Governor of Norfolk Island. His first task was to attack the misconduct of officers of the New South Wales Corps in their illicit trading in liquor, notably rum. He tried to discourage the importation of liquor, and began to construct a brewery

During King's administration the government's flocks and herds quintupled. He bought cattle from India to improve the quality of the government stock, and though disavowing the idea of the government concerning itself with 'fine-woolled sheep', and mindful of the importance to the small settlers of the 'weight of Carcase', he was able by careful breeding to produce 'a total change in Government Flock from Hair to Wool', and to distribute ewes to settlers in expectation of a general improvement in the flocks of the colony. He began the mining of coal, which he hoped would be a profitable export, was interested in timber cutting and encouraged experiments in growing vines, tobacco, cotton, hemp and indigo. Although in the opening sentence of the first journal of his experiences from 1787 to 1790, which was published with minor revision as an appendix to Hunter's Historical Journal of the Transactions at Port Jackson and Norfolk Island (London, 1793), King had affirmed the contemporary opinion that Botany Bay was being founded simply as a penal settlement, by 1791 he was expressing great hopes for it as a Pacific base for flax cultivation and for whaling. The flax was not a success but whaling was, and both it and later sealing owed much to King's encouragement. A friend of Samuel Enderby, he advised the British government to allow the whalers to carry merchandise to New South Wales. He encouraged sealers to go to Bass Strait and whaling ships to visit New Zealand and the Pacific. In 1804 he encouraged Robert Campbell to make his experimental shipment of oil and skins in the Lady Barlow in contravention of the monopoly of the East India Co., which he had constantly urged the government to modify, and sought permission at the same time to open up trade between New South Wales and China.

King could, of course, never forget that he was in charge of a convict colony. He had to keep the prisoners in subjection, but at the same time he could not ignore the growing number of emancipists, and firmly reminded Major George Johnston that the British government had not intended the prisoners to be consigned 'to Oblivion and disgrace for ever'. King appointed emancipists to his bodyguard and enrolled them in the Loyal Associations. He laid the foundation of the future ticket-of-leave system by granting 'annual certificates' to prisoners deserving indulgence. Though he granted pardons to about 50 per cent more convicts every year than Hunter had done, he had about 30 per cent more to deal with and they included many political prisoners.

In June 1802 King imposed a 5 per cent duty on imported spirits and on merchandise brought from east of the Cape and not of British manufacture; though legally unauthorized this was not questioned, and by using it for the gaol and orphan funds he began the appropriation of colonial revenue for local purposes. He was interested in the girls' Orphan School, and though he regretted that he could not establish a similar institution for boys, he took several day-schools 'under the protection of Government' and by apprenticeship taught convict boys to become skilled tradesmen. He asked the British government to send out supplies of smallpox vaccine, and so enabled the surgeons to perform the first successful vaccination in the colony. In March 1803 he permitted the government printer, George Howe, to establish the Sydney Gazette[5], allowing him the use of the government press and type. He was sympathetic to the missionaries who visited the colony, welcomed Maori and Tahitian visitors to Sydney, and strove to keep peace with the Aboriginals. These, he told Governor William Bligh, he 'ever considered the real Proprietors of the Soil'. He refused to allow them to be worked as slaves, tried to protect their persons and their property and to preserve a 'good understanding' with them

After many disputes within the Colony, in May 1803 King asked to be given leave of absence while an inquiry was held into the state of the colony. In November the secretary of state at once accepted what he was quick to interpret as an offer of resignation, and after King received this reply in June 1804 his activities slowed down; but he was not relieved until August 1806.

When he embarked in the Buffalo on 15 August 1806 for the voyage home he completely collapsed. He could not sail until 10 February 1807, and a stormy passage around Cape Horn delayed his arrival in England until November. He pressed the Colonial Office insistently for a pension, but before it was granted he died on 3 September 1808. He was buried in the churchyard of St Nicholas, Lower Tooting, London.[6]

He had two natural sons, Norfolk (1789-1839) and Sydney (1790-1840), by Ann Inett, a convict from Worcestershire. They were born when their father was first on Norfolk Island, both were well cared for by him and rose to be lieutenants in the navy. His only legitimate son, Phillip Parker King (b.1791), married Harriet Lethbridge of Cornwall. Of King's four daughters, two settled in New South Wales: Mary (b.1805) married her brother-in-law, Robert Lethbridge, in 1826 and Anna Maria (b.1793) married Hannibal Macarthur in 1812. Elizabeth (b.1797) who married an artist, Charles Runciman, remained in England, and Utricia (b.1795) died as a child. 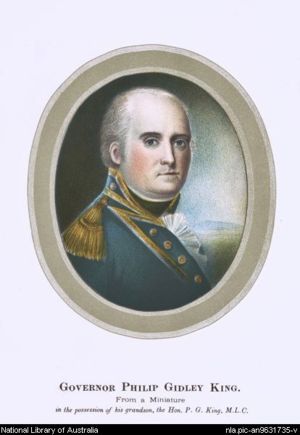 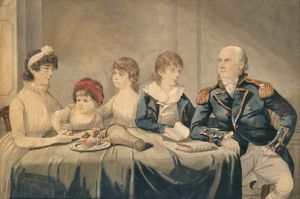 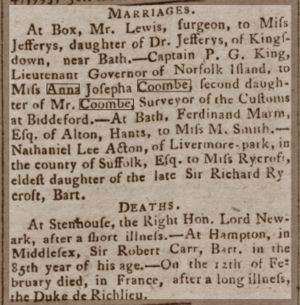 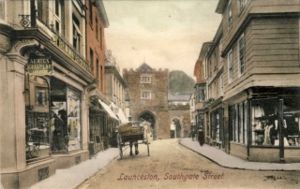 Patricia (Sparkman) Thomas
King-23677 and King-7865 appear to represent the same person because: An obvious duplicate. Same birth date, birth location. Same death date, death location. One profile has no sources. Please merge. Thank you.
posted Jan 16, 2019 by Patricia (Sparkman) Thomas
John Faulks
Looks like King-23677 should be merged with King-7865
posted Sep 25, 2017 by John Faulks
John Faulks
My guess is this King should be merged with King-7865 which has more complete information.
posted Sep 25, 2017 by John Faulks

Lorna Henderson
King-12516 and King-7865 appear to represent the same person because: Now that wife Anna has been merged, Philip also needs to be.
posted Jan 08, 2015 by Lorna Henderson