The date and place of birth of Elizabeth Kinsey are unknown, as well as the date and place of her marriage to Thomas Sparrow. The Kinseys had come from Virginia to Maryland in 1659 and Hugh obtained a grant of 400 acres on the north side of the Patapsco called Walnut Neck and Kinsey Situate. The will of Hugh Kinsey of Anne Arundel County, dated 6 May 1667, devised his entire estate to his wife Margaret “if it please God she live longer upon this earth than I” with reversion to his youngest daughter Elizabeth, with reversion to Mary Humpheys, with reversion to the rest of his children.

According to the Maryland land patents where settlers claim land for bringing people into the Maryland Colony. Hugh Kinsey transported himself, Richard Merridith, Abraham South, Mary Humphreys, Elizabeth Kinsey, Mary Humphreys, Jr., Paul Kinsey, & Edward, her [Mary's?] son. [1] After Thomas’ death Elizabeth married secondly to Richard Johns 1649-1717, on 18 July 1675, who had migrated to Calvert Cliffs in 1671. [Maryland Marriages] In Procedings of Court of Chancery in Maryland, Thomas Francis plaintiff and Solomon Sparrow, Richard Johns and Elizabeth his wife and Thomas Sparrow defendents. 7 Feb 1676. Thomas Sparrow being seized of parcel of land in Ann Arundel County called Locust’s Neck of 146 acres for 7500 pounds of tobacco sold it to Thomas Francis on 15 Oct 1667. Thomas died and his wife Elizabeth now the wife of Richard Johns and brother Solomon were executors with his infant son Thomas. Thomas Francis sought to clarify and confirm his rights.

The births of the children of Richard and Elizabeth are listed on the same page of the register for the Clifts Monthly Quaker Meeting. Richard & Elizabeth Johns are also listed in the Quaker Minutes as witnesses for wedding of William Cole Jr & Elizabeth Sparrow held at their home The Clifts.[4]

In the minutes of the Cliffs Monthly Meeting of the Society of Friends of which Richard Johns was the clerk, he wrote on the death of his wife, Elizabeth: " Elizabeth Johns, the dear and well beloved, virtuous wife of Richard and mother of this family, died the 1st day of the 12th month, 1715/6 at about quarter past 8 in the morning. [5]

Hugh Kinsey and Thomas Sparrow were both ancestors of Johns Hopkins, and both came to Maryland from Virginia, for the former in his Will mentions certain household articles "Which I brought out of Virginia," and the Norfolk county, Va., records show that 20 June, 1647," a Certificate was issued to Thomas Sparrow for 300 acres for himself and others not named.[6]

Depostion of Samuel Hooker 1764: He always understood the wife of Richard Johns the grandfather of W. Hopkins to be the daughter of Paul Kinsey. 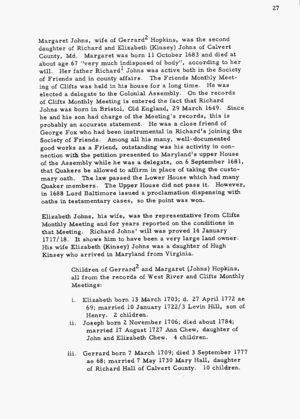 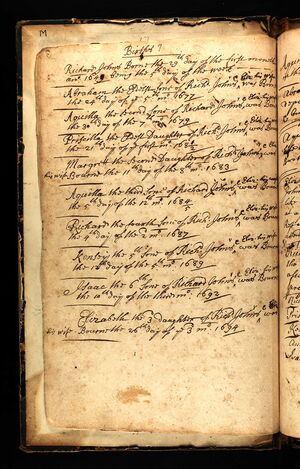